GL's Windows Client/Server software allows the user of T1/E1 analysis/emulation cards (with portable, dual, quad, and octal interfaces), the capability of remote operation, automation, and multi-site connectivity. T1/E1 Cards in a Server is easily controlled through software Clients at remote or local sites via TCP/IP sockets. Connectivity can be via Dial-Up, LAN, WAN, or more typically the Internet. Server software can run multiple tasks simultaneously at the request of the Client software. Server software is supported on Windows® XP, Vista and 7.

Now, Windows Client Server (WCS) (xx600) is available as a part of the T1/E1 analyzer basic application. However, with additional licenses, various modules can be obtained to suit a wide range of testing requirements.

Client application is distributed freely with GL's Windows Client Server (WCS) application and can be used as a template for more complex tasks. Example Clients are available in C++, TCL, C#, and Python(Ver 3.6, 3.7 and 3.8). Clients can be run under any OS, including UNIX, LINUX, Windows, etc.

The Server performs 'actions' and 'tasks'. An 'action' is in response to a 'command' initiated by a Client. The Server performs the action immediately and notifies the Client of the result. An example of such commands - actions are board configurations. A 'task' is more complicated, and usually involves real time generation and processing of data, i.e. perform BERT for 10 minutes on a T1, as shown here. Multiple tasks can be initiated without completion of previous tasks. The Server informs the Client on tasks: started, status, complete, etc. Typical tasks are real time transmission and recording of files, bit error rate (BER) testing, alarm monitoring, Digital Signal Processing (DSP) operations, ds0 power monitoring, dtmf/mf/mfcr2 digit detection and generation, protocol decoding and simulation, error insertion, and so on. For a complete list refer to the User's Manual.

GL's popular forms of T1 E1 analysis hardware such as

A T1/E1 Server can be configured with as many as four cards in a single PC. Processing constraints should be taken into account.

Screenshot of all T1/E1 Platforms

Screen Shot of Connect to Server

A Client communicates with the Server via TCP/IP encapsulated commands/tasks/responses. GL provides sample-working clients written in C++, TCL. The user may expand on these, as the user desires. Both commands and tasks are high-level functions, e.g. perform a BERT, perform HDLC decoding on TS0 and provide packets. A client can initiate multiple tasks simultaneously or sequentially (queue up tasks in succession). All exchanges between the Client and Server are displayed and can be logged to a file for later viewing. Batches of commands/tasks can be saved or loaded for efficiency. 'Cut' and 'paste' features are also provided. The frame shown here shows that hundreds of tasks can be queued up for processing and many can be executing simultaneously.

The Windows Client Python Module (WCPM) wcli_t1_e1.pyd provides a client interface to the T1/E1 WCS servers. It allows a python program to connect to one or more GWSs and execute server commands, asynchronous tasks and receive replies from GWSs. WCPM enables connection to multiple GWSs allowing the python program to control T1/E1 equipment at multiple computers and geographical locations via TCP/IP. The supported Python versions are 3.6, 3.7, and 3.8.

All the complexity of TCP/IP communications is completely hidden from users and is reduced to invoking functions with string parameters and functions returning string responses.

WCPM complies with python naming convention standards and development practices. When WCPM functions are invoked incorrectly a proper exception is thrown making it easy to diagnose and correct the problem.

The Linux Client Python Module wcli_t1_e1.so can be used on any Linux operating system .

The Real-World applications include: 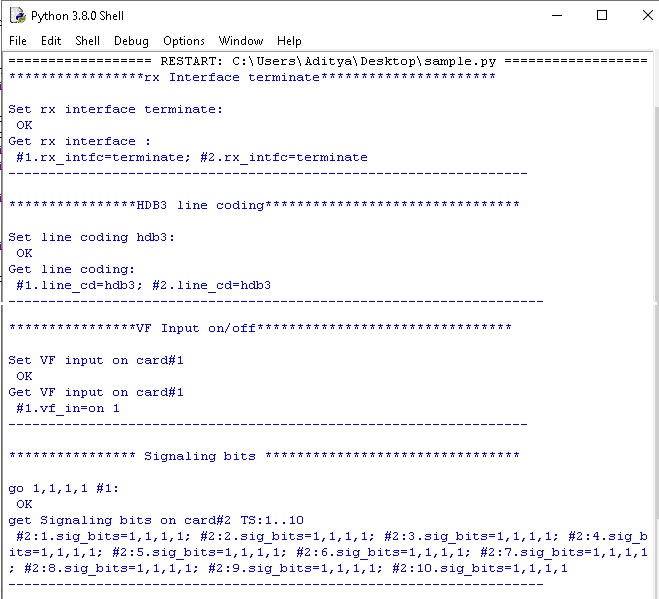 GL's VB Client is a Windows based GUI Client application that communicates with the GL's Server Software to execute and display basic functions on T1 and E1 lines. The VB Client application can be invoked as a stand-alone Client or in the case when it is co-resident with GL's T1/E1 analyzer cards, from the special application drop down menu --> WCS VB client. GL can provide free assistance in developing additional capability in the VB Client or GL Server.

C-Sharp (C#) Client is a Windows based GUI Client developed in C# language, that works with GL's Server Software to execute and display basic functions on T1 and E1 lines. Using this client, you can connect to a GLServer running on local or remote machine. You can send basic commands to the server as well as see the reply sent back by the server. Example screen shots are provided below. The source code is provided free of charge, and provides a reliable framework for rapidly developing applications with GL's Server using the .Net platform. GL can provide free assistance in developing additional capability into the C# Client or GL Server.

You must have Microsoft's Visual C# .Net version 7.1 (Microsoft's .Net framework version 1.1.4322) or above installed on your machine to build the source code. Unzip the downloaded zip file into an empty directory on your local machine. It will create a new directory called "CSharpClient". Open this directory and then double click on the file named "CSharpClient.sln" to open the C# project and then use the "Start" button on the Visual C# IDE (or use F5 key) to build and run the C# client.

The advantage of such communication is to enable the user to process the response of a server query and to use it accordingly with the added benefits of a fully capable flow control engine. TCL provides a simple scripting language, with programming facilities such as looping, procedures, and variables. Thus, users can now use the entire vast range of commands in the WCS Server in a much more beneficial way than the WCS Client.

Get the latest TCL Interpreter from http://www.tcl.tk/software/tcltk/

The GLDClient DLL provides a generic interface to core client services. Applications written in any language that supports Windows Dynamic Link Libraries can use this tool.

The GLDMClient DLL provides client applications with multi-server support through a DLL interface. Applications written in any language that supports Windows Dynamic Link Libraries can use this tool.

In addition to the above client development tools, GL maintains a growing library of sample client applications written for commonly-used platforms such as Visual Basic and Tcl/Tk. Please enquire about sample client code written for these and other platforms.

ClientDataTxRx is another WCS Server side module that provides the capability for "clients" to Tx & Rx T1/E1 data to & from the server. Instead of using the Tx & Rx files from the server location, the module uses the files at the Client location (in the case that the Server and Client are not the same PC). Now, the client can transmit and receive files or T1 E1 data directly to the server. Its main functions are:


This module is used detect and report DTMF/MF/MFC-R2 digits on channels as they occur from multiple client locations.

A Server client application is used for configuring the ISDN Layer parameters, Called/Calling Numbering Plan/Type, type of ISDN service, Place call or accept call for each timeslot or for the whole trunk, Switch and Subscriber Emulation, Simple NFAS setup for T1, and performs various other tasks on remote WCS clients.

This Client-Server application in Universal boards is used for detection, monitoring, and plotting of transmitted pulses. It includes Monitor Pulse Mask and Pulse Mask Display (pulsemaskchk.dll) modules that can be remotely controlled using simple commands by client applications. Some of the commands supported are CheckPulseMask, validate pulse, stop pulse mask validation, and others.

The Jitter measurement can be performed through commands with the Windows Client-Server application. The jitter ranges can be monitored on a specified port using simple commands by a client application.

Scripted DSP commands provide the ability to perform dynamic or time-varying operations via schedules. A schedule is a CSV file which specifies a sequence of digital signal processing steps to be performed at specified time offset for each operator on incoming and/or outgoing signals.

The File based HDLC Record/Playback (Hdlcfunc) module is an application that allows HDLC Traffic Capture/Playback. It also allows transmission/reception of *.HDL frames files located on the server and on client.

This client application simulates MTP2 and MTP3 layers of the SS7 stack. It can act as a peer end to test an SS7 stack

Suitable for conformance tests and functional tests, where test objects can be accurately, reliably and comfortably validated for compliance with ITU-T standard Q.761-764 and Q.784.

An advanced protocol simulator/tester for ISDN simulation over TDM (T1/E1) and generates high volumes of ISDN traffic. The tester can simulate ISDN signaling as defined by the ITU-T standards. Currently it is used to perform testing using ISDN protocol messages over T1/E1, and offers a complete solution for testing, troubleshooting, and maintenance of devices and networks implementing PRI ISDN.

GL's MAPS™ CAS (Channel Associated Signaling) Emulator is an advanced protocol simulator for simulating CAS signaling over TDM (T1 E1). MAPS™ CAS automates the testing procedure with the ready scripts on a single or on all timeslots. Calls are established, once the signaling information such as the signaling bits, MF, DTMF, or tones are detected. Client application simulating all CAS protocols, including wink-start, loop-start, ground start, R1, MFC-R2, etc.

GL's MAPS™ MLPPP Emulator is an advanced protocol simulator for PPP/MLPPP simulation over TDM (T1E1). Ready scripts are capable of generating and receiving MC-MLPPP/PPP traffic (with or without impairments) automating the test procedure.

Inverse Multiplexing for ATM (IMA) can be emulated on up to 16 T1/E1 lines using GL's client-server based IMA Emulation software module. All the operations that are performed using GUI can also be performed in CLI making it suitable for automated testing.

The MFR Emulation module is used to simulate FR links and MFR bundles with or without impairments. The traffic can be transmitted and received by creating virtual channels on the selected FR links or MFR bundles. All the operations that are performed using GUI can also be performed in CLI making it suitable for automated testing

The File based Record/Playback over FDL (FdlFunc) module is an application that allows to receive and transmit HDLC frames and signals in *.hdl file format over facility data link (FDL).

Multi-channel BER Testing server function allows the user to take advantage of the more advanced features of the HD boards. It supports transmit and receive of *.ber files, bit inversion on Rx pattern, and logic errors insertion for Tx and Rx patterns.

Traffic Classifier is an application that can analyze the traffics such as voice, fax, data, and tones (dial tone, ring-back tone, busy tone, so on) and also identify dialing digits and other events happening on a T1/E1 network

The software can transmit and receive the fax information as electrical signals over the T1/E1 lines. The contents (text or images) are sent as a graphic image. The receiving end reconverts the coded image and creates a copy of the document.

Back to List of T1E1 Basic and Optional Applications Index Page