Point-to-Point Protocol - PPP (RFC 1661) is a link layer protocol, which encapsulates other network layer protocols like IP for transmission on synchronous (like T1/E1) and asynchronous communications lines. When transmitted over T1/E1 line, PPP frames are based on HDLC frame structure. The PPP encapsulation provides for multiplexing of different network-layer protocols simultaneously over the same link. Other optional facilities provided are authentication of the identity of its peer on the link, and determination when a link is functioning properly and when it is failing.

Multi-Link PPP (RFC 1990), bundles multiple link-layer channels into a single network-layer channel. A bundle can consist of multiple physical links of the same type or physical links of different types. Data sent through this channel will be distributed among all the links. It is a technique used to derive larger bandwidth pipe by aggregating smaller bandwidth pipes e.g. from multiple T1s or E1s. The protocol allows splitting, recombining, and sequencing datagrams across multiple data links into a single logical pipe or bundle.

The Multi-Class extension to Multi-Link PPP (MC-MLPPP) (RFC 2686), allows a sender to fragment the packets of various priorities into multiple classes of fragments, and allows high-priority packets to be sent between fragments of lower priorities.

GL’s MAPS™ MLPPP is an advanced protocol simulator/tester for MC-MLPPP/MLPPP/PPP protocols over TDM (T1 E1). The tester can simulate a complete PPP/MLPPP link between two peers (Router or a Switch), with MLPPP signaling conforming to IETF specifications..

MAPS™ MLPPP conformance scripts, suitable for conformance tests and functional tests, where test objects can be accurately, reliably and comfortably validated for compliance with IETF standard. It is suitable for manufacturers, network operators and service providers to address all stages of the development cycle, regression testing through to type approval, acceptance testing.

The application gives the users the unlimited ability to edit MLPPP messages and control scenarios (message sequences). "Message sequences" are generated through scripts. "Messages" are created using message templates. The application supports powerful utilities like Message Editor, Script Editor, and Profile Editor which allow new scenarios to be created or existing scenarios to be modified using MLPPP messages and parameters.

GL also provides an independent GUI based PPP protocol analyzer (optional application – XX135) for online capture and decode of the signaling in real-time both during tests and as a stand-alone tracer for live systems.

A typical signaling exchanged between two peers in PPP network is as shown below. 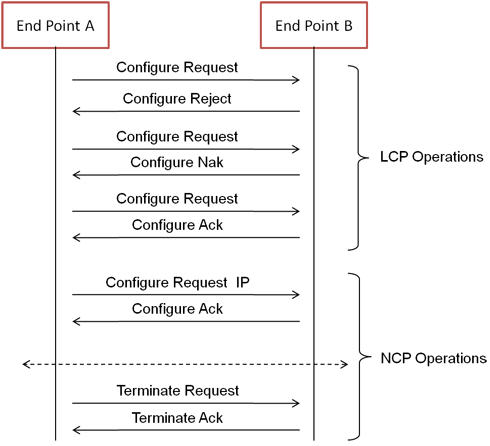 MAPS™ MLPPP is configured with the conformance script to receive the Configure Request message and reply with a valid Configure-Ack. The test script is considered to be successfully executed, when the DUT sends the Configure-Nak suggesting new Magic Number.