The above diagram depicts some of the internals of the Long Term Evolution (LTE) network. The user (UE) has very high speed RF connection to the nearest local tower. This high speed connection is always ON, as long as the mobile is powered up. LTE is an all IP infrastructure with service priority built in – audio and video are given priority. All necessities like IP address, authentication, and security are validated. Instant resources over RF (the air) and IP (internal network) are made available depending on what the user is attempting to do. Also, LTE is designed for compatibility with older 2G and 3G mobile systems.

eNode B is the base station in the LTE/SAE S1 interface and also includes MME (to handle signaling of control plane) as shown in the network diagram above.

By mimicking real-world customer behavior in lab environments, our solutions allow mobile operators and equipment manufacturers to verify their wireless networks before deployment. In other words, one can setup a virtual real-time network simulating all the network elements using “MAPS 4G Wireless Lab Suite”. The test suit supports simulation of S1-MME, S11, S5/S8, and other eGTP interfaces along with Diameter interfaces. 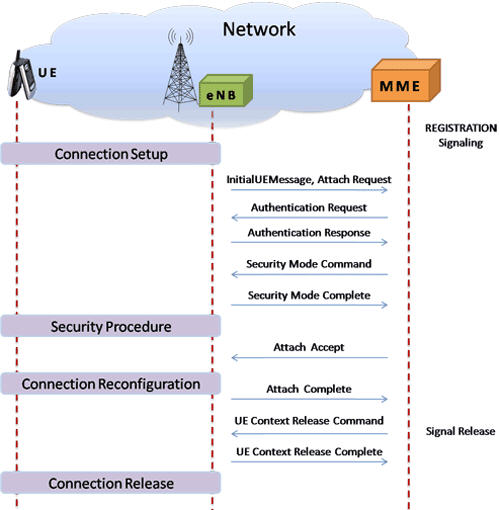 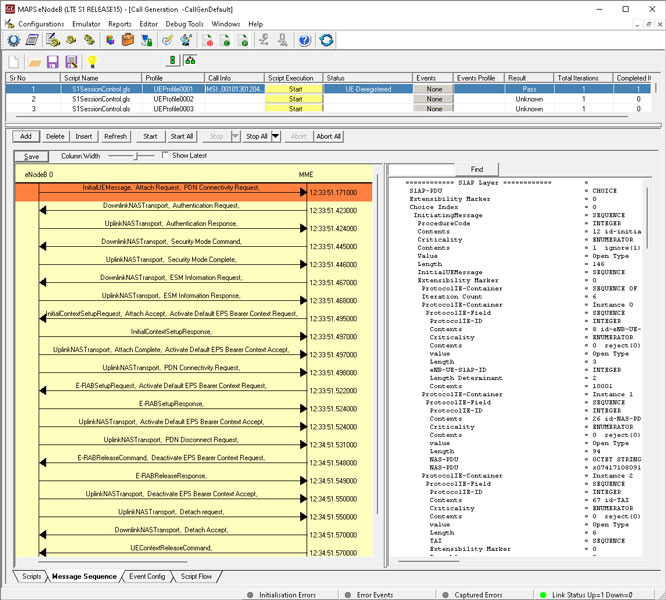 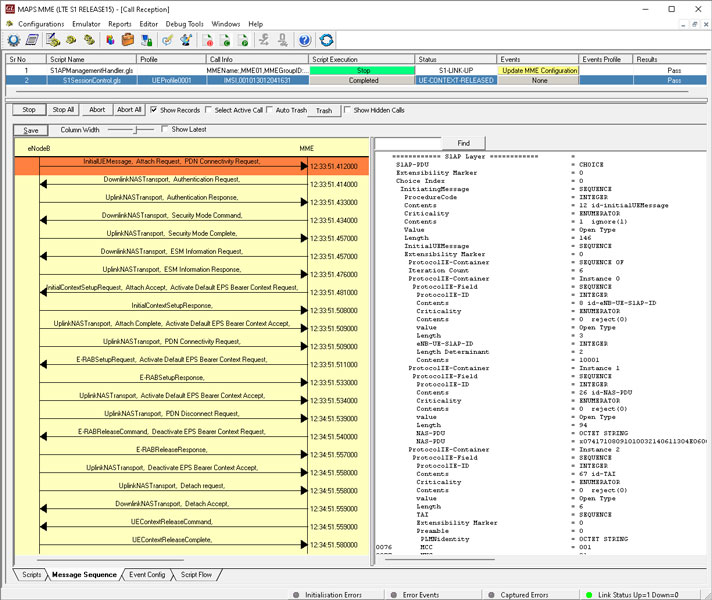 As seen in the configuration scenario below, MAPS™ LTE S1 emulator can be configured as MME with conformance script to simulate various network side procedures conforming various success/failure test cases and automating the entire eNodeB (DUT) testing.

The following depicts the success and failure Handover procedures between the source and target eNodeB entities and MME, where MAPS™ LTE S1 Conformance acts as MME: 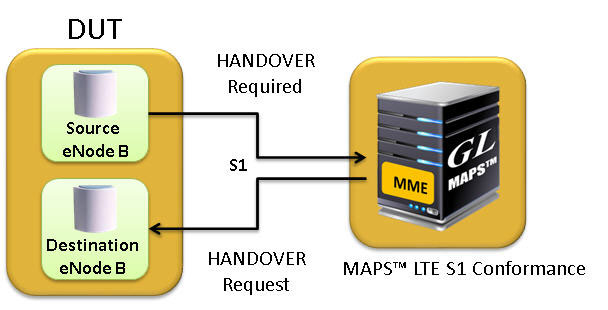 The below screenshot depicts, MAPS™ LTE S1 Conformance loaded with S1SessionControl.gls conformance script, which ensures that the on initiation of handover procedure from DUT Source eNodeB (UE), MME sends handover request to the Target eNodeB. 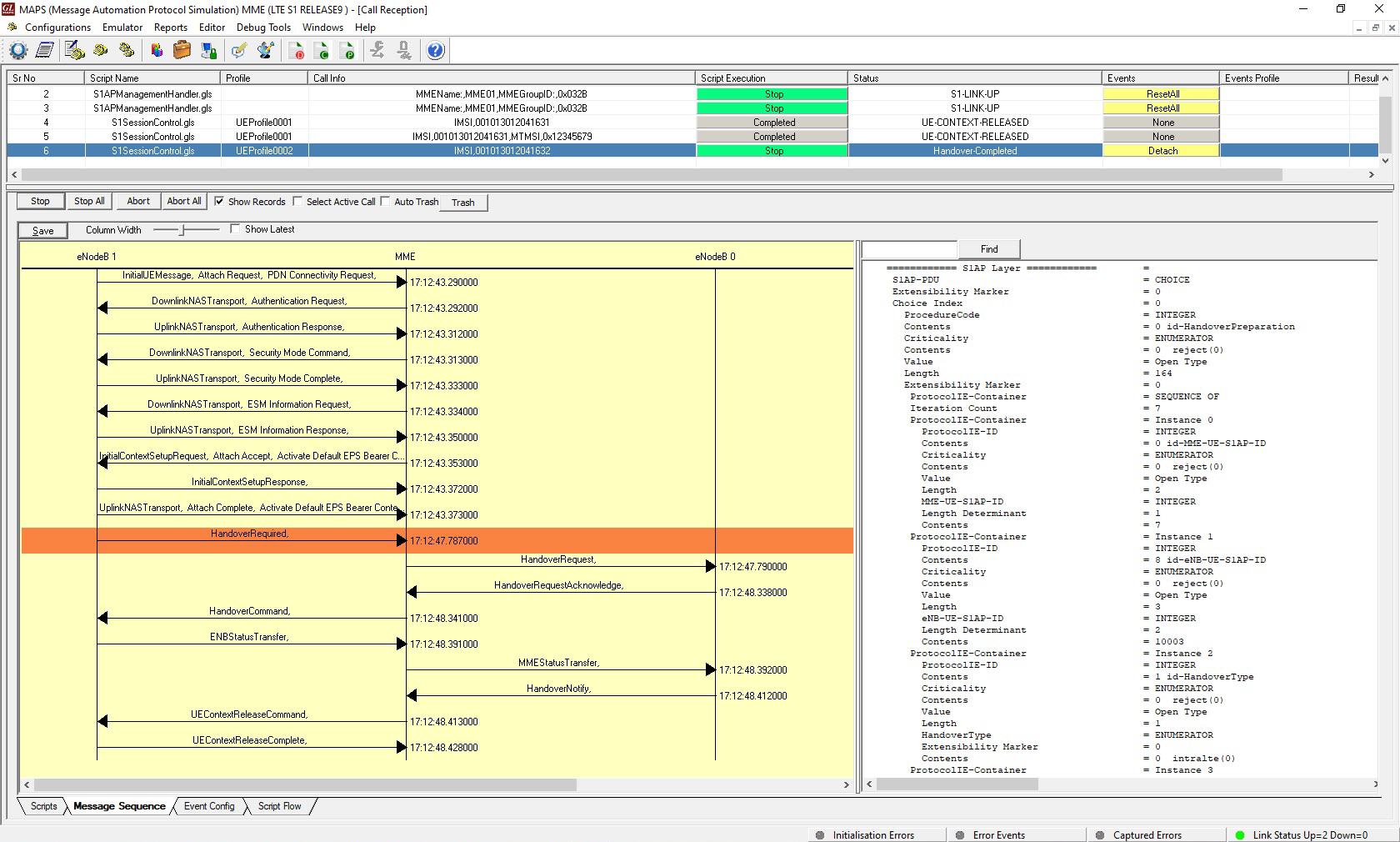 The below screenshot depicts, MAPS™ LTE S1 Conformance loaded with S1SessionControl.gls conformance script, which ensures that MME will initiate the handover preparation failure towards source eNodeB with proper cause, when Source eNodeB (UE) initiates the handover procedure and the Target eNodeB initiates handover failure with cause.

The occurring traffic events can also be verified in the MobileIpCore Server window as show in the below screenshots. Event Log contains a log of events reported by scripts.

Mobile Traffic Core – Gateway module allows simulation of Gateway and transfer user plane data from RNC to GGSN. It handles GTP tunnels on both direction of SGSN. It can also act as GGSN for user-plane traffic by encapsulating IP traffic over GTP. This module is supported in MAPS™ LTE S1, MAPS™ GnGp, MAPS™ LTE eGTP-c