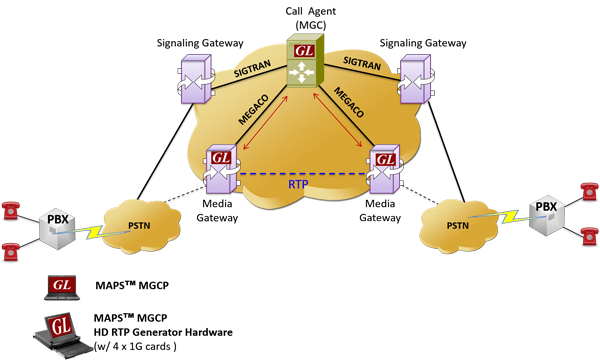 GL's Message Automation & Protocol Simulation (MAPS™) designed for MGCP testing can simulate MGC to test Media Gateways with various types of calls. It can also control scenario involved in Media conversion. This test tool can also be used to perform protocol conformance testing (MGCP protocol implementations) as per IETF Standard according to RFC 3435.

The MAPS™ MGCP Protocol Conformance Scripts is designed with 70+ test cases, as per RFC 3435. Test suite includes in-built scripts, which tests the functionality of the Media Gateway for MGCP protocol valid and in-valid behaviour.

With the purchase of RTP Core license (PKS102), MAPS™ MGCP supports transmission and detection of various RTP traffic such as, digits, voice file, single tone, dual tones, IVR, FAX*, and Video*. With regular RTP traffic, the maximum Simultaneous Calls up to 2500, and Calls per Second up to 250 is achievable. Almost all industry standard voice codec supported.

MAPS™ can be configured as a Media Gateway (MG) and as Media Gateway Controller (MGC) to simulate the entire registration and call procedures between the two entities.

MAPS™ (Media Gateway) indicates to MGC that it is in the process of restarting with Restart In Progress (RSIP) command Media Gateway informs MGC with RSIP command about rebooting of the Gateway, and it also indicates the resources available in the Gateway to place a Call.

Testing MAPS™ include inbuilt MG basic and conformance scripts (*.gls) that allows itself be configured as a Media Gateway Controller (MGC). It can generate calls to a device under test (DUT) and receive incoming call from DUT. The Device under Test can be any Media Gateway (MG), or Trunking Gateway.

As depicted in the scenario below, MAPS™ acts as MGC, so that entire MG (Media Gateway) testing can be automated.

For example, the inbuilt TX_MGC_TP_MG_V_CR_01.gls conformance script is executed to ensure that the MGC sends CRCX with mandatory parameters. The DUT (MG), on receipt of a valid CRCX message with a call id, responds with a 200 message.

For the following test scenario, MAPS™ for Sigtran & MGCP (single interface application) can be configured as SGs and MAPS™ MGCP HD as MGs creating multi-interface network at MGC.

The procedure below depicts the end-to-end message flow between the SGs and MGs nodes via MGC, simulating multi-interface in the MGCP network.

GL’s MAPS™ MGCP can be configured to act as MGC, controlling singling between the SGs and handling bulk traffic between the MGs in a multi-Interface MGCP network. The screenshot below depicts the SS7 Sigtran signaling flow between the SGs and MGCP procedure between MGs simulated using MAPS MGC (multi-interface). 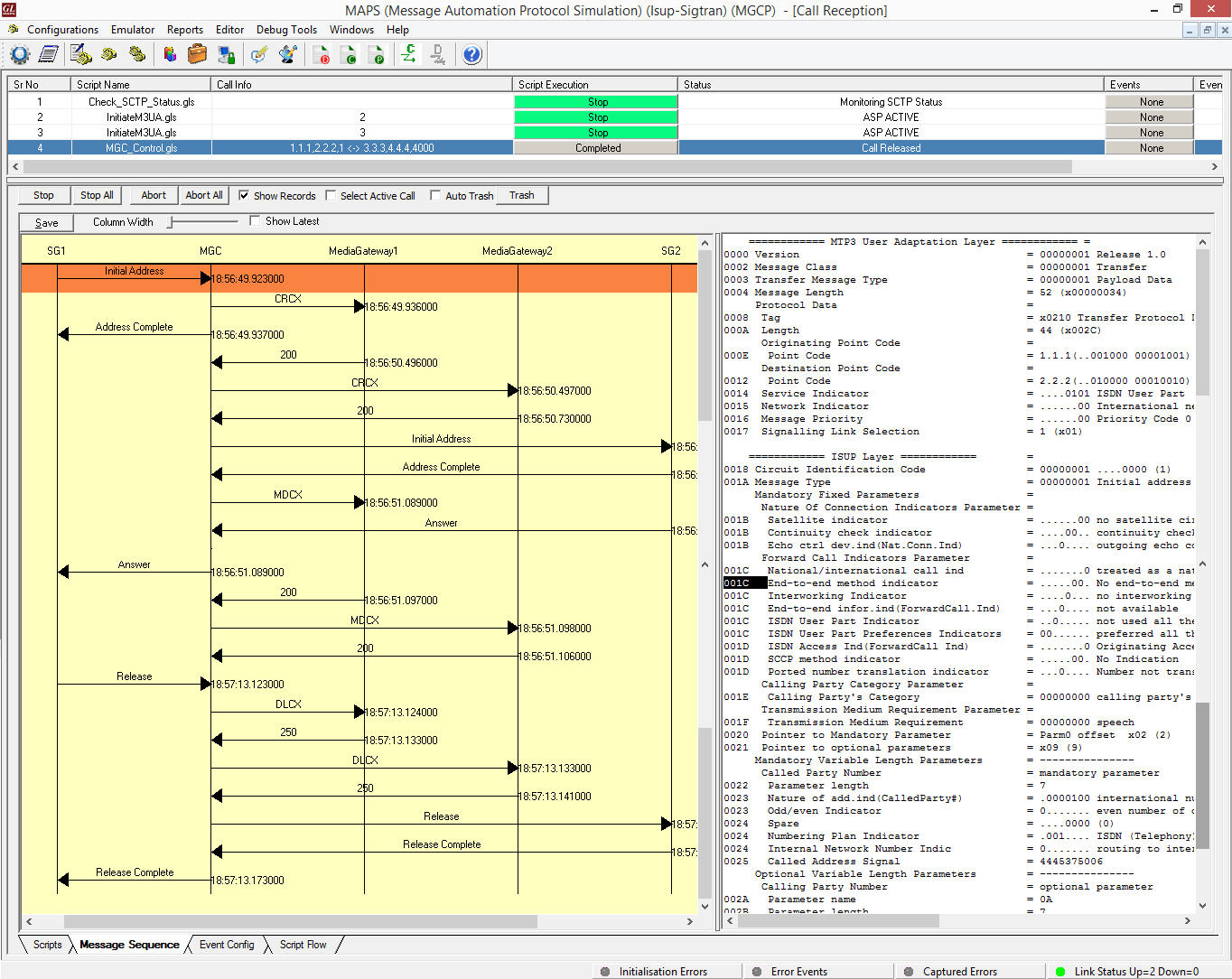 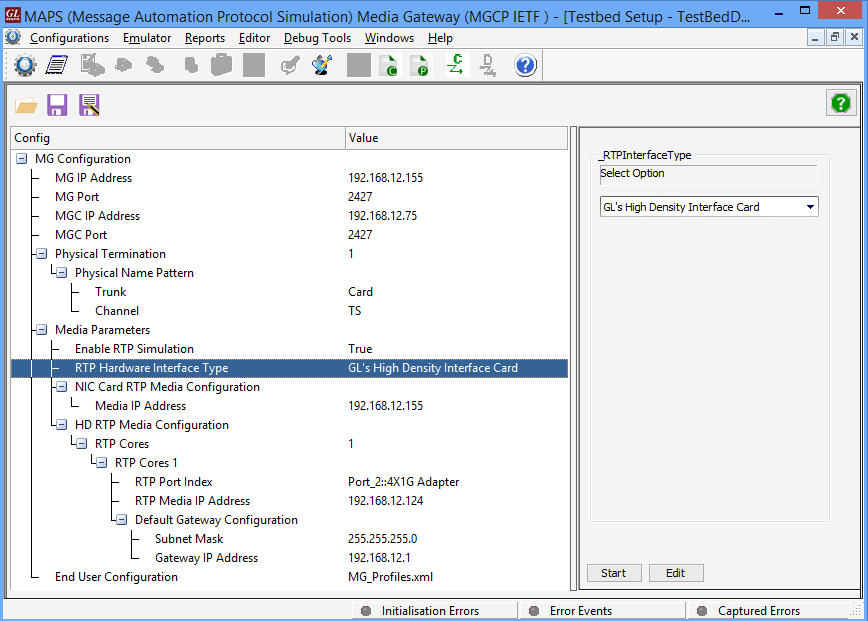 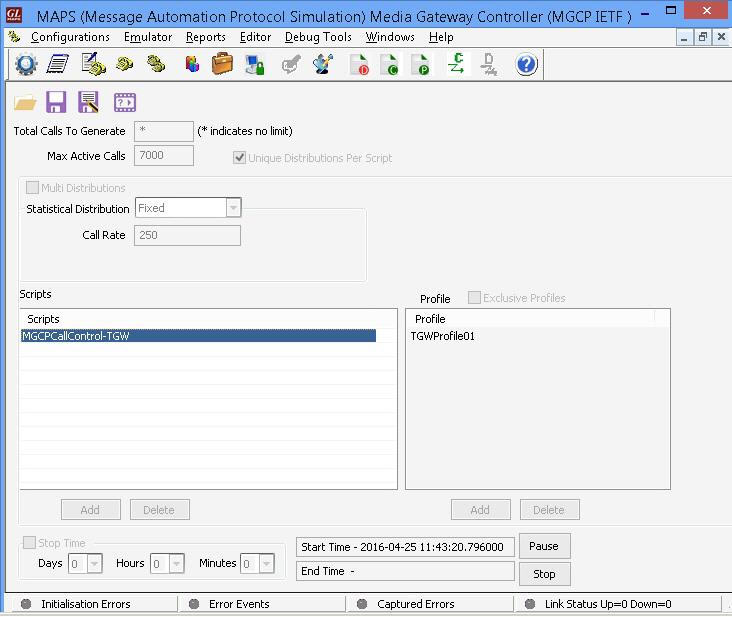 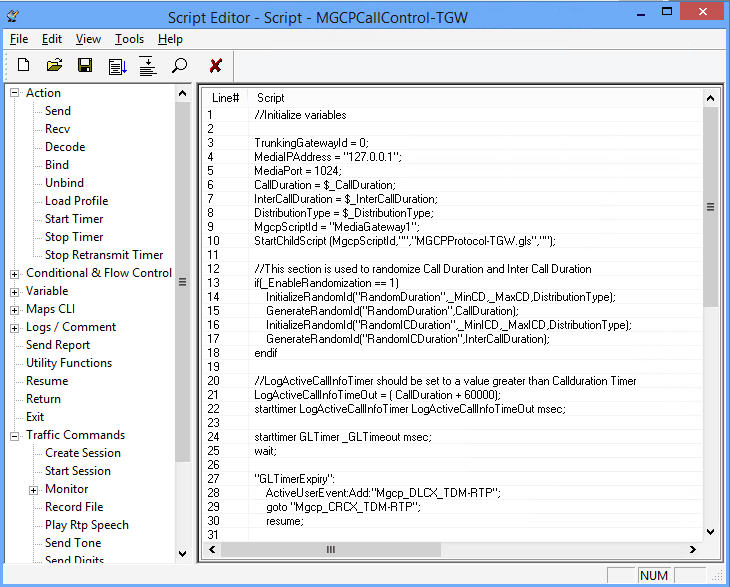