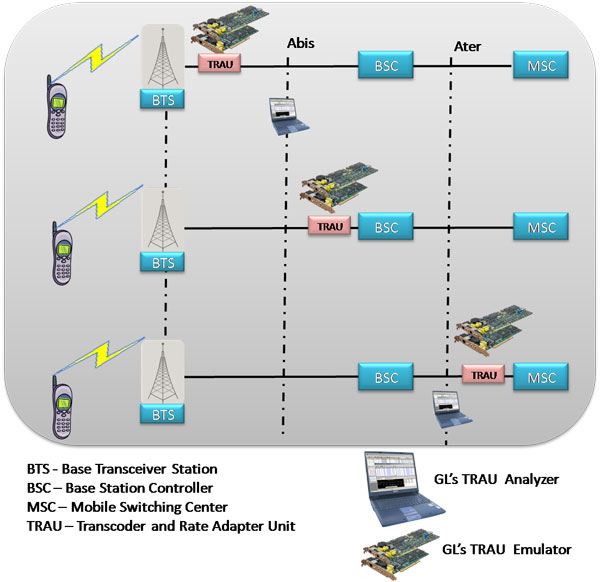 GSM technology dominates the wireless communication services in the world. A-bis interface (between Base Transceiver Station - BTS and Base Station Controller - BSC) within GSM network carries voice, data and signaling. The BSC is responsible for the exchanges of messages towards Mobile Switching Center - MSC and BTS. To slash the bandwidth consumption on the BSC-to-MSC interface of the backhaul network, service providers use transcoders or voice compression technology. Although BSC performs transcoding, in some places, the transcoders, also known as TRAU (Transcoder/Rate Adapter Unit), are found as a separate sub-system. TRAU at the BTS and BSC/MSC perform compression/decompression of speech channels within the radio cellular network. Transcoders may be at the A-bis interface (BTS to BSC links), and A-ter interface (BSC to MSC links). TRAU carries speech, data, O&M frames at full rate or half (8/16 kbps) rate and control information, over T1/E1 in a GSM network.

The TRAU Traffic Playback is an application used to generate TRAU traffic on T1/E1. The tool provides the ability to playback the recorded TRAU HDL file(s) using TRAU Analyzer on selected/all subchannels of T1/ E1 lines. The application allows the user to transmit a single file or multiple files on the desired subchannels at any given time. TRAU frames are time-aligned as per the control information in the frame.

TRAU Toolbox™ is an ideal tool to test network elements at A-bis and A-ter interface. The tool can be used to create, monitor, and terminate multiple TRAU/GSM traffic (TRAU sessions). Once the TRAU session is created, different kinds of audio/voice/digits can be generated and analyzed on GSM call with various codecs. TRAU Toolbox™ can emulate TRAU node at BSC/MSC end or CCU node at BTS end including the compression/decompression of speech that takes place at TRAU side or Mobile side. TRAU frames are time-aligned according to control information. The traffic generated by a BTS is transported to the corresponding BSC across a network is referred to as the backhaul network. The TRAU Toolbox™ can be used to test this backhaul network.

The Multi-Channel TRAU Tx/Rx Emulation and Analysis (TrauTerr) module is an optional application that allows testing of TRAU frames. The WCS TRAU Tx/Rx Emulation (TrauTerr) module is available as a GUI based client as well as command-line based client application, which simulate TRAU/CCU (BTS or BSC end) on GL's T1/E1 cards. The application is capable of generating and receiving TRAU traffic (with or without impairments) based on the codec type, and time alignment (if specified). The frames are transmitted through the 16 or 8 kbps channels. Traffic source can be sequence number, HDL files (containing packets/frames), flat binary file, and user-defined frames (ASCII HEX string/file). This application can be used to test the correctness of the received data, by comparing with predefined patterns.