This optional software (XX020) permits the user to transmit and or capture any signal on T1 or E1 lines with GL's T1/E1 analyzer. Typical applications include transmission or capture of prerecorded video files, traffic loading applications and protocol analysis.

Features and applications are as follows:

The capture application permits capture of data directly from T1 or E1 timeslots to a file.

Main features available with this optional software are:

This application permits capture of data being transmitted on (any one or all) T1 / E1 cards to a file.

Main features available with this optional software are:

The 'Automated Record/Playback (ARP)' application is an extremely versatile and rugged application incorporated in T1/E1 analyzer that makes it very easy for the user to run several transmit or receive operation tasks simultaneously. The basic tasks performed by this application are similar to the 'Playback File' and 'Record Data to File' applications. Each task runs in a separate thread similar to the functionality of the console-based Transmit/Receive File Utility (TRFU). The status of each task is displayed in the Task Results Viewer. The Automated Record/Playback application further supports subchannel and multiple subchannel streams for transmission and reception.

The Tx/Rx Data Entry dialog allows the users to specify the conditions for transmitting or receiving tasks as shown in screen below. 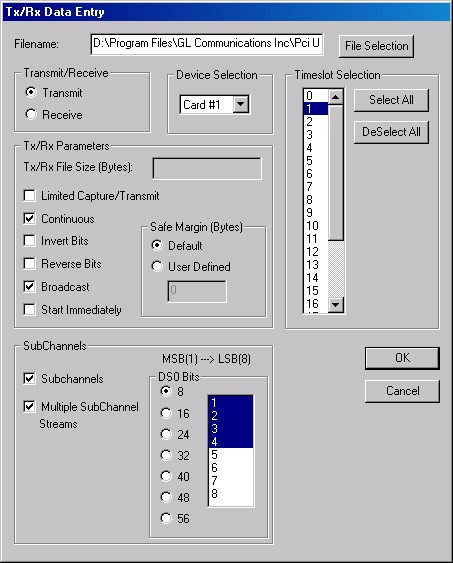 The status of each task can be monitored in the Task Results Viewer (TRV). The main purpose for this window is to inform the user as to how each task is performing its assigned function. There are seven different types of status messages that are posted as shown in the screen below:

Automated Continuous Capture (ACC) allows users to capture different types of data (*.ala, *.ula, *.pcm, *.wav, *.ber) continuously into different files. Instead of capturing data from a card in one big block, it is possible to capture seamless chunks of data in files of the specified size, or specified time limit of capture.

This file naming convention saves the trace files with user-defined prefixes along with the numbers indicating the sequence of the file. Select Sequential File Names radio button and enter a name in the file name prefix entry field. Use the slider control to indicate the total number of files to be saved.

Enter the file name prefix as 'ff' and set the slider control to third position of the ruler in the number of digits slider box. Now the files will be saved from ff000 up to ff999 in the user-defined directory.

ACC provides the user with the following types of continuous capture options:

This is the process by which the user can control the captured files being written and reused. The following options are given to the user:

For a clearer explanation, refer to the cases below. In the following cases, it will be assumed that the # of sequence digits will be 3.

GL’s Synchronous Trunk Record Playback is used to record live T1 E1 traffic and saves it to a file in FILE-TIME structure. It has both Record and Playback features that synchronously record any type of traffic (voice, digits, and tones) on many complete T1 or E1 line and playback recorded files to recreate the transmission exactly as it occurred.

Back to List of T1E1 Basic and Optional Applications Index Page