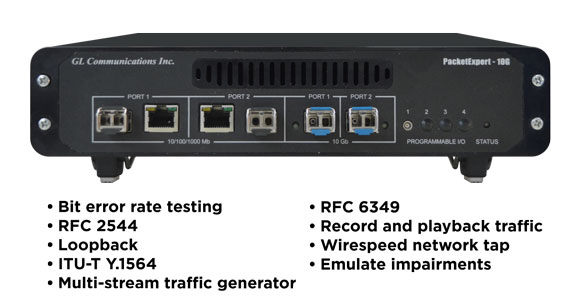 In Layer1 testing, data is carried over Layer1 frames. Only the Preamble, SFD and Frame Check Sequence are present. Apart from these fields, the entire frame consists of the payload (BERT pattern).

Layer4 configuration requires source and destination UDP ports to be defined. User can choose to allow hardware to calculate/verify checksum or provide a fixed value.

BERT Rx provides an option to process frames, even if they have FCS errors, as if they were normal BERT frames.

IP WAN Link Emulators help to test the performance of such WAN network-dependent applications by emulating the WAN conditions in a local setup easily and cost effectively. Typically, WAN links suffer from Packet effects such as Packet Loss, Packet Corruption, Packet Duplication and Packet reordering with additional burden on end-to-end applications to compensate for these impairments. Such frames are dropped at end points causing retransmissions.

IPLinkSim™ option with PacketExpert™ platforms (PXG100 and PXN100) also supports a single stream WAN IP Link with a 10 Gbps or a 10/100/1000 Mbps full duplex link, where all the incoming traffic is streamed as a single link which can be modified to simulate network impairments.

Simply connect PacketExpert™ IPNetSim™ or IPLinkSim™ unit in series with existing optical or electrical links and introduce any impairment type to test the various applications in the lab prior to live deployment. 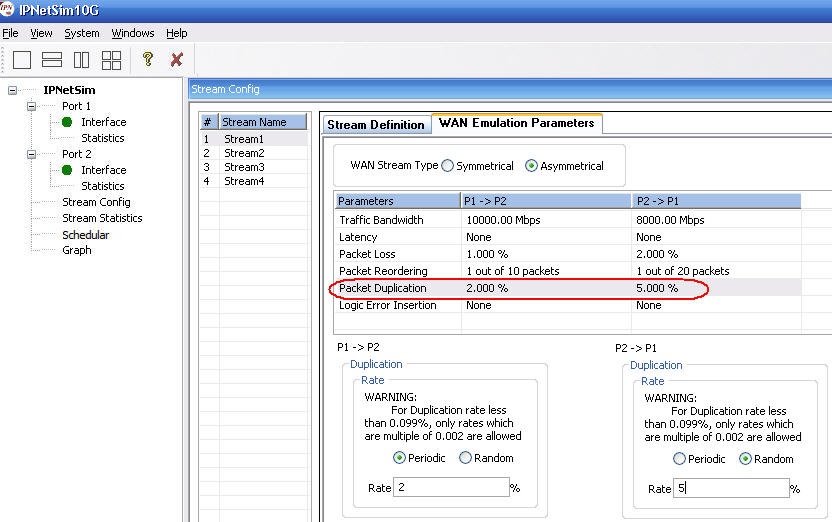 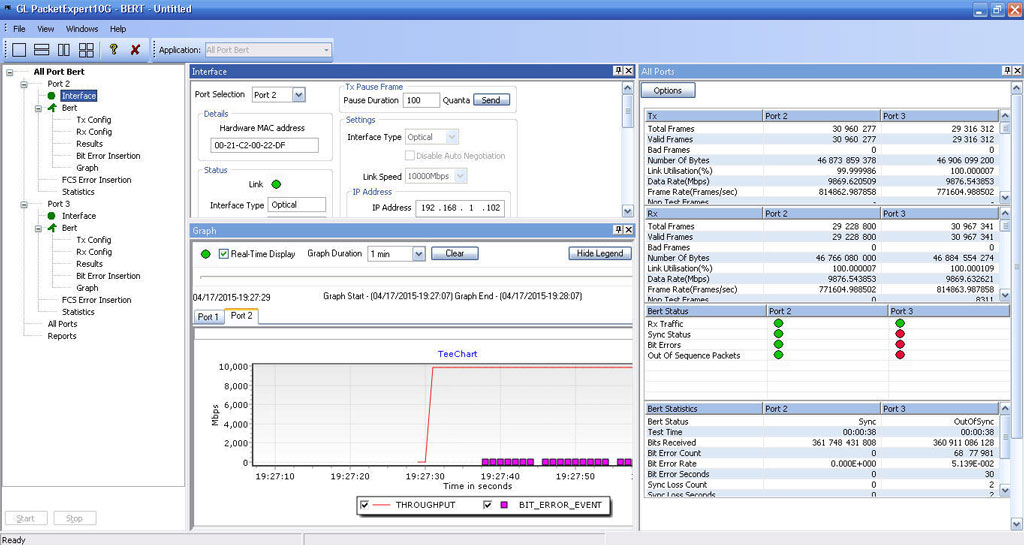 PacketExpert™ 10G supports RFC 2544 tests up to 10 Gbps. RFC 2544 tests includes Ethernet Throughput, Latency, Frame Loss, and Back-to-Back performance tests in accordance with RFC 2544 specifications. The test is setup such that the traffic can be generated and transmitted on either of the ports and the looped back traffic from the DUT is received on the opposite port validating the test parameters. 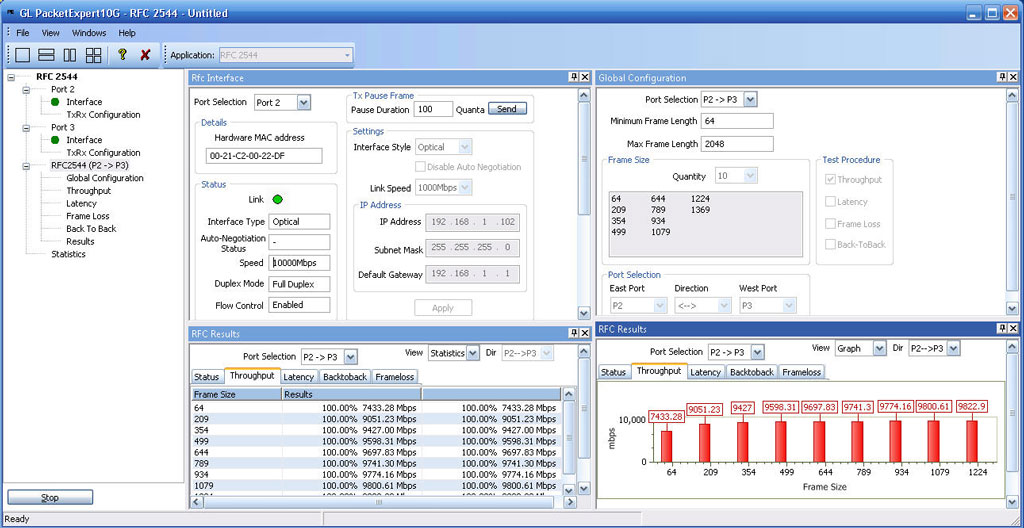 Wirespeed Record application supports capturing traffic on both the 1G and 10G ports at full line rate simultaneously (10 Gbps * 2/1 Gbps *2), without disturbing the link. Internal 8GB of DDR3 memory allows capturing up to 8GB of traffic (from both ports) at full Wirespeed (10 Gbps/1 Gbps). The captured traffic can be transferred to the host PC for offline analysis. Capture formats supported are PCAP, NGPCAP (popular wireshark formats), DAT (GL proprietary Raw format), HDL (GL proprietary PacketScan™ format). Continuous capture can be achieved with "Wirespeed filters" to filter out traffic-of-interest, and continuously record to file on the hard disk.  Up to 32 filters (16 per port) can be defined.

PacketExpert™ - ExpertSAM™ module is a single test conducted to validate service-level agreements (SLAs) as per ITU-T Y.1564 standard. ExpertSAM™ is intended for multiservice testing to measure the maximum performance of the DUT or the Network under test. In particular, it is aimed at solving the limitations of RFC 2544 test. ExpertSAM™ defines a methodology to test Ethernet-based services to carry a variety of traffic. PacketBroker is another optional application supported on GL’s PacketExpert™ 10G that allows the test tool to be used as a highly precise non-intrusive Wirespeed Ethernet Tap with all the necessary features such Pass through Tap, Hardware Filtering, Packet Modification and Output aggregation.

Up to 32 Wirespeed filters on each port (16 per port) allows to capture traffic of interest, modify the captured packet to insert useful information such as nanosecond precision timestamp, Port number etc., and forward the modified packets on the output port to be analyzed using packet analysis applications like GL’s PacketScan™.

PacketExpert™ 10G operation is bi-directional, which means that both transmission directions are simultaneously processed by the equipment. 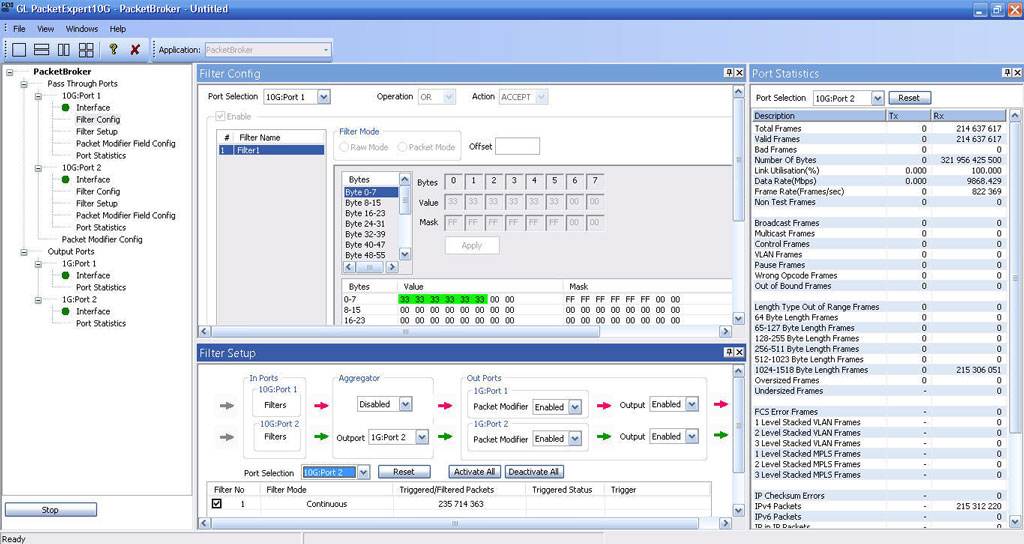 The Port#2 on PacketExpert™ 10G offers Smart Loopback functionality on both 10G/1G to loopback the incoming traffic back to the source in the network. Loopback option helps in easy test setup, especially in end-to-end testing, when the other end is in a remote place. In such cases, one PacketExpert™ 10G can be put in constant Loopback at the remote end, and tests can be controlled at the local end. 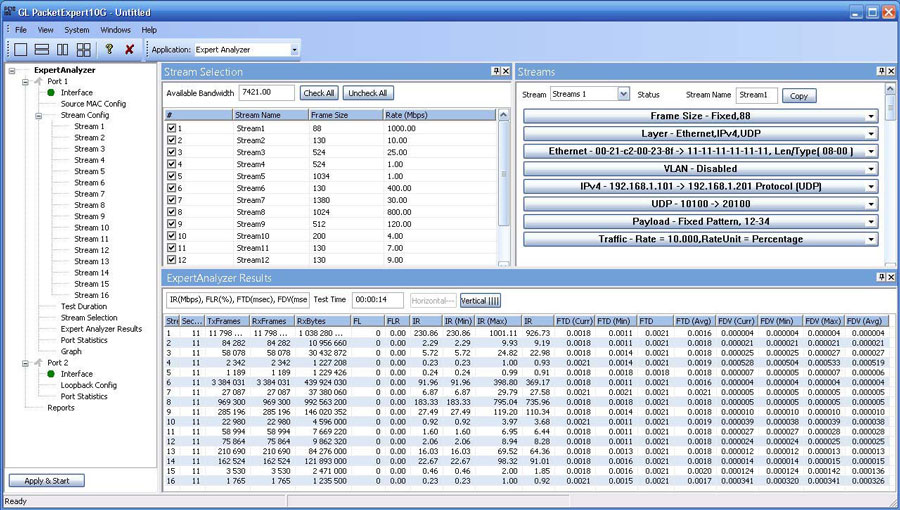 ExpertTCP™ is an optional application with GL's PacketExpert™ 10G, a dual port tester for 10 Gbps/1 Gbps Ethernet/IP Networks. It supports RFC 6349 based TCP Throughput test methodology.
GL's ExpertTCP™ performs bi-directional TCP throughput measurements in combination with another unit at the remote location (other end of the network), that acts as the TCP server. ExpertTCP™ supports both Upstream (Client → Server) and Downstream (Server → Client) direction testing.
ExpertTCP™ supports the TCP throughput testing as per RFC 6349 specification, conducted in 3 steps: Please Note: The 'Pxx' in the Item No. refers to the hardware platform on which the software will be running. Therefore, 'Pxx' can either be PXE (1G) or PXG (10G) or PXN (10GX) depending upon the hardware. 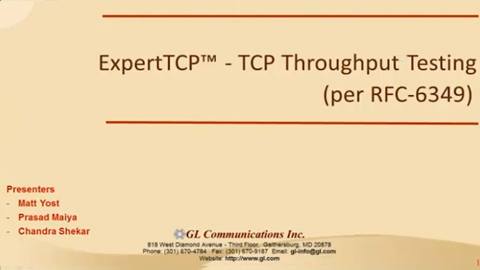