Multi Stream UDP/TCP Traffic Generator and Analyzer is a hardware-based Ethernet tester capable of generating multi-stream Ethernet traffic of varying packet length and also analyze the loopback traffic. It has the capability to Generate and Analyze up to 16 UDP streams of traffic of various packet lengths. This tool finds itself especially useful for end-to-end testing of 1 Gbps and 10 Gbps WAN (Wide Area Network) links. 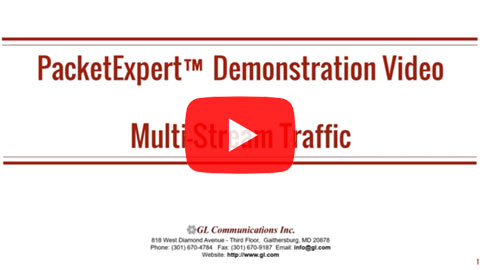 As depicted in the network diagram above, multiple streams are generated as per the user defined configurations - MAC/VLAN/IP/UDP header, the rate and the frame size. Based on the Frame size, and Rate configured different classes of traffic (voice, video, data, etc) can be prioritized.

The loopback ports on PacketExpert™ offers Smart Loopback functionality on both 10G/1G to loopback the incoming traffic back to the source in the network. Loopback option helps in easy test setup, especially in end-to-end testing, when the other end is in a remote place. In such cases, one PacketExpert™ can be put in constant Loopback at the remote end, and tests can be controlled at the local end.

Other important functionalities included on PacketExpert™ platforms are as follows:

Each Stream can be configured with various attributes like the Frame Size(s), Header Parameters (including VLAN Tag Information), IP and UDP layer parameters, Payload with fixed patterns, and Traffic rate. 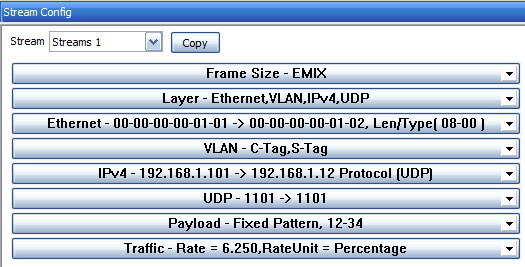 The VLAN C-Tag TCI frame format includes a 3-bit field used to Carry Priority Information (PCP), which refers to the Class of Service and maps to the frame priority level. The field values can be used to prioritize different classes of traffic (voice, video, data, etc).

Payload Configurations
2 byte Hex payload for the test packet can be configured, which will be repeated for the entire frame payload. 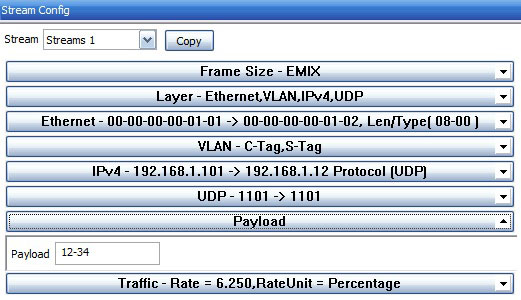 Traffic Configurations
This option allows to specify the rate at which frames have to be generated.  Various units used for configuring the rate are % - Bandwidth in Percentage of the Link Speed, Kbps – Kilobits/Sec, Mbps – Megabits/Sec, Gbps – Gigabits/Sec, Bps – Bytes/Sec, KBps - Kilobytes/Sec, MBps – Megabytes/Sec, and GBps – Gigabytes/Sec. 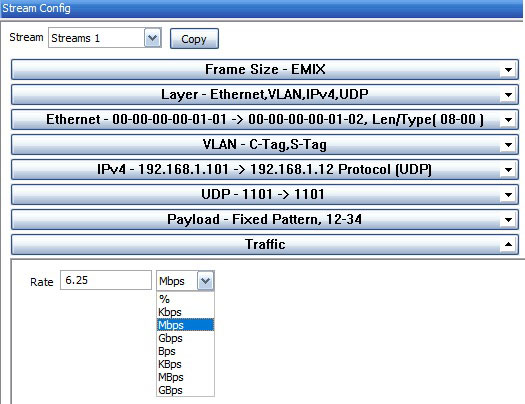 Test Duration
This option allows to set the test duration to run continuously, or limit the test by specifying the time duration in Secs/Mins/Hours.

Stream selection provides an option to select any configured stream to run the test (or) select all the streams. Up to 12 streams are supported on 1G hardware unit and 16 streams are supported on 10G/1G ports on 10G hardware units. To select all the streams, each stream bandwidth should be configured such that the Total bandwidth is limited to ≤1000 Mbps (for 1G unit) / ≤10000 Mbps (for 10G unit). The configured Frame Size and the Rate (Mbps) for the stream is also displayed for each stream. The test is performed on all the selected streams simultaneously within the specified time duration.

The multi streams generated at port#1 is sent to the Loopback port (either the port#2 in the same hardware unit or the loopback port on another remote unit) through the network. The Loopback port sends the traffic back to the port#1 again through the network. This way, the multi-stream traffic traverses the network twice (in the upstream and downstream directions), and is subjected to network impairments like Latency, Packet Loss, Jitter, Packet reordering, Packet Duplication etc. in both directions. The received traffic on port#1 is analyzed and the IP metrics are reported.

Multi-stream traffic Generator and Analyzer can be configured to generate multiple background traffic streams, which stress the network and generate highly precise (hardware generated) single VoIP stream (foreground stream) to be sent along with the background streams. This test scenario can be used to verify the QoS prioritization in the network.

Stress test DUT/Networks by generating up to 16 user defined streams at full wirespeed (1Gbps or 10 Gbps) using Multi-Stream Traffic Generator, pass the traffic through the test network towards the loopback port (remote port or local port), do wirespeed loopback to send back the traffic towards the generator port, do analysis of the received traffic at wirespeed, measure and report the IP metrics. This will measure the Round trip metrics i.e. combined performance of both Upstream and Downstream directions.