The High-speed 10 Gbps links are widely found in the local area, the metropolitan area, and the wide area networks, as it provides a cost-effective and less complex Ethernet solution to aggregate and manage data between diffrent networks. The 10 Gbps Ethernet offers data speeds up to 10 billion bits per second, generally over single mode or multimode fiber optic lines.  It is also referred to as 10 GE, 10 GigE, or 10 GbE.  10 Gbps is compatible with existing Ethernet protocols and can be easily integrated into existing networks.

Testing the voice, video, and data performance over the high-speed 10 Gbps links is extremely challenging and requires specialized test tools. GL test tools for high speed networks allows you to monitor, test, and troubleshoot performance issues. These test tools are outlined below - 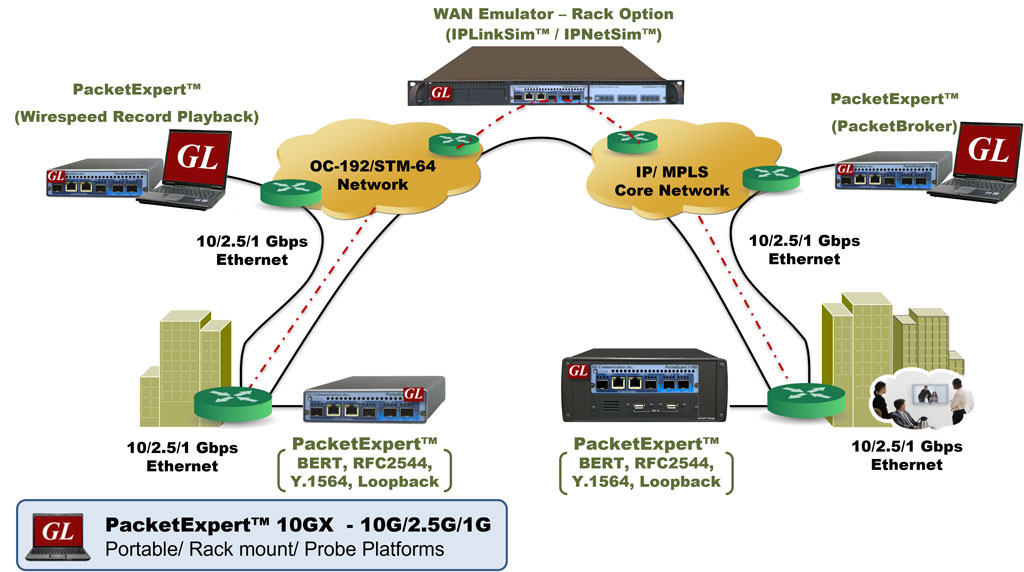 Varieties of testing on 10 Gbps networks can be performed with a single tool - PacketExpert™ 10G. Optional functionalities (WAN Link Emulation, Y.1564 Testing, Record-Playback, PacketBroker™) can be easily added to the basic application to meet all the testing requirements on a high-speed Ethernet network.

Both BERT and Loopback support Stacked VLAN and Stacked MPLS.  BERT can be configured to send/receive streams with Stacked VLAN/Stacked MPLS frames.  In addition, the PacketExpert™ 10G allows sending traffic of specific frame length and rate.

PacketExpert™ 10G supports ExpertSAM™  intended for multiservice testing to measure the maximum performance of the device or the network under test.  ExpertSAM™ is a set of procedures that test the ability of Ethernet-based services to carry a variety of traffic (voice, data, and video) at defined performance levels. In particular, it is aimed at addressing limitations of legacy RFC 2544 test procedures, especially for Service Level Agreements (SLA). It is the standard for turning up and troubleshooting mobile backhaul and business Ethernet services. Carrier Ethernet testing can be achieved by using GL's ExpertSAM™ application that supports Y.1564 based testing.

PacketExpert™10G supports Smart Loopback and automatically swaps the MAC,IP and UDP address/port and loops back incoming frames at full wirespeed of 10 Gbps. Loopback is useful in many testing situations, where there is a need for a remote device looping back the test traffic.

PacketExpert™ 10G supports capture of packets at wirespeed and also storing of the captured packets in popular file formats (pcap, ngpcap) for later analysis. The two 10 Gbps ports can act as a high performance network tap, capturing packets at wirespeed from both directions, at the same time acting as a transparent link between two end nodes.

PacketBroker™ also acts as a network tap and captures wirespeed traffic in both directions. But, in this case, instead of recording the captured packets to a file, it sends the captured traffic on the output ports for real time analysis by packet analysis tools like Wireshark™, PacketScan™ etc. It also supports wirespeed filtering to capture only traffic of interest. And also allows certain packet modifications to insert useful information such as timestamp into the packet before sending out.

IPNetSim™ supports user defined streams to classify the traffic into up to 4 streams, and applying separate impairments for each stream independently, thus emulating multiple WAN links within a single device. It also supports bi-directional full wirespeed emulation i.e. approximately 30 million packets/sec in each direction aggregating to a total 60 million packets/sec. 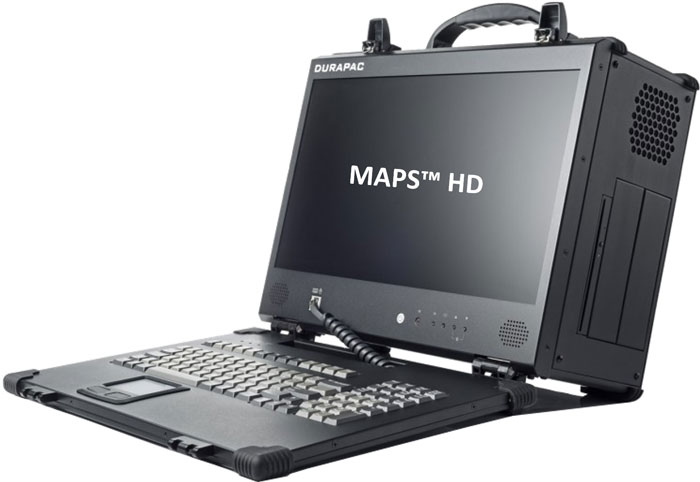 MAPS™ (Message Automation and Protocol Simulation) HD is an advanced bulk call generator used to simulate high volume calls with traffic at 1 Gbps to 10 Gbps. It is available as special purpose rackmount network appliance that is capable of high call intensity (hundreds of calls/sec) and high volume of sustained calls (tens of thousands of simultaneous calls/platform). The network appliance performs signaling and traffic generation for a vast array of communication protocols covering IP and Wireless networks.

MAPS™ HD network appliance is designed to easily achieve up to 20,000 endpoints per appliance (5000 per port). Using a stack of multiple servers, a larger test system with 100K-200K calls (all controlled from a single Master Controller) is achievable for enterprise to carrier grade testing.

GL’s also offers PacketScan™ HD, a 2U rack mounted Network Monitoring Appliance which supports simultaneous capture and processing of up to 5000 Calls with duplex traffic at 1 Gbps to 10 Gbps.

PacketScan™ HD supports simultaneous capture and processing of up to 5000 Calls with duplex traffic at 1 Gbps to 10 Gbps. Almost all VoIP and Wireless protocols over IP transport layer, as listed below, can be captured and decoded for troubleshooting network problems.