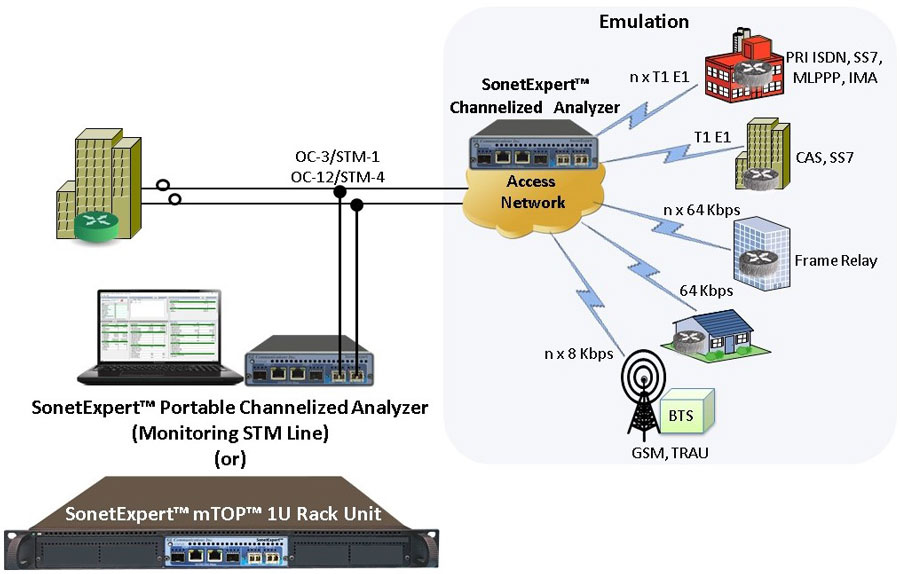 GL's SonetExpert™ hardware platform (USB Unit) is capable of OC-3/STM-1 and OC-12/STM-4 wirespeed processing on two optical ports (Port 3 and Port 4) for channelized data carrying many independent unframed/framed T1 and E1 streams. USB 3.0 interface is used to connect with a Notebook PC for portability. The hardware is FPGA based making it easy to upgrade in the field for application versatility. A unique feature of the unit is the capability to capture, transmit and process at wirespeed to/from applications on all interfaces. Also, can save the captured traffic to the hard disk and playback. 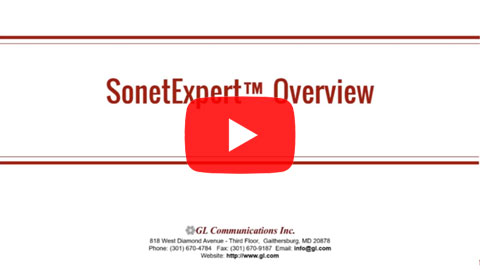 SonetExpert™ Channelized Analyzer comprises of hardware and software receiving and transmitting data using SONET and SDH networks and communicating with the GL Soft T1/E1 Analyzer application. Provides an essentially the same feature rich functionality as GL hardware based T1/E1 Analyzers with the difference that T1/E1 frames are multiplexed into SONET/SDH frames and transmitted over optical lines.

With the additional licenses SEU110 and SEU120, SonetExpert™ can be used to perform Ethernet/IP testing along with SONET/SDH testing. 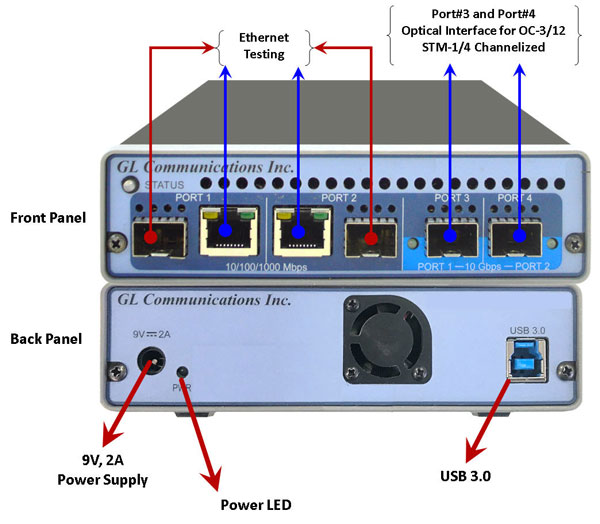 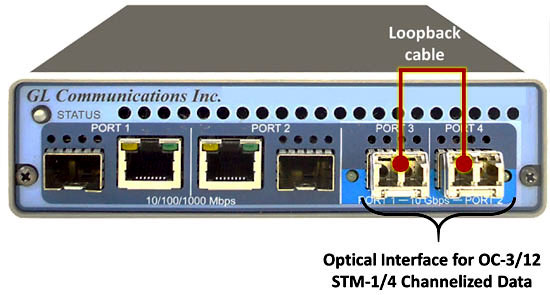 SonetExpert™ contains 4 ports, out of which two ports (Port 3 and Port 4) are designated for SONET/SDH channelized data carrying many independent unframed/framed T1 or E1 streams.

Connecting the optical SFPs to the fiber optic ports, the 2 ports (Port 3, Port 4) on the unit are available for OC-3/12 STM-1/4 channelized testing. 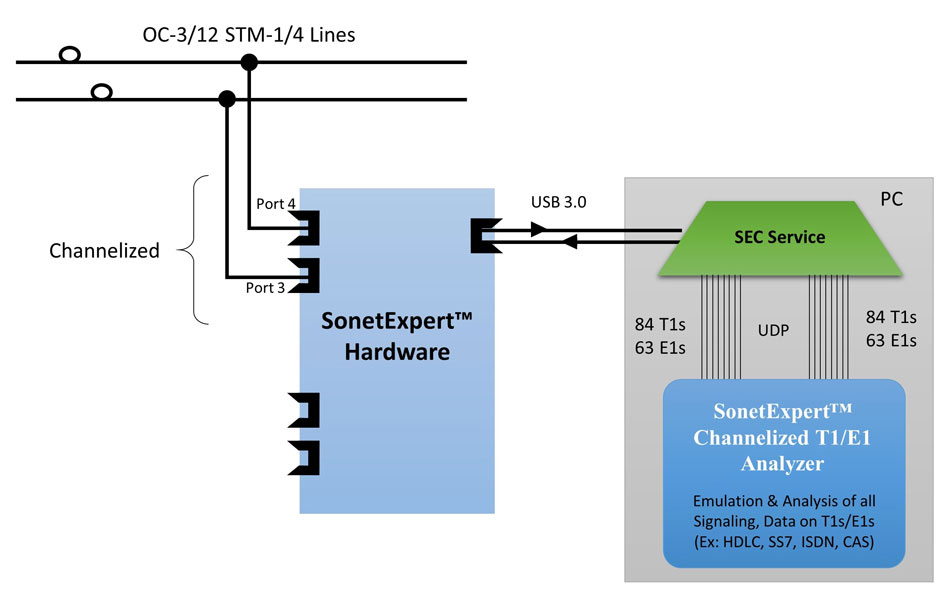 The picture below shows GUI based SonetExpert™ eChannelized Analyzer T1 E1 Service Monitor, which provides users with the following functionality: 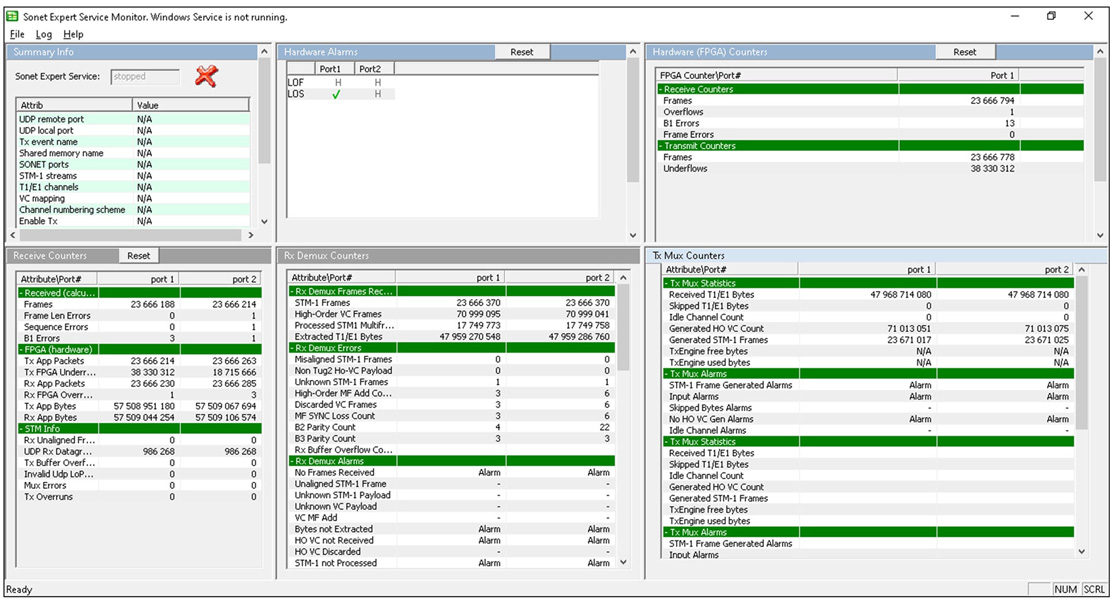 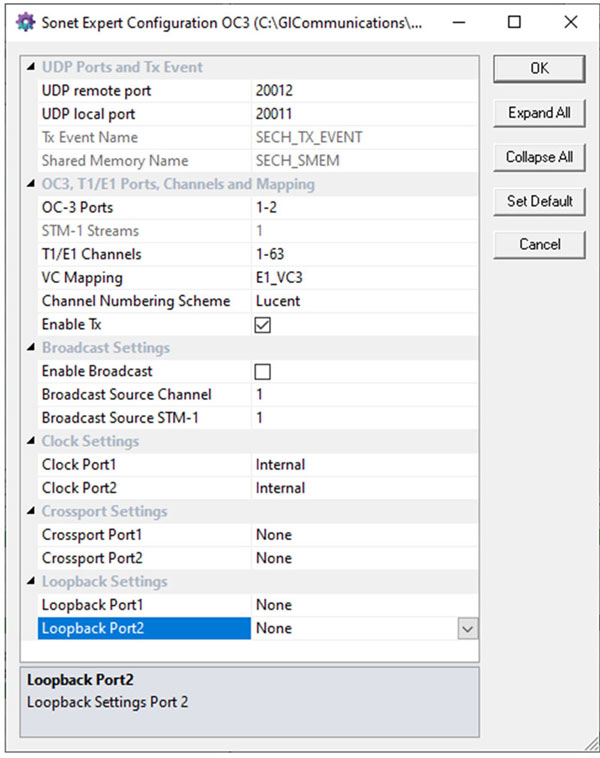 SONET is the North American standard (termed OC-N) defined in Telcordia GR-253-CORE and ANSI T1.105. STS-1 (Synchronous Transport Signal Level -1) is the basic level of electrically framed signal format in SONET. Higher-level signals are integer multiples of STS-1, creating the family of STS-N signals, for N = 1, 3, 12, 48, 192 & 768.  The optical counterpart for each STS-N signal is designated as OC-N (Optical Carrier level-N).

SDH is the Asian and European standard (termed STM-N) defined in ITU G.707 and G.708 standard. An STM-N (Synchronous Transport Module Level-N) are the frame structures used in the SDH.

The following table details bit rates of SONET and SDH.

This configuration tells which mapping option should be used when multiplexing the T1/E1 channels from STM-1/OC-3. SONET/STS-3/OC-3 maps to 84 T1 Ports. SDH/STM-1 maps to 63 E1 Ports. On the Rx path, the mapping of the received frames will be detected automatically, this configuration has effect only on the Tx path.

Two mapping schemes are supported for both T1 and E1.

The below diagram shows various T1/E1 to OC-12 mapping possibilities in SONET. The paths colored in green color are supported on GL’s SonetExpert™ hardware.

Almost all the basic applications and optional applications supported by T1 E1 analyzers are also supported by SonetExpert™ Channelized Analyzer. For example, capturing and transmitting an entire OC-3 / STM-1, and OC-12 / STM-4 signals simultaneously, or performing ISDN, or SS7 analysis, can be performed using the software accompanying the SonetExpert™ Channelized Analyzer.

Some of the applications currently supported are discussed below -

The protocol analysis can be performed on the packets captured non-intrusively by connecting the channelized Rx Ports of SonetExpert™ to a Fiber Optic tap - as shown below. The SonetExpert™ is capable of selectively identifying and forwarding the T1, or E1 signals from OC-3/12  STM-1/4 signal streams to GL’s wide variety of protocol analysis modules such as SS7, ISDN, CAS, and more. 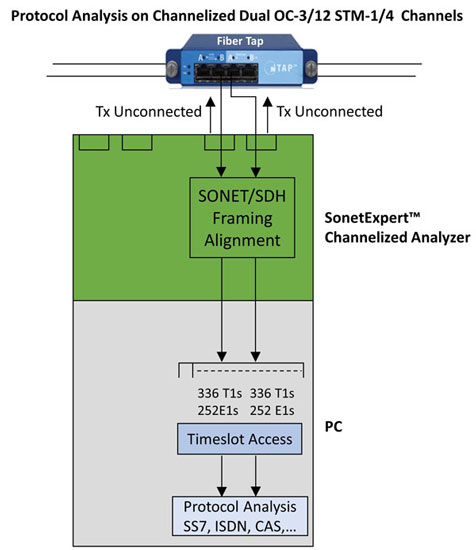 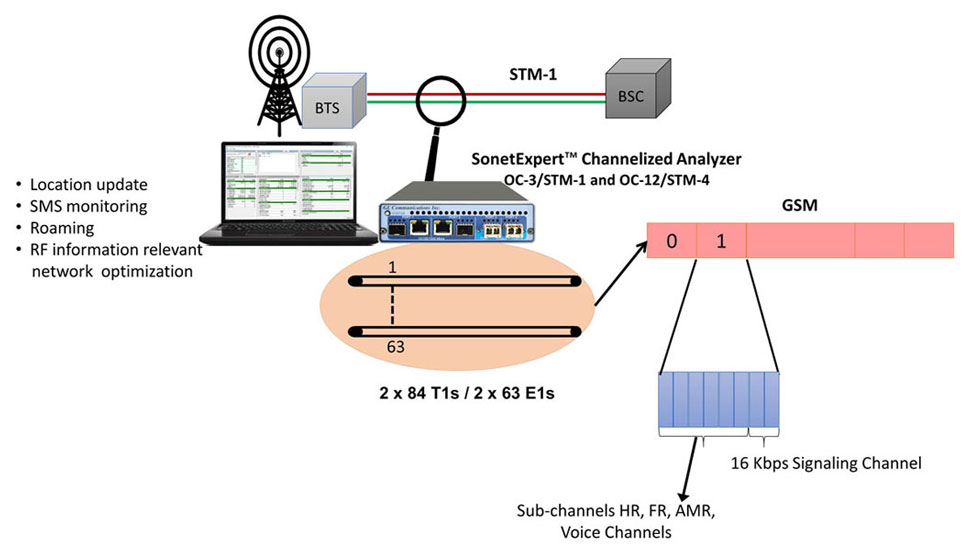 Application #3: ATM to SDH in a 3G GSM Network

Application #5: Monitoring and Analysis of TDM and IP Network 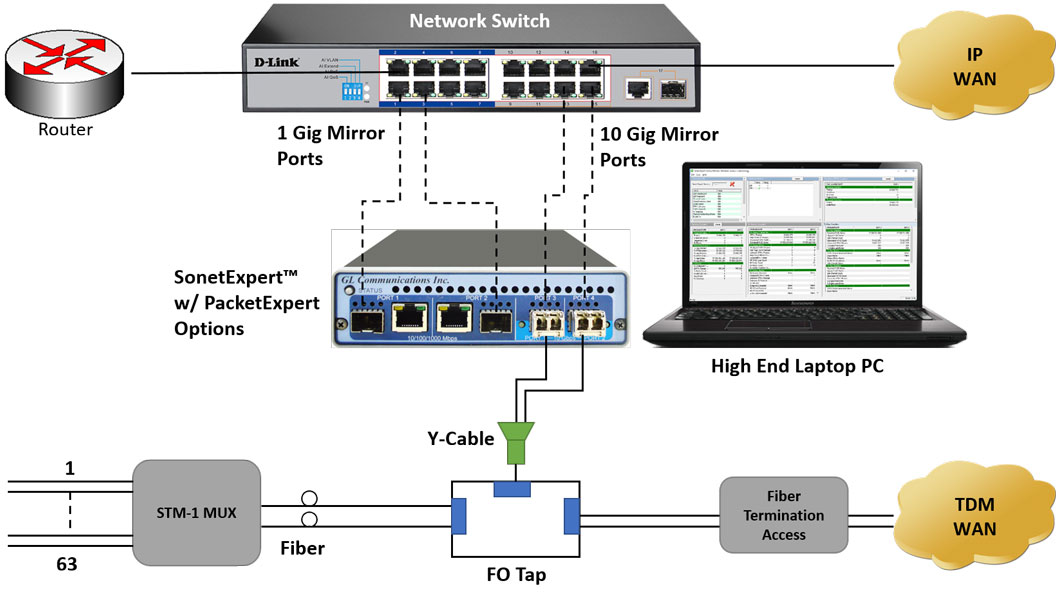