MAPS™ HD RTP (PKS109) is an advanced bulk call generator used to simulate high volume calls with traffic. It is available as special purpose rackmount network appliance with 4x1GigE NIC. MAPS™ HD network appliance is designed to easily achieve up to 20,000 endpoints per appliance (5000 per port). Using a stack of multiple servers, a larger test system with 100K-200K calls (all controlled from a single Master Controller) is achievable for enterprise to carrier grade testing.

GL's STM-1 Mux is a cost-effective, compact (only 1U high), SDH (Synchronous Digital Hierarchy) multiplexer that is designed for applications in metro and access networks for efficient transport of traditional TDM and emerging data traffic.

GL's tProbe™ is an enhanced version of our popular USB based T1 E1 VF Analyzer / Emulator. This hardware incorporates all the features of the previous analyzer such as portability, USB interface, remote accessibility, scripting, and a vast collection of optional applications. 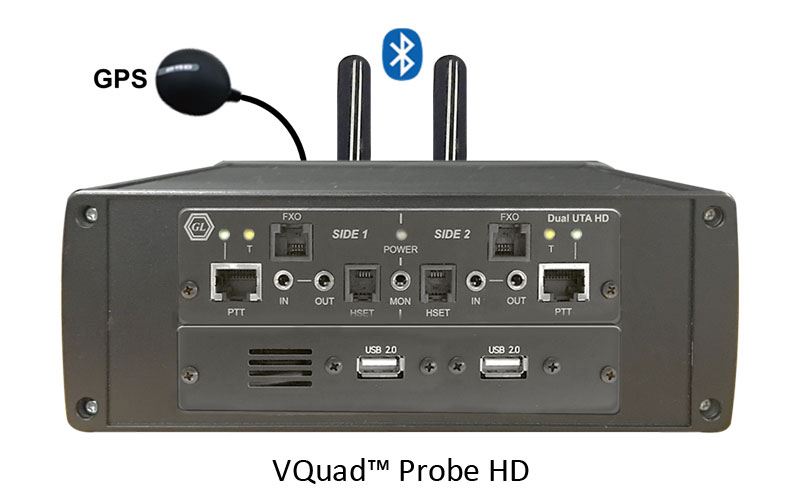 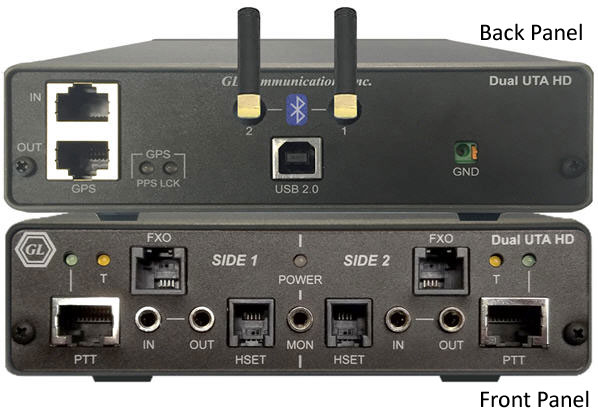 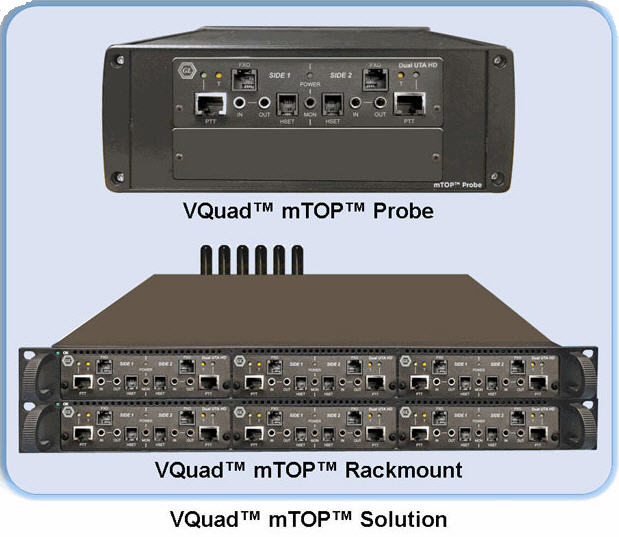 VQuad™ mTOP™ Rackmount is a high-density form factor solution, which provides benchmarking smartphones and handset tests with a combination of Drive Tests, Walk Tests, and In-Lab Tests. mTOP™ is a 1U/2U rack unit which can house any combination of multiple USB test devices. Two-stacked 1U mTOP™ test instrument greatly increases the scalability accommodating up to 6 Dual UTA HD units, thus supporting up to 12 telephony devices. VQuad™ mTOP™ rackmount is economical as it reduces the licensing costs per device.

In addition, GL launches mTOP™ Probe variant, which is an all-in-one self-contained test instrument. The latest VQuad™ mTOP™ Probe includes Dual UTA HD device combined with the PC in one single portable box. The comprehensive mTOP™ Probe hardware unit is designed for easier portability and convenient for field testing as it includes necessary PC interfaces along with Windows® 10 64-bit operating system and remote accessibility via scripting and remote desktop. There are no moving parts with the unit, so reliability and longevity are integral.

VQuad™ 24-port HD FXO solution is an all-in-one 2U rack supporting both Wide Band (WB) and Narrow Band (NB) Audio. The 2U VQuad™ HD FXO system incorporates two embedded SBCs (Single Board Computer), each running latest VQuad™ software, along with 12 Dual UTA HD units supporting a total 24 FXO Analog ports. All 24 FXO ports are independent and can be fully automated or remote controlled for a fully autonomous test solution. Access to the 24 Analog ports is via an Amphenol connector on the back of the system which can be broken out to 24 RJ11 connections. Each embedded SBC includes two Gigabit Ethernet connections, two USB connections, and a VGA monitor connection. LED lights on the front of the 2U Rack display status of each SBC along with each Dual UTA HD.

The LightSpeed1000™ is our new dual OC3 / 12 STM1 /4 PCI-Express card for protocol analysis and emulation of ATM, POS, RAW, and Ethernet traffic. The card also sports 2 GigaBytes of DDR2 RAM, a GigE, and a USB 2.0 interface making this card one of the most versatile and powerful cards in GL’s repertoire. 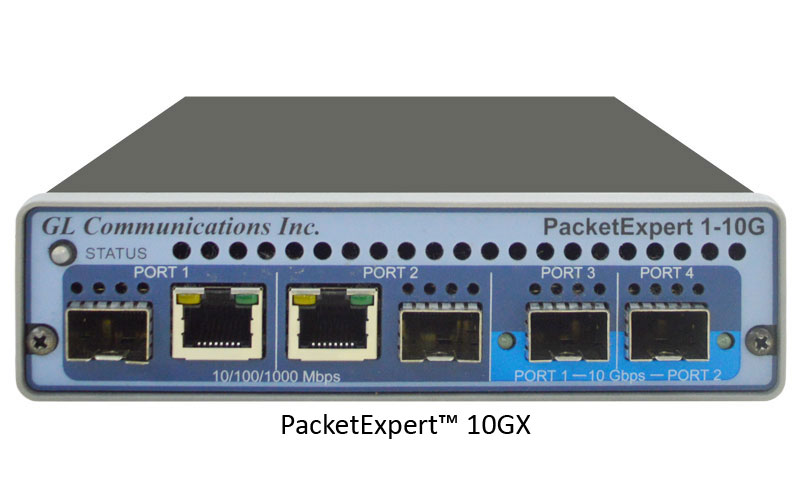 SonetExpert™ Channelized Analyzer comprises of hardware and software receiving and transmitting data using SONET and SDH networks and communicating with the GL Soft T1/E1 Analyzer application. Provides an essentially the same feature rich functionality as GL hardware based T1/E1 Analyzers with the difference that T1/E1 frames are multiplexed into SONET/SDH frames and transmitted over optical lines.

SonetExpert™ Unchannelized Analyzer is capable of SONET/SDH testing over OC-3/STM-1, OC-12/STM-4, OC-48/STM-16 and OC-192/STM-64 transports. It is based on the PacketExpert™/SonetExpert™ hardware platform. SonetExpert™ is a versatile hardware platform that supports both Ethernet (up to 10G) and SONET/SDH (up to OC-192/STM-64) testing, two ports support SONET/SDH testing. Multiple hardware units can be connected to a single PC to increase test port density. The software provides a web interface, and is accessed through any browser running on any device like PC, Laptop, tablet etc. In addition to Raw SONET/SDH, it also supports Packet Over SONET/SDH (PoS) and ATM over SONET/SDH. 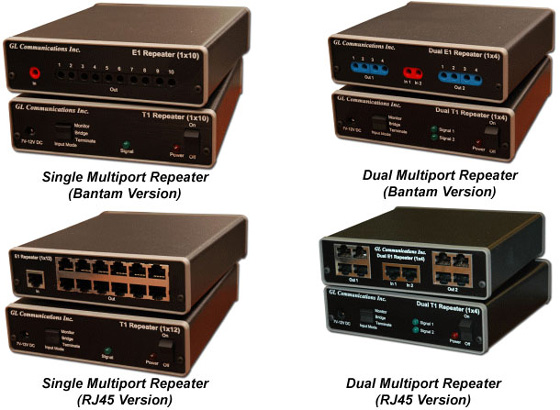 The T1 (or E1) Multiport Repeaters generate multiple identical T1 (or E1) outputs for each T1 (or E1) input. The repeaters are ideal for multicast (broadcast) applications and in lab environments for load testing and signal duplication purposes.

Multiport Optical Tap Repeater hardware test platform provides multiple identical outputs for optical and electrical signals at OC-3 / STM-1, OC-12 / STM-4, OC-48 / STM-16, 1 GigE, 2.5 GigE and 10 GigE rates. The need for optical taps that cut the optical power by 30% or 50% are not needed, since the signals are repeated at full power.

The GL Voice Recorder is used to manually capture the voice/data over a 2-wire Analog interface. Using the 2-wire Phone Tap adaptor, one can non-intrusively ‘tap’ into the analog 2-wire line via the RJ11 interface and capture the bi-directional voice/data. The recorded voice/data is automatically saved into a single PCM file. 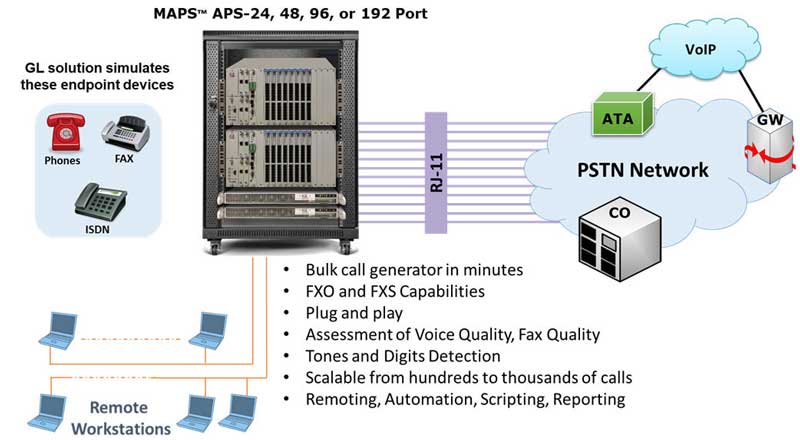