A T3 line is an ultra-high-speed signal capable of transmitting data at rates up to 44.736 Mbps. An E3 signal is situated at the third level within the Plesiochronous Digital Hierarchy (PDH) and has a bit rate of 34.368 Mbps.

The T3 E3 Analysis software compliments the hardware and supports simultaneously monitoring up to 12 x T3 E3 lines (2x mTOP™ Rack units or 6x Portable units) for all alarms, frame errors, signaling and data. If one adds the Channelized T1 Analyzer software to the system, then the T1s within the T3s can also be analyzed in software, 12 x T3 E3 lines (=12*28 T1s) constituting 336 full duplex T1s, or 672 simplex T1s monitored simultaneously using a single mTOP™ Rack unit. With additional applications, such as record-only, one can also record traffic at DS0 levels.

The channelized option in the T3 E3 Analyzer uses “software-only” approach to support direct access to all 2x28 T1s or 2x21 E1s or 2x16 E1s on a T3/E3 line per board for analysis and monitoring– all within a single PC, including differing T1/E1 framing formats, physical layer alarms, and payloads.

With Drop and Insert Functionality – 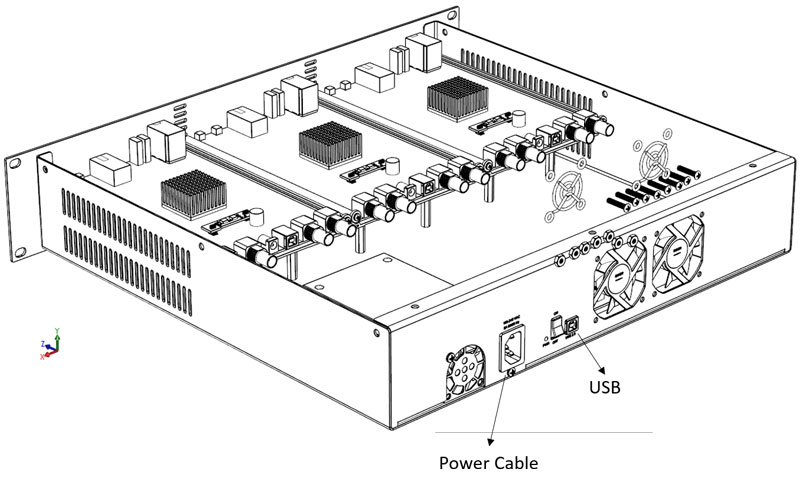 With the size of a small paperback book and weighing only 1.75 lbs, GL's newest T3 E3 Analyzer pod is one of the smallest and lightest analyzer units in the world. The small footprint makes it ideal for use in the lab as well as in the field. The unit's lightweight makes it easy to carry in the pouch of a Notebook PC making it perfect for air travel. Compatibility with any Desktop or Notebook PC allows the software to be installed on many PCs - just ship the unit to the intended location and use it on an available PC.

Multiple interfaces for analysis (T3/E3) and control (USB, Ethernet) makes it ideal for a wide array of testing scenarios:

Almost all of GL’s T1 E1 Testers can be accommodated into rack-based units. A customized 2U mTOP™ rack tProbe™ T1 E1 / Datacom-Analog units, to serve the purpose of handling multiple communications lines and test complex functionalities.


* Specifications subject to change without notice.

Physical Layer Analysis is used to monitor T3/E3 and T1E1 line alarms. The analyzer helps to track the time at which alarms (Sync Loss, Carrier Loss, Remote, Distance MF, AIS) occurrs and periodically send these information to either centralized database such as Oracle DB, or send traps to SNMP monitoring applications.

GL’s NetSurveryorWeb™ accesses fetches the records from the central database and facilitates the user to monitor physical layer status of T1/E1 line via simple web based clients. For more details, refer to Network Line Monitor and Test

Line Sync Loss: This alarm indication will flash when a receiver resync is in progress. If the receiver is set to auto resync in the Configuration Menu, the receiver will begin resync when an OOF (Out Of Frame) event or Loss of Carrier is detected.

Carrier Loss: Carrier loss alarm is declared when 128 ± 1 consecutive zero's are detected. Carrier loss clears when a ‘1’ is received.

Remote Alarm Detected (E1 Only): This alarm indication will flash when a remote alarm is detected. A remote alarm is defined as the reception of three consecutive bits equal to ‘1’ of timeslot 0 of non-align frames.

Alarm Indication Signal (AIS): The receiver detects an AIS pattern when it receives less than three zeroes in any string of 2048 bits.  The AIS condition is cleared when three or more zeros are detected in 2048 bits.

Loss of Signal (“LOS”) : This is the most basic of all alarms.  No signal is present.  Usually this means that the cable is broken or disconnected, or that the remote device is out of service.  No other alarms are meaningful when LOS is present.  In the T1/E1 Analyzer, this alarm is referred to as “Carrier Loss”.
In the software Rx Framers, an all-0 signal is interpreted as Loss of Signal.

Loss of Frame Alignment (“LOFA”) : LOFA is also known as “Out-of-Frame” (“OOF”) or “Sync Loss”, a signal is present but the Rx Framer is unable to synchronize with the incoming multiframes.  This usually means that either the framing strategies are incompatible (E1/T1 mismatch, DE4/ESF mismatch, etc.), or the signal is so poor that frame sync cannot be reliably established.  It may also mean that the receiving equipment is expecting CRC but the sending equipment is not transmitting CRC.  In the T1/E1 Analyzer, this alarm is referred to as “Sync Loss”.

Alarm Indication Signal (“AIS”) : In the T1 world, this is referred to as “Blue Alarm”.  In the E1 world, it is referred to as “AIS”.  The AIS/Blue Alarm signal is an unframed all-1s bit pattern.  Note that a framer receiving a blue alarm will lose frame sync, and will raise a red alarm if the condition persists for more than 2.5 seconds, since the basic frame synchronization signal contains zeros.

Idle : This alarm becomes active upon reception of the T3 Idle signal. Idle alarm indicates that the line has not been provisioned for service and stays without triggering network alarms.

Remote Alarm Indication (“RAI”) : In the T1 world, this is referred to as “Yellow Alarm”. In the E1 world, it is known as “Remote Alarm Indication” or “RAI”.  A device in red alarm at its receiver must transmit yellow alarm/RAI back to the sending device, alerting it that the receiving device cannot synchronize with the signal being sent.  We got this one right on our T1/E1 Analyzer alarm dialogs. 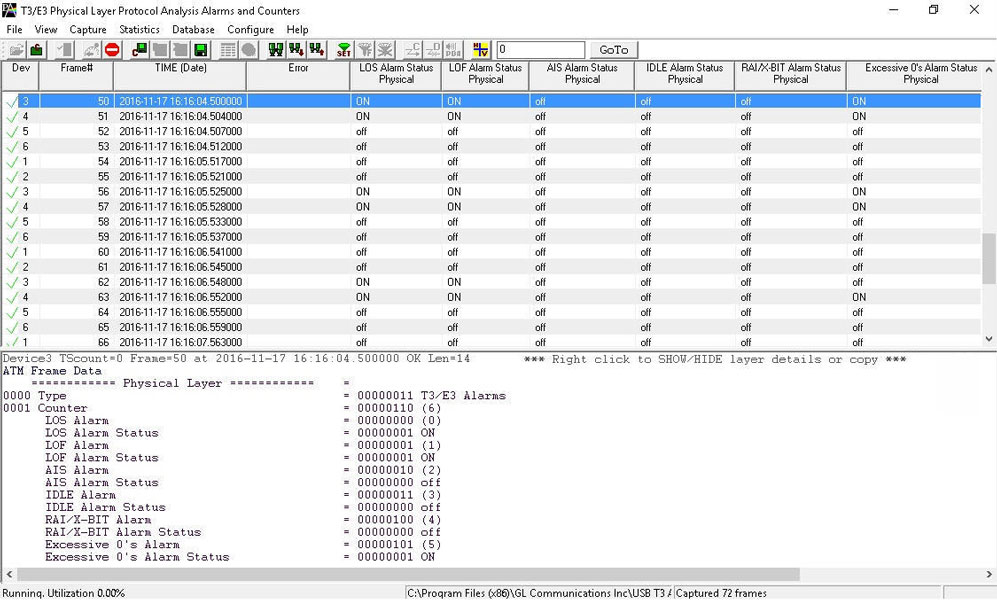 The summary view displays which alarm has occurred along with the particular timestamp and error counts. It also indicates the Frequency and Level for the counters.

SNMP traps data are monitored at NOC using any SNMP Monitoring Application as shown below.

A list of all the basic applications and other optional applications (requiring additional licenses) are listed here.

For more details refer to https://www.gl.com/t3-subrate-scrambling.html 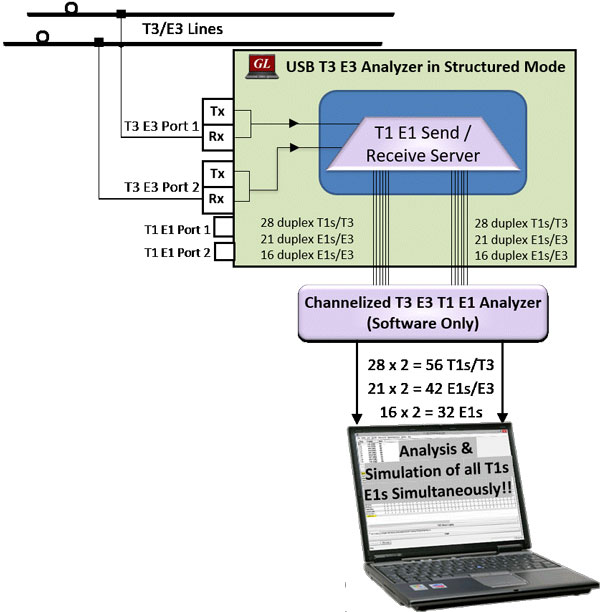 The Channelized T3 E3 to T1 E1 solution, comprises of two modules, namely, the High-Speed T3/E3, and Low-Speed T1/E1 modules. These two modules are actually two separate processes running on the same computer. The High-Speed T3/E3 process is called as T1/E1 Send/Receive Server, as the name suggests it runs as a service and works with USB T3/E3 hardware. The Low-Speed T1/E1 module part is referred to as Channelized T3 E3 analyzer software.