Welcome to another June 2015 issue of GL's Newsletter. This week we discuss our Test Solutions for elements of FAA's next generation voice network called the National Airspace System (NAS) Voice System (NVS).

The Federal Aviation Administration (FAA) has identified six "transformational programs," which will provide the foundation technologies / infrastructure needed for the Next Generation Air Traffic Control System. One of the six programs addresses a new voice network called the National Airspace System (NAS) Voice System (NVS), based on standard VoIP technology with specific enhancements for air traffic control. Before the system is deployed, it is imperative that thorough testing for voice quality, performance, reliability, and functionality be conducted. GL tools for emulation, analysis, measurement, and voice quality assessment can be very useful. Some of these features are described in this newsletter.

Voice communications is a vital part of air traffic control. Air Traffic Controllers (ATC) are trained to use exact phrases when speaking to pilots and other controllers, because a single misunderstanding about altitude levels, change of direction or runway numbers could lead to incorrect maneuvers which could lead to tragic consequences. The new system must have equal or better voice intelligibility, voice quality, performance and reliability than the current voice system. Further, it must preserve the current methods and functions that controllers use to communicate with pilots. A controller keying a PTT-switch after pre-selecting a frequency for transmission, will cause a Push-to-Talk signal to be sent over a ground path towards a radio transmitter that triggers the radio to transmit on the frequency it is set to. All aircraft under the ATC's supervision in a sector of airspace tuned to that same frequency are able to hear the controller transmission.

For Air-to-Ground communication, the remote radio site's receiver detects the incoming audio (breaks Squelch) and then starts transmitting the audio over the ground path, towards the Voice Communications System (VCS).

Voice messages sent when PTT / Squelch signals are active use a disciplined voice procedure and standardized phraseology (destination flight codes, tower, and flight numbers) for clear communication. Both the PTT and Squelch signals must be preserved in the new voice communication system.

The figure below is a basic diagram of an Air Route Traffic Control Center (ARTCC). The core component of this network is the voice switching and control system or Voice Communications System (VCS) that connects Controller Worker Positions (CWPs) to radios at remote sites in sectors within the geographic coverage area of the ARTCC. In the figure below, a voice path connects a CWP to Remote Communications Air to Ground sites (RCAG) in order to provide optimum coverage of the "air highways".

The backbone communication lines can be 2-wire or 4-wire copper, T1/E1 digital trunks, microwave, and even fiber-optic cable. Primary / Secondary DSB-AM (Double Side Band Amplitude Modulation) VHF transmitters are used for the Ground-to-Air path, whereas the Air-to-Ground path consists of majority voting diversity VHF receivers (allowing the best received signal to be selected and forwarded to the controllers). 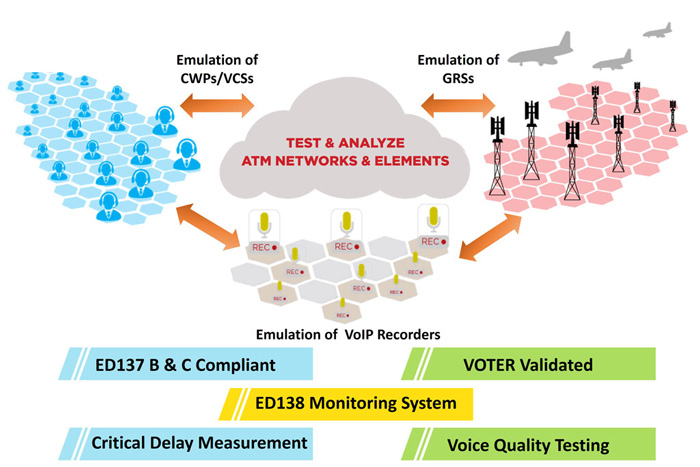 The FAA plans to replace the above Analog / TDM technology with VoIP technology as defined by EUROCAE ED-137. These documents specify how SIP is used to establish, modify, and terminate sessions within an Air Traffic Services Ground Voice Network (AGVN) with endpoint equipment. The endpoint equipment can be SIP CWPs, Next Generation VCS's and Radios or VCS/Radio Gateways allowing interworking with older legacy equipment and protocols.

The specification also defines radio signaling methodology between Next Generation VCS and RCAG equipment using a EUROCAE WG67 defined RTP Header Extension (RTP-HE). The RTP-HE can be sent both with the audio packets during an active PTT keying/ SQUELCH signal as well as with Keep-alive packets (not containing audio payload) exchanged between RCAG and VCS equipment.

The NAS Voice System will take a number of years to implement and will require testing of the VoIP signaling, audio quality, network reliability, as well as basic functionality of the network and voice systems.

Initially existing systems can be implemented using the legacy analog and digital TDM voice equipment by using a WAN network as the connection backbone, accessed using VoIP gateways. Testing the VoIP WAN connections from the radio interface to the Controller Working Position (CWP) will be essential.

GL currently has the ability to test voice quality and latency of the Analog / TDM and VoIP systems using GL's VQuad™ product by injecting and recording analog signals at the CWP, Radio and VoIP gateway interfaces. GL's VQuad™ can automatically key PTT from the CWP, then transmit and receive audio signals for Voice Quality Assessment and precise delay testing. Delay testing and verification is going to be particularly important with the transition to IP, which will introduce packetization delays as well as jitter buffer delays and other uncertainties.


Below is a list of the key features associated with the VQuad™:

Additional testing needs may include emulating many endpoints and bulk loading (calling) of the network is desired. GL's enhanced MAPS™ SIP (with ED-137 support) can emulate many endpoints without requiring analog interfaces.

Message Automation & Protocol Simulation (MAPS™) is a multi-protocol, multi-technology platform used for the emulation of a variety of communication protocols over IP, TDM, and Wireless networks. MAPS™ can be used to test signaling over legacy networks (such as CAS, SS7, ISDN, PPP and more), IP networks (such as SIP, MGCP, MEGACO, SIGTRAN, Diameter...) and also Wireless technologies including GSM, UMTS, and LTE networks.

MAPS™ SIP, as shown above, has been enhanced to support FAA (EUROCAE WG 67 ED-137) specific end points and traffic. It includes enhancements to messages in order to support call setup over FAA radio sessions and RTP Header Extension signaling exchanges that contain signals such as Push-To-Talk and Squelch. It also handles Keep-Alive packet exchanges while there is no active voice being transmitted or received to keep the SIP session maintained.

The ED-137 version of MAPS™ SIP can be used to set up voice sessions over a network, then send and record test voice signals for assessing voice quality and performance. 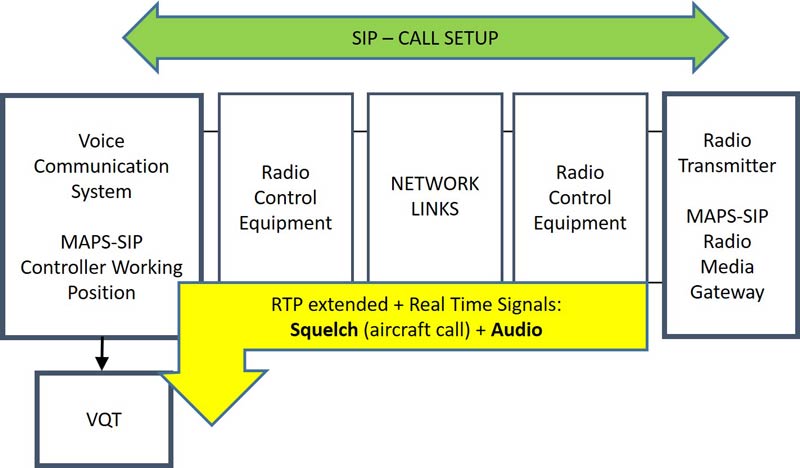 
The figure above shows a call from an aircraft sending a voice file over the radio network to an air traffic controller. When there is no voice transmission from the Aircraft, only keep-alive packets are sent from radio towards the VCS/CWP endpoint. PTT keying by a pilot triggers voice transmission towards the ground and Keep-alive packets are replaced by audio packets from radio towards the VCS/CWP. The voice traffic is received at the controller side and recorded. The file is then compared against the original and a standard ITU-based voice quality score is derived. The RTP traffic can also be converted to analog and output on a PC sound card.

To ensure safety, reliability, and performance - the transition from the legacy network to the VoIP network will take extensive end-to-end testing as well as individual interface testing among the various elements, including Gateways, Radios, Switches, and Routers.

As previously mentioned, delay through these networks (and other impairments - jitter, packet loss, etc.) is of concern; network testers will need to precisely time events. For example an Air Traffic Controller keying PTT until the RTP IP stream indicates that the PTT bit is set is a critical measurement. This measurement is possible using GL's VQuad™ as well as GL's PacketExpert™. Both products are capable of generating event driven triggers(specific packets or TTL signals that can be used for synchronizing other instrumentation. VQuad™ is capable of generating TTL triggers based on PTT activation. PacketExpert™ is capable of generating packet and TTL triggers based on real-time packet filtering/detection. 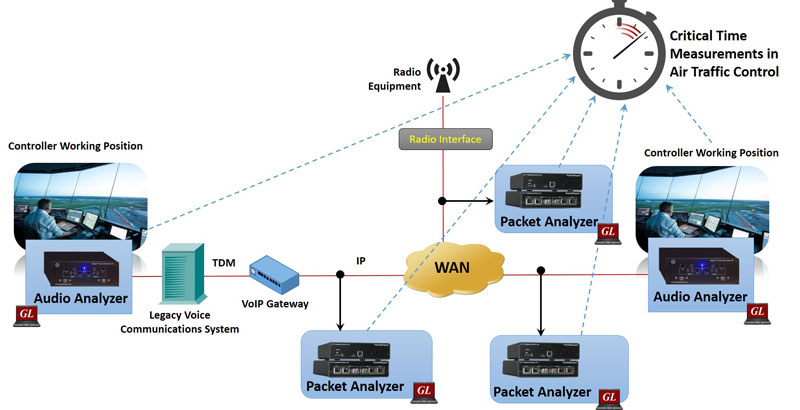 GL's PacketExpert™'s Record to File feature includes a powerful "Wirespeed filter" that allows a user to filter out unwanted traffic, and continuously capture the traffic of interest. Features of the WIRESPEED packet filter are listed below:

GL's PacketScan™ - an All-IP Network Monitoring software offers powerful features to capture and monitor live signaling and traffic over IP. It captures, segregates, monitors and collects statistics on all IP calls. Ease of viewing of Ground-to-Ground calls and Air-to-Ground sessions is possible.

As discussed earlier, GL's Testing Suites provide the necessary flexibility and enhancements to meet the challenge of ED-137. And as standards evolve, GL will track provide updates.