Welcome to August 2018 issue of GL's Newsletter providing information and insight into our all-new Ethernet Tester - PacketExpert™ 10GX, which extends testing capabilities for 10 Gbps and 1 Gbps networks. PacketExpert™ 10GX hardware unit is a more compact than its predecessor and includes multiple user-configurable TTL trigger I/O ports and combined 10Gbps/1Gbps capability. The device can run all 4 ports at 1-Gbps Electrical/Optical, including the 10 Gbps downshift to 1 Gbps. Read below for more details and comparisons. 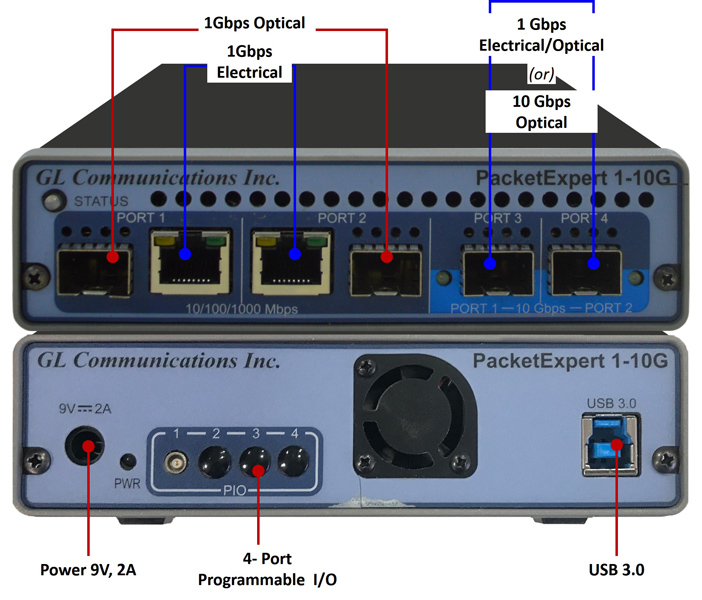 High density Gigabit Ethernet Network Switches can have 12 or 24 ports, each supporting full bidirectional 1 to 10 Gbps traffic rate, totalling to 24 Gbps or 48 Gbps rate simultaneously on all ports. Testing such multi-port switches require Ethernet testers to generate traffic at line rate (24 Gbps or 48 Gbps) and analyze the traffic returned from the switch for errors.

All 12 ports of a multi-port switch can be simultaneously tested by configuring PacketExpert™ 10GX mTOP™ (1U) to test Port Pairs as shown in the figure below. On one end, the Ethernet Tester generates multi-stream traffic at 10 Gbps line rate, and on the other end, multi-device 12-Port PacketExpert™ 10GX mTOP™ can operate in All-Port loopback to test all ports of a multi-port switch.

A 1U mTOP™ supports 3 PXNs devices. Similarly, a 2U mTOP™ supports 6 PXNs devices. All 12/24 ports can be controlled within single software. These rackmount systems can be easily deployed and securely fixed to a rack enclosure. mTOP™ systems not only provide space efficiency, but also account for easier scalability and reduced licensing cost per port.

This multi-device PacketExpert™ 10GX mTOP™ hardware incorporates all the features of a PacketExpert™ 10GX unit, along with a Single Board Computer (SBC) hosted on Windows® OS, remote accessibility via Ethernet Remote Desktop, and user-friendly GUI or CLI for test automation. Each GigE Port of the device supports auto‐negotiation and flow control.

The PacketExpert™10GX Hardware can be used as a unique Packet Analyzer or Packetizer hardware capable of generating or accepting Packets and TTL triggers based on real-time packet capture, detection, and filter as necessary. As depicted in the diagram below, this feature is useful in detecting and timing important events propagating over communication networks, specifically mission critical networks such as VoIP ED-137 ATM (Air Traffic Management) networks. 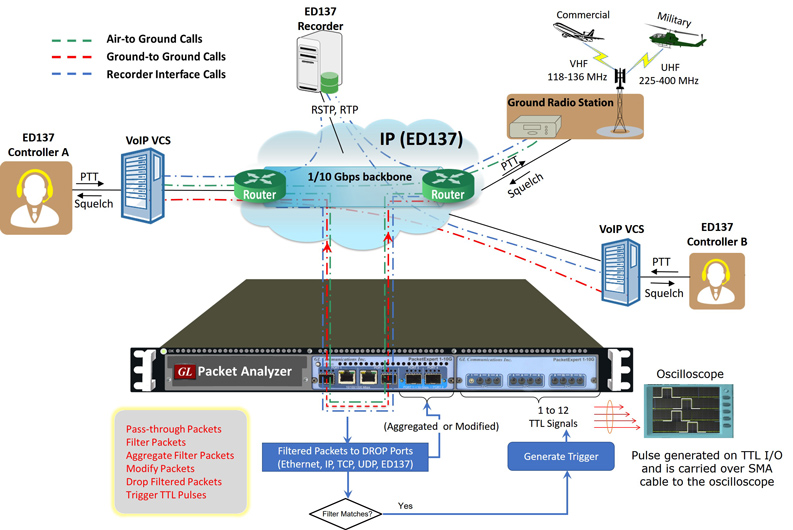 The accompanying Packet Broker application allows PacketExpert™10GX Hardware function like a transparent Ethernet tap, through which bidirectional Ethernet traffic flows through at line rate. Simultaneously, the hardware can filter certain packets of interest from both directions without disturbing the traffic. The filtered packets from both directions are aggregated and forwarded over a single output port. The optional Programmable I/O (Input/Output) ports on the hardware can generate TTL signals for each filter match.  The TTL signal output (representing the Filter match) are connected to Oscilloscope for measuring precise timing between any two events.

When 1G ports are configured as pass-through ports, the filtered packets (modified/aggregated) are sent out on 1G Output port as a single stream. 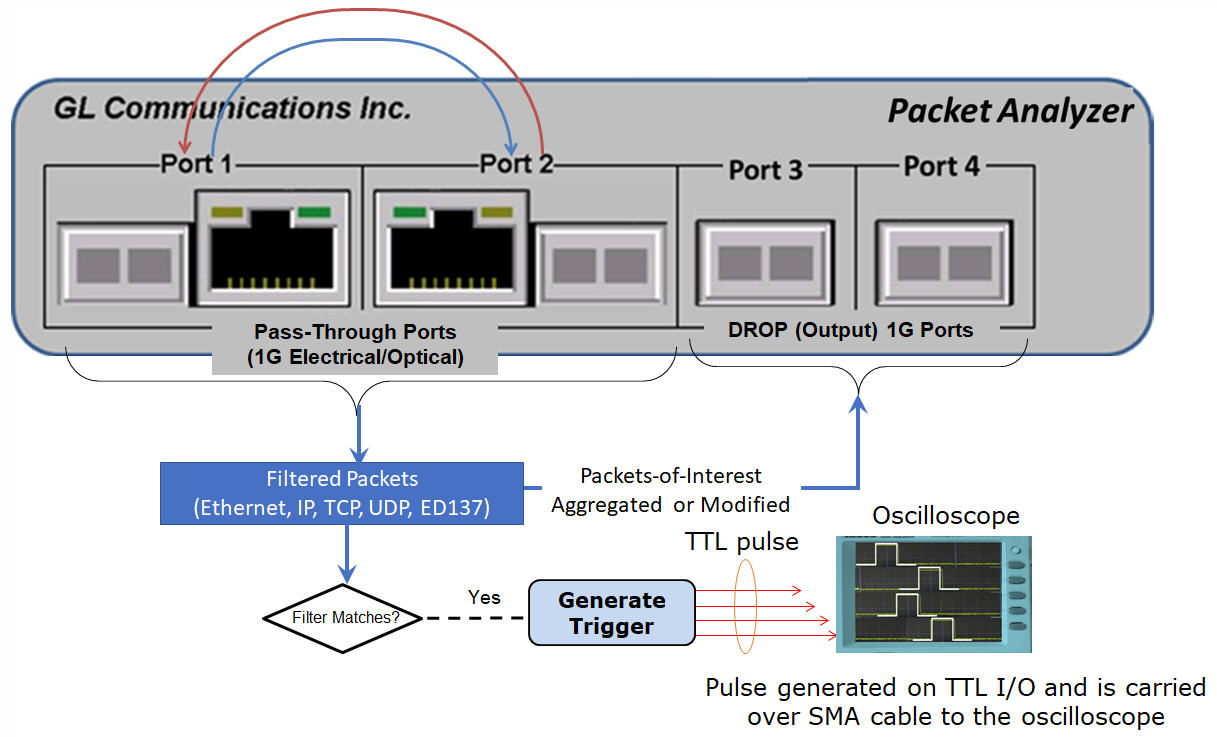 Alternatively, the filtered traffic from 10G ports (modified/aggregated) can be sent out on 1G Output port as a single stream. 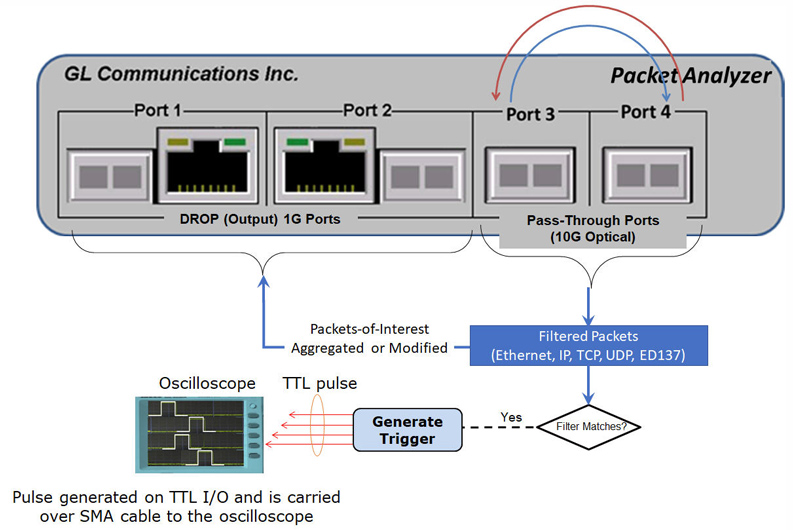 In both cases, the ‘Filter to TTL’ mapping may be set as follows:

With the new 12 TTL I/O enhancement (coming soon), the ‘Filter to TTL’ Mapping is completely user-configurable, that is up to 12 filter outputs can be configured to generate or trigger TTL pulses. The pulses so generated on TTL I/O is carried over SMA cables to the Oscilloscope for monitoring events.

The PacketExpert™10GX Hardware can work in tandem with a 4-wire device such as Audio Analyzer that supports PTT interfaces to convert analog events into corresponding packet events. The Packetizer monitors the TTL output from the Audio Analyzer on a regular interval, and for every trigger pulse received, it generates and transmits a timestamped IP packet indicating which pulse it received. This indicates a certain discrete event has occurred.

Smart Loopback and automatically swaps the MAC, IP and UDP address/port and loops back incoming frames at full wirespeed of 10 Gbps. Loopback is useful in many testing situations, where there is a need for a remote device looping back the test traffic.

ExpertSAM™ is intended for multiservice testing to measure the maximum performance of the device or the network under test.  ExpertSAM™ is a set of procedures that test the ability of Ethernet-based services to carry a variety of traffic (voice, data, and video) at defined performance levels.

PacketBroker™ acts as a network tap and captures wirespeed traffic in both directions. It also supports wirespeed filtering to capture only traffic of interest. It also allows certain packet modifications to insert useful information such as timestamp into the packet before sending out on DROP ports. Simultaneously the filtered packets can be monitored with TTL signal generation.

ExpertTCP™ test methodology is based on the RFC 6349 to measure bi-directional TCP throughput, RTT and optimal window size. Generate and Analyze up to 12 UDP streams of traffic of various packet lengths. ExpertTCP™ supports both Upstream (Client → Server) and Downstream (Server → Client) direction testing.