Channel Associated Signaling (CAS) is a method of signaling in telephone networks where each channel or timeslot carrying speech also carries with it the signaling and addressing to set up and tear down that same channel. This is commonly referred to as 'in-band' signaling as opposed to 'out-of-band' signaling, such as ISDN or SS7. Signaling bits associated with each voice channel carry 'on-hook' and 'off-hook' status and addressing information in the form of dual tone digits to direct the call to its destination.

Channel Associated Signaling (CAS) simulator is an optional application that works along with the GL's T1/E1 Analyzer Cards and Windows Client/Server software that simulates and analyzes any user-defined CAS protocols.

These probes now supports Packet Data Analyzer with recording capabilities. Packet Data Analysis (PDA) is an outstanding tool for live monitoring of signaling and traffic over TDM. Allowing users to monitor live TDM networks including capture, analysis, and reporting of every call-in detail.

It also offers NetSurveyorWeb™ Lite (PKV169) a cost effective, simple Plug & Play connection, which is an integrated and simplified web-based system that is distributed at probe level.

CAS emulation is also available with GL's Message Automation and Protocol Simulation (MAPS™). MAPS™ is a multi-protocol, multi-technology platform used for the emulation of a variety of communication protocols over IP, TDM, and Wireless networks. MAPS™ CAS can automate the testing procedure allowing the users to establish calls, and send/receive TDM traffic such as DTMF/MF digits, Tones, Voice, and Fax. In addition, GL supports various E1 MFCR2 analysis and simulationsolutions.

The supported protocol standards in CAS protocol analyzer is MFCR2 and R1.

The protocol analyzer opens with Summary, Detail and Hex Dump as default panes. Statistics and Call Detail are optional panes, which can be viewed if required.

Users can capture and analyze frames in real-time and record all or filtered traffic into a trace file. The recorded trace file can then be analyzed offline and exported to ASCII file, or printed.

The real-time analysis is used to capture data on one or multiple T1/E1 lines on the specified timeslots simultaneously during transmission. The captured data is always stored in a temporary file.

Users can specify custom values for frame length to filter frames during real-time capture. The frames can also be filtered after completion of capture based on various protocol parameters such as CAS signaling type, digits, tones, or erred frames.
Similarly, search capability helps user to search for a particular frame based on specific search criteria. 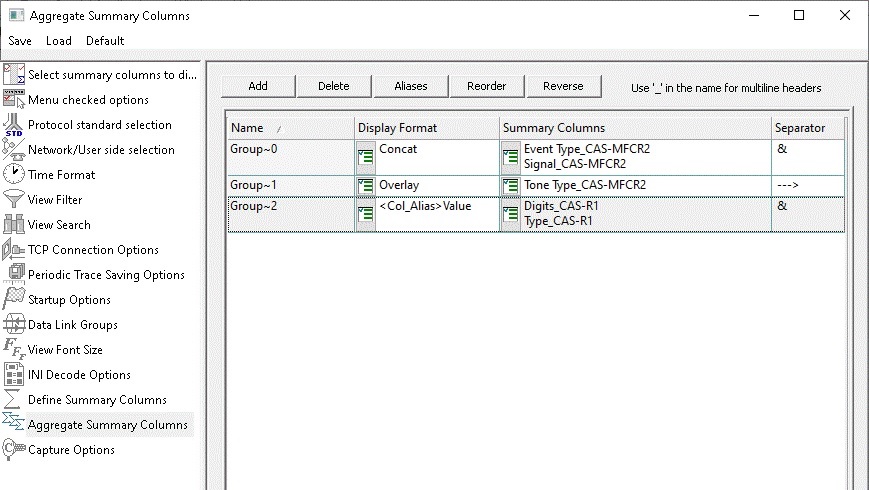 The updated results are as shown below. Here the root aggregate group~0 summary columns are displayed first and then Group~1 and Group~2 as per the assigned priority. 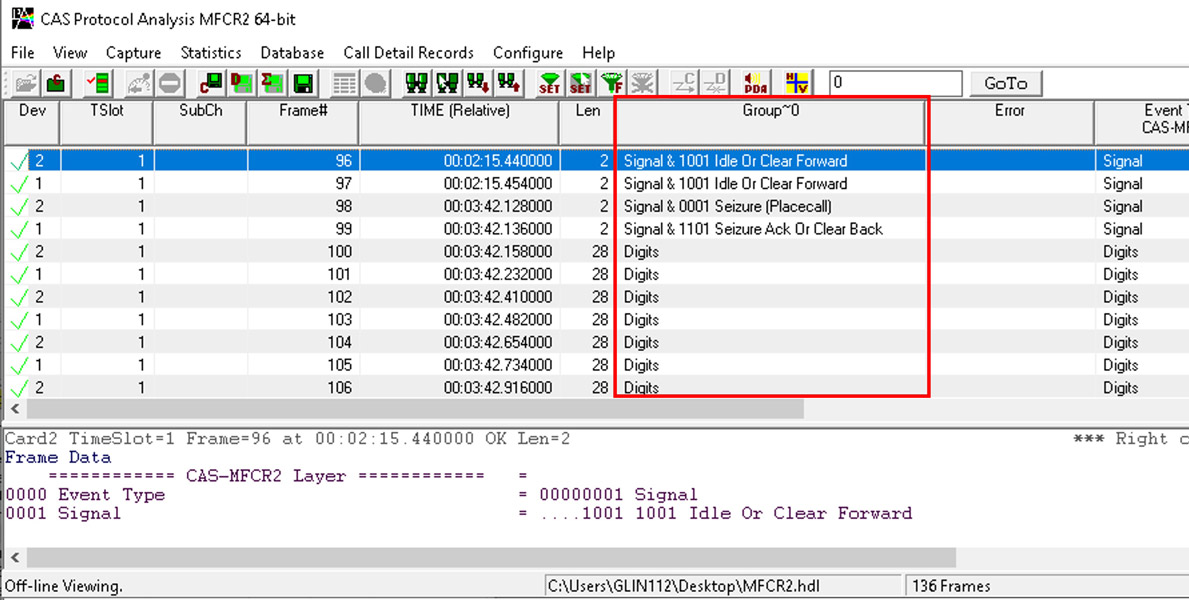 Important call specific parameters like Call ID details, the calling status whether the call is active or completed, calling number, called number, call start date and time, call duration, release cause, device number, and so on are calculated and displayed in Call Detail View. Additionally, users are provided with the option to search a particular call detail record from the captured traces.

Save / Load All Configuration Settings

Protocol Configuration window provides a consolidated interface for all the important settings required in the analyzer. This includes various options such as protocol selection, startup options, stream/interface selection, filter/search criteria and so on. All the configuration settings can be saved to a file and then loaded for future operations, or user may just revert to the default values using the default option.

Please Note1: The XX in the Item No. refers to the hardware platform, listed at the bottom of the Buyer's Guide, which the software will be running on. Therefore, XX can either be ETA or EEA (Octal/Quad Boards), PTA or PEA (tProbe Units), UTA or UEA (USB Units), HUT or HUE (Universal Cards), and HDT or HDE (HD cards) depending upon the hardware.

* Specifications and features subject to change without notice.