Characterizing and limiting these impairments is critical to the performance of the system as a whole. Rigorous methods are needed to precisely measure the delay introduced by each network element as events propagate end-to-end. Recognizing, capturing, timestamping, and correlating events at Analog, TDM and IP interfaces are necessary. Delay measurements should be conducted repeatedly to ensure that the device and network under test is performing as expected consistently over time.

GL has developed MAPS™ TM-ATM (Timing Measurements in Air Traffic Management) test suite to accurately simulate end points in ATM network and provide critical timing measurements for various types of delay occurrences in signaling and voice transmission through the network. It includes all necessary hardware and software to identify, capture, timestamp, and correlate events at Analog, TDM and IP interfaces. 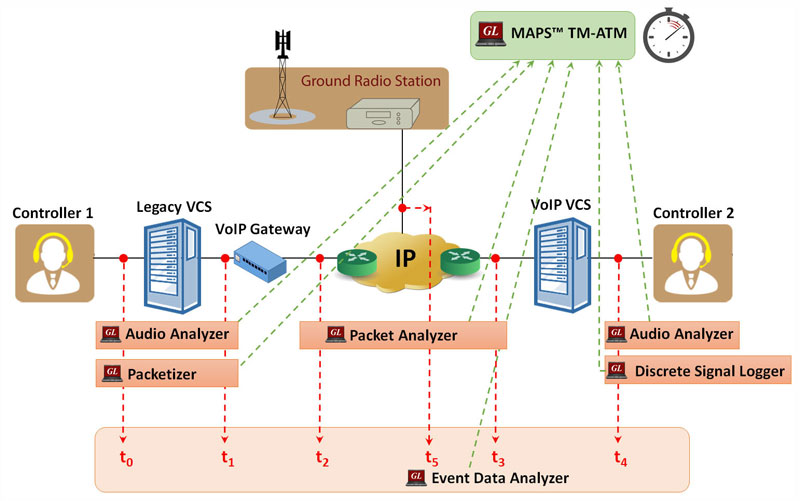 Some of the standards bodies like the Federal Aviation Administration (FAA) in the USA has published specification for NVS system defining timing requirements in detail, which details the Setup/Teardown Throughput Timing Requirements during Peak Busy Hour (PBH) and Peak Busy Minute (PBM).

As per the industry standards, the following network delay measurements are of primary interest:

To perform these timing measurements, one can setup MAPS™ TM-ATM (Timing Measurements in Air Traffic Management) tools at appropriate strategic interfaces. GL’s MAPS™ TM-ATM is a custom suite of test tools, designed to accurately measure various types of delay occurrence in signaling and voice transmission. It includes all necessary hardware and software to identify, capture, timestamp, and correlate events at Analog, TDM and IP interfaces.

MAPS™ TM-ATM (Timing Measurements in Air Traffic Management) components can be broadly categorized into two sets based on the underlying hardware: 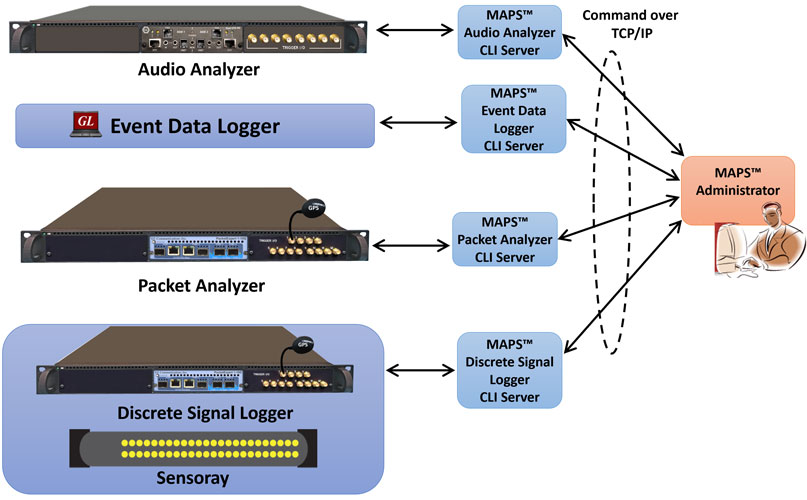 GL's MAPS™ ED-137 Radio and MAPS™ ED-137 Telephone Emulators can simulate Air-Ground calls (as per ED137_1B and ED137_1C: Radio) and Ground-Ground (as per ED137_2B: Telephone) calls. Users can generate hundreds of calls as background traffic to evaluate delay and network performance. GL's Packet Analyzer monitors the line non-intrusively and detects the packets of interest (e.g. first RTP packet with PTT bit set) based on the filters set. For every flter match, the packet analyzer generates output TTL signal pulses and post an event to Event Data Logger. so that the TTL signal (representing the Filter match) can be taken out and processed using an external device like Oscilloscope.

Audio Analyzer injects and records analog signals at CWP, Radio and VoIP gateway interfaces and generate TTL for different actions (PTT ON, PTT OFF, Send Audio, Detect Audio). When an Audio Analyzer performs a certain function, it simultaneously sends a discrete TTL pulse to the Packetizer. When the Packetizer receives this pulse, it creates and transmits a timestamped packet indicating which pulse it received. This packet is filtered out by the Packet Analyzer. Up to 16 filters can be operated simultaneously per port.

This process allows us to get both analog and digital events into the same log for delay measurement. The analog signals can be verified by connecting the TTL I/O Ports to Oscilloscope using SMA cables.

The Event Data Logger is located at a central location and receives the event packets forwarded from the various Packetizers and the Packet Analyzer systems throughout the network. It timestamps each received packet, decodes the packet to extract information, and updates both Discrete Events (from the Packetizer) and Timed Events (from Packet Analyzer) to the MAPS™ TM ATM Admin. It utilizes an onboard memory to temporarily store the received packets before being transferred to the MAPS™ Controller for analysis.