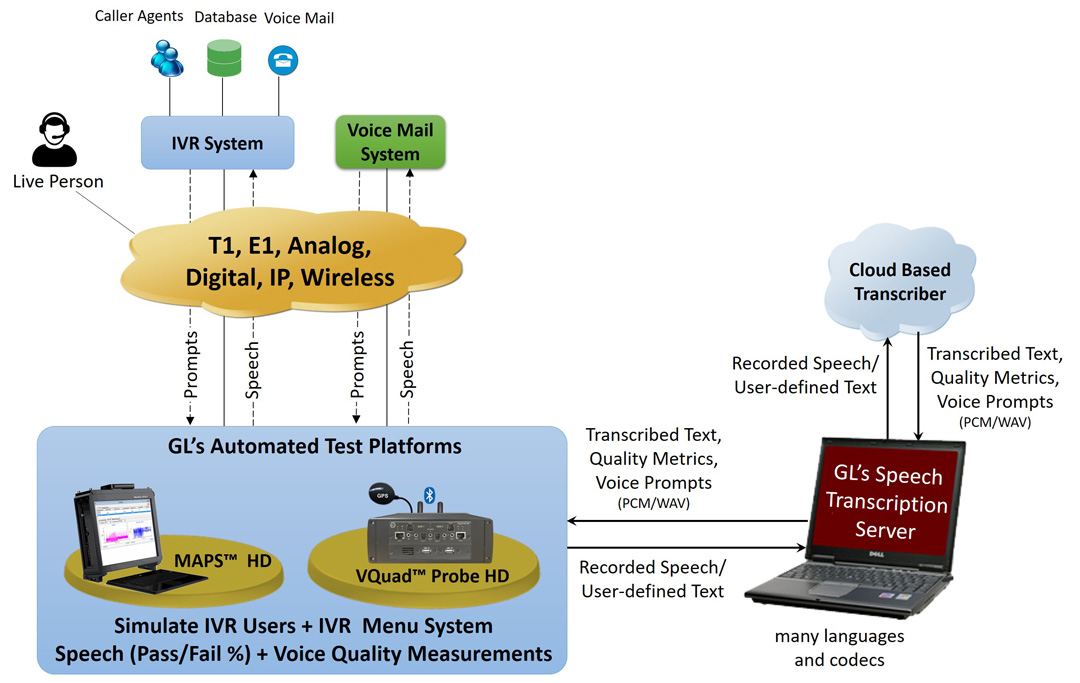 Interactive Voice Response (IVR) and Voice  Mail (VM) systems depend on DTMF digits, or tones, as inputs from the users, based on which the system presents a menu for automating various services to users. Depending on the application such as banking, hospitality, or enterprises, the branching of the menu can get complicated, and this requires accurate testing prior to deployment. 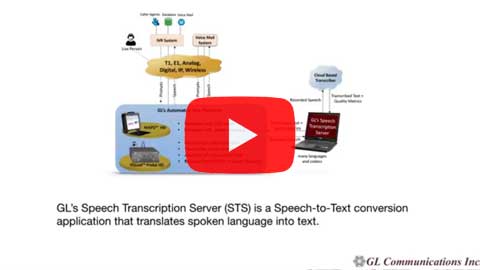 GL’s intrusive test tools such as MAPS™and VQuad™can be used to automate testing of IVR tree traversal for pass/fail conditions with great precision. Record each prompt (IVR menus) to file in an automated fashion and forward the recorded audio files for Speech-to-Text (STS) Transcription Server for transcription and analysis. Both MAPS™ and VQuad™ testing platforms allow IVR testing over various network types such as 2-wire (FXO, FXS), TDM, IP, and Wireless (Bluetooth®, Radio, VoLTE, UMTS, GSM,...). The test procedure adapted by these test tools is not limited to IVR testing but can also be applied to any announcement verification and voicemail testing, where the voice prompt is recorded, transcribed, and compared with expected text.

MAPS™ provides a unique architecture for multi-interface, multi-protocol simulation, which make it suitable for testing any core network, access network and inter-operability functions. VQuad™ Probe HD is an all-in-one self-contained hardware supporting multiple physical interfaces for connecting to practically any end point in wired or wireless network while automatically performing end-to-end voice and data testing over any network.

Simulation of IVR Users with VQuad™/MAPS™

Using the VQuad™, IVR testing is performed by interfacing at the end point in the network. The VQuad™ can send a pre-defined voice sample from near to far-side, record at the far-side and analyze based on the file sent from near-side. This is a very accurate method for Voice Quality measurement but requires equipment at both ends of the call. Alternatively, if access to both sides of the call is not available, the Speech-to-Text analysis feature in VQuad™ allows to simply specify a sentence at the far-end and provide a certainty score of the recorded file. Speech analysis results can be sent to VQuad™ Central Database and viewed through GL WebViewer™.

Network providers use the test tool to record the voice prompts associated with the IVR, perform a Speech to Text conversion on the recording to confirm the prompt was proper (based on what the prompt should be), and thus confirming their IVR functioning. The test tool can be used to verify network quality as well as effect of different codecs on the speech quality. VQuad™ supports APIs and CLI to automate and control testing remotely.

MAPS™ test platform covers solutions for both IVR simulation and analysis. MAPS™ can replace any node or entity within the network while also allowing for high volume user simulation. MAPS™ allows transmission and recording of voice audio files over any telecommunication network such as FXO/FXS, 4-Wire, ISDN, SS7, GSM, UMTS, and VoLTE.

GL's test tools can simulate the IVR end users and IVR system. This procedure is not limited to IVR testing and can also be applied to any announcement verification and voicemail testing, where the voice prompt is recorded, transcribed, and compared with expected text. 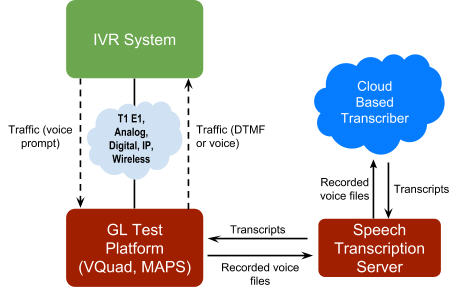 At the IVR user end, the tools can perform following actions -

At the IVR System end, the tools can perform following actions - 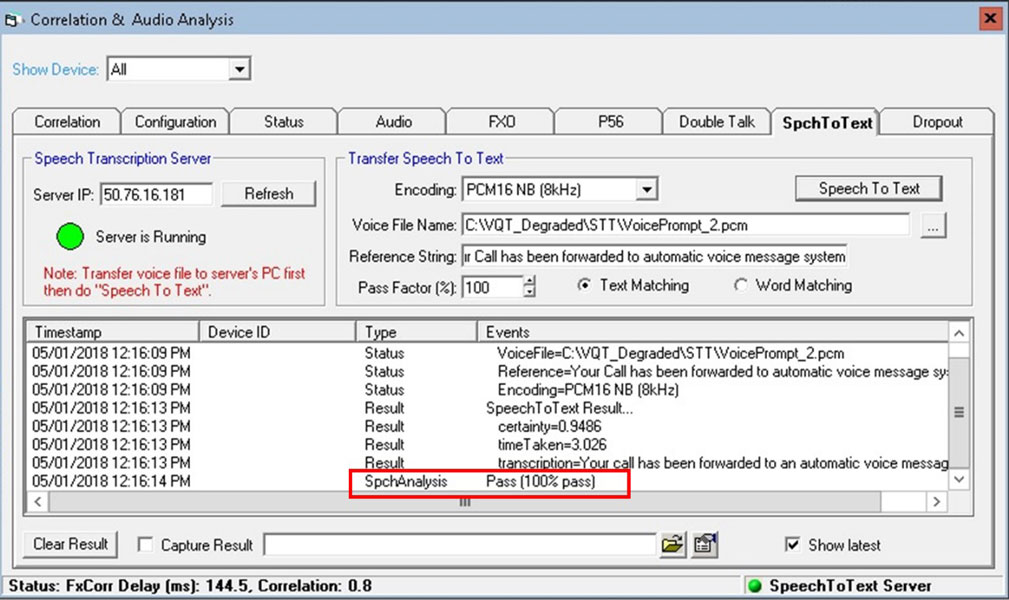 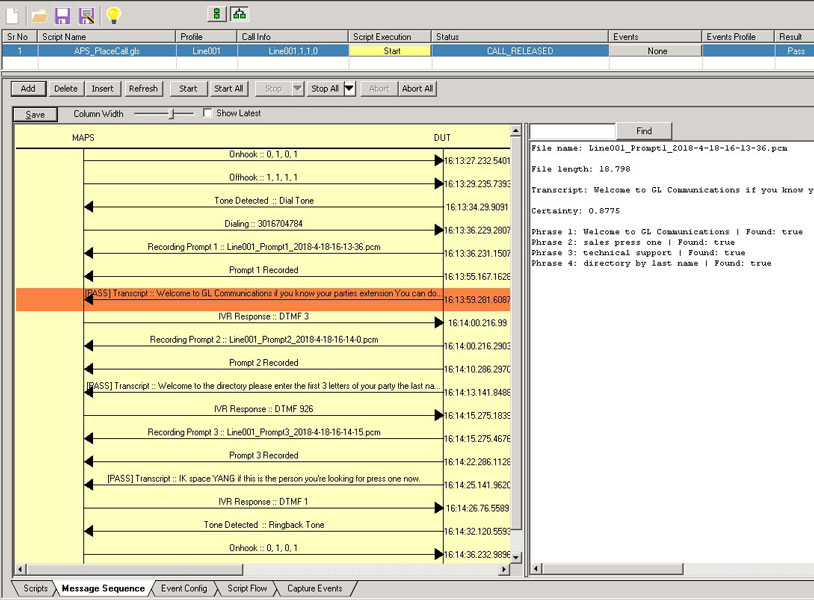 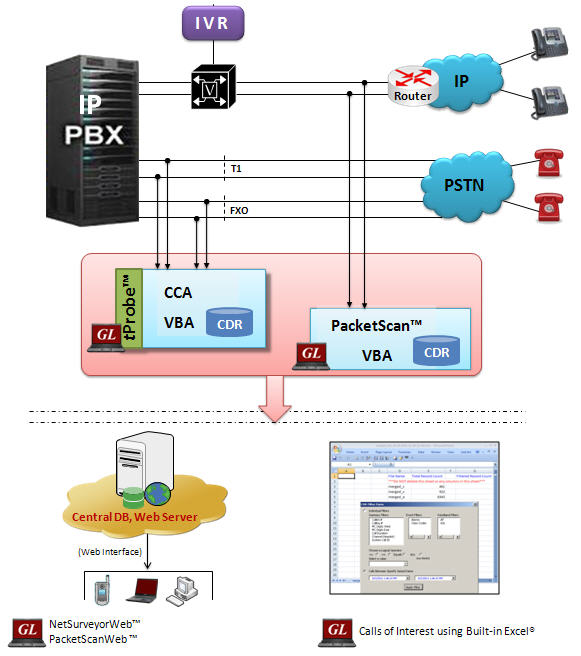 GL's Call Capture and Analysis (CCA, PacketScan™, PPP Analyzer) solution is used to capture and monitor live traffic over TDM, and Packet networks. The output of this system centers around each 'call' and for each call it reports comprehensive information occurring on T1 and E1 lines and IP networks, including,