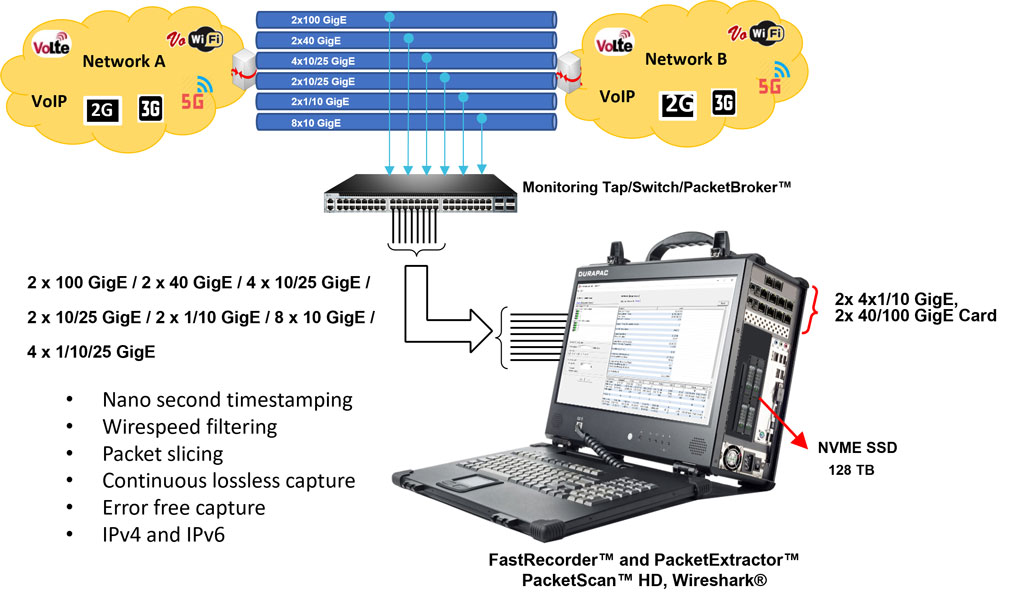 Packet capture and analysis is crucial for managing large and small-scale networks. Tools to capture and replay are often useful for service providers who wish to make field captures of crucial behavior and want to carefully reproduce them in a lab.

Recorded high speed data can be used not only for examining each packet in real-time, but also examining trends across packets or streams of related packets to predict potential issues or potential illicit activity. Playing back the recorded high-speed data can recreate the real-time packet network in the lab for further diagnosis.

Today's networks are built with switches, routers, and gateways interconnected with 1, 10, 25, 40, and 100 Gbps full duplex fiber optic lines. These fiber connections increasingly carry packets (vs. circuits) with data, voice, and video, interleaved, aggregated, and burst out at ever faster, bigger, and longer distances.

Diagnosing issues among these elements requires error free, non-intrusive interception at the full rate (wirespeed), then storing for post analysis with a packet analyzer. Naturally, at such high rates, capturing and storing require a unique and ingenious architecture, large RAM, and hundreds of  terabytes of storage. Additional features, like wirespeed filtering, packet slicing, storing, and later extracting intended application streams are also vital.

PacketRecorder™ and PacketReplay™ provide record and playback of IP traffic up to 10 Gbps.

In PacketExtractor™ mode, the recorded traffic file on selected network interface ports and drives can be extracted in the formats PCAP or PcapNG (Wireshark® format), or HDL (GL Proprietary format), and HDDAT (GL HD Proprietary format) and analyzed using any packet analyzer such as GL's PacketScan™. It also supports sequence number verification of extracted packets (BERT verification) Live traffic captured on a network using the Recorder utility, PacketScan™, or Wireshark® can be easily recreated in the lab.

The traffic captured on a live network can be analyzed using packet analyzers such as PacketScan™ - All IP analyzer or Wireshark®.

The FastRecorder™ application has two modules such as Capture Module and Write Module. In the host buffer, the packets are segmented into different frames based on segment sequence number and segment sequence length and these stream of frames are captured from the selected network interface and the write module will save the captured traffic in the trace files in metadata format in to the SSD/RAM Disk.

The pre-recorded captured files (.dat format) stored in SSD/RAM disk will be fed to PacketExtractor™ application.

It reads the metadata file which contains the information of the recorded data on each drive with time stamp. The filters can be applied for extracting traffic of interest. The trace files segments are reassembled based on segment sequence number. The segment sequence number and segment length are used while analyzing or reassembling the segments.
The Extractor module extracts the packets from the reassembled segments. The write module will write the extracted packets to HDL or PCAP or PcapNG. The BERT verify option can be used to analyze the sequence number of extracted packets. 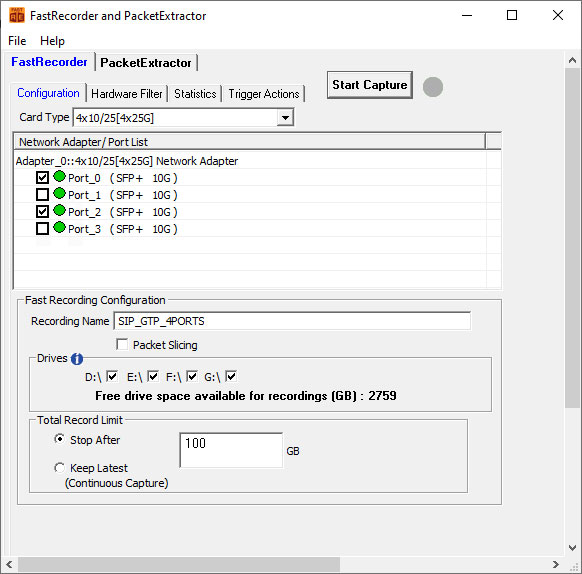 The Hardware Filter option allows user to easily set up filter conditions to filter out unwanted traffic at line rate, continuously capture only the traffic of interest, and modify filters on the fly.

Example: Filtering GTP Traffic
Up to 10 filters can be defined based on various parameters in the protocol layers. As an example, GTP is configured in the below figure. 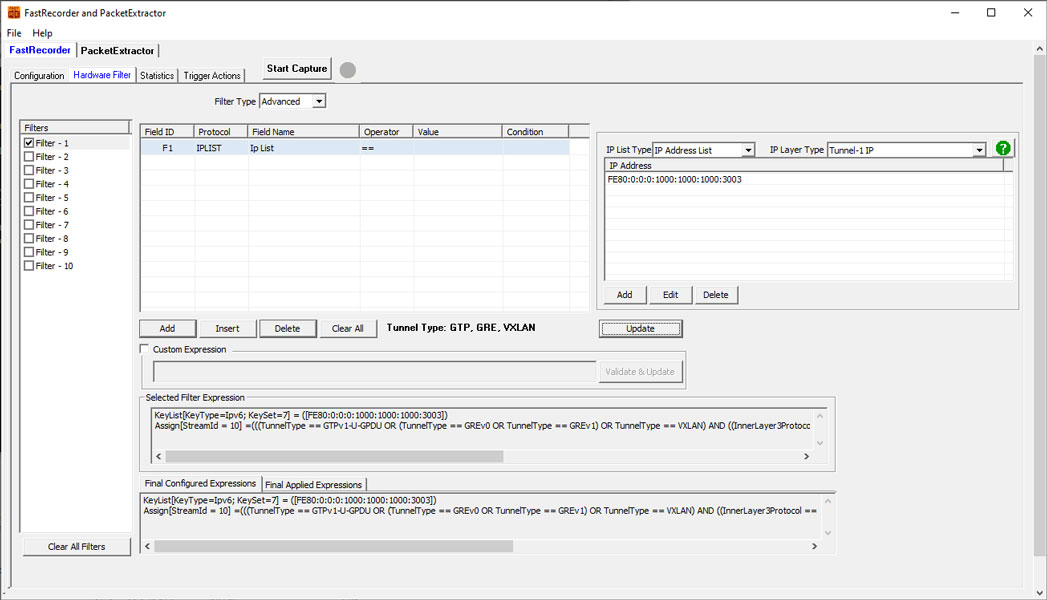 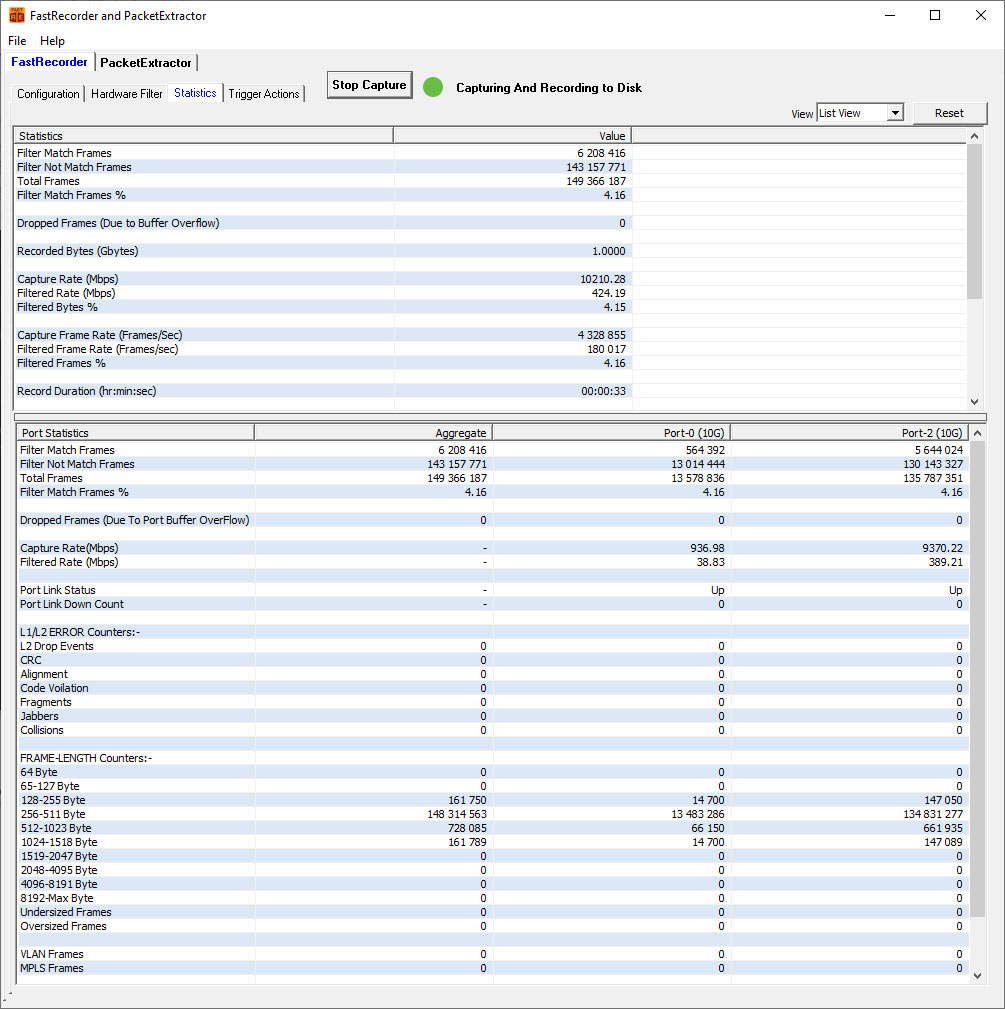 PacketExtractor™ application consists of configuration settings that allows user to extract recorded files on the selected HD NIC interface port with or without applying filters and by specifying the different limit criteria (Time, Packet Count and Size) into required output file format to analyze the results using PacketScan and Wireshark application . User can also save the extracted traffic in multiple files by providing the file size to create a new file after every specified file size.

In the packet extraction from the stored recordings without filter the Extractor Filter option is unchecked and no filter configurations are done to extract the traffic. 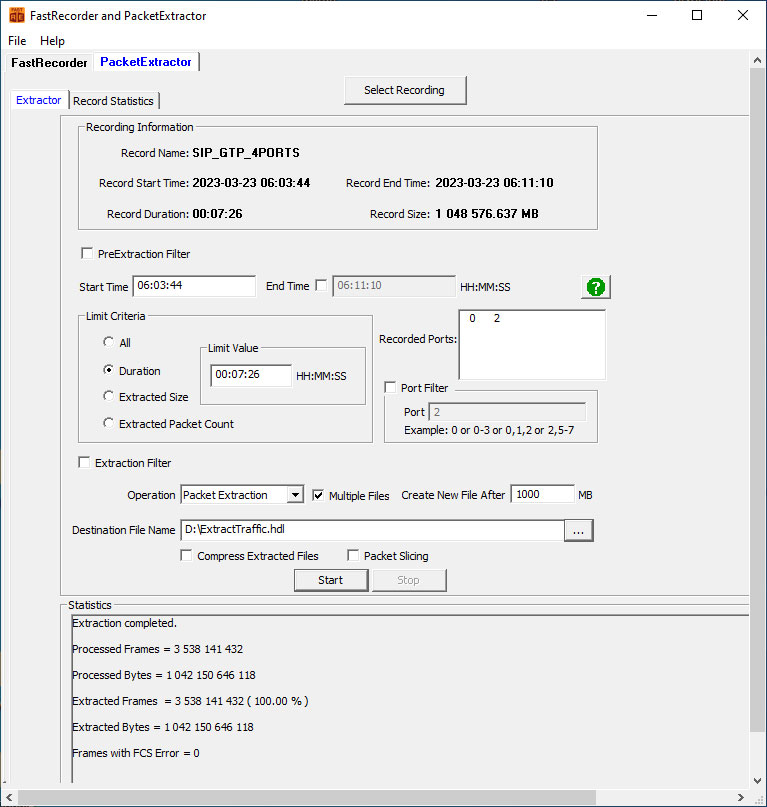 In the packet extraction from the stored recordings with filter the Extractor Filter option is checked and required filter configurations are done to extract the traffic. 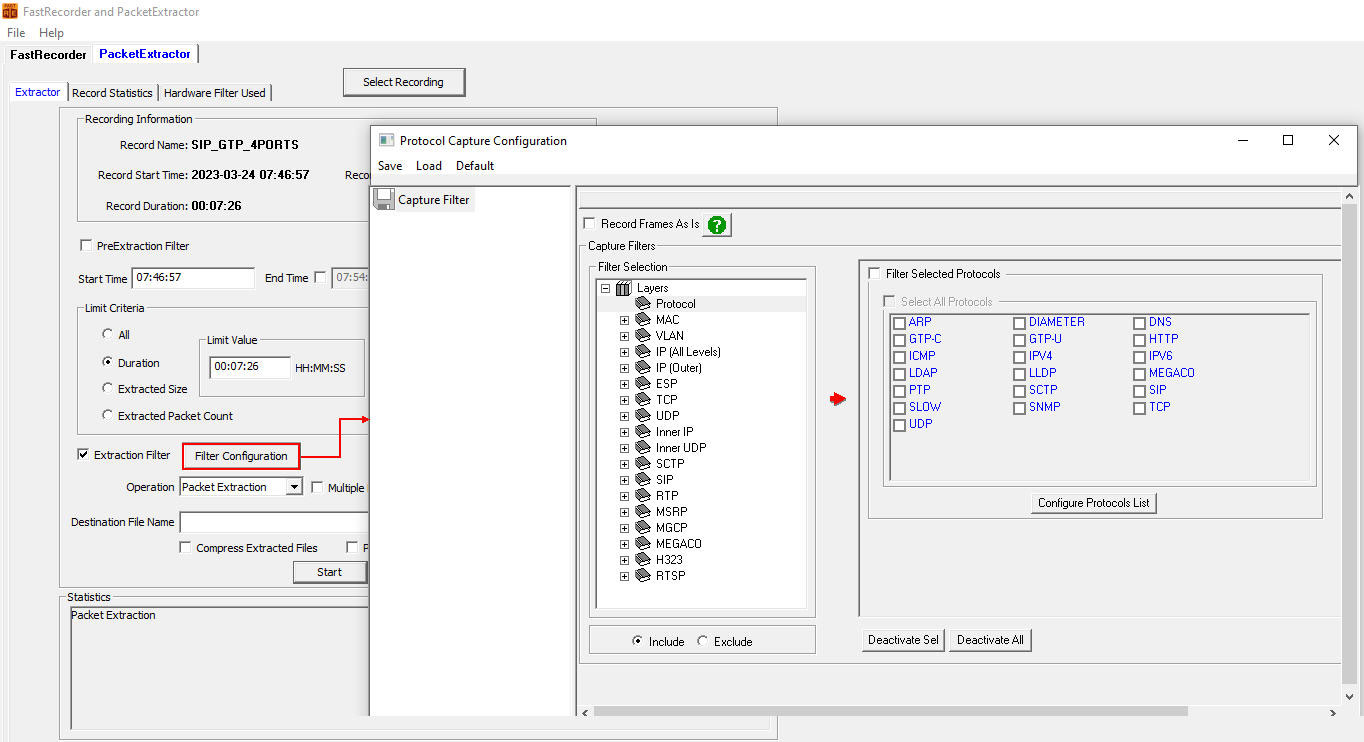 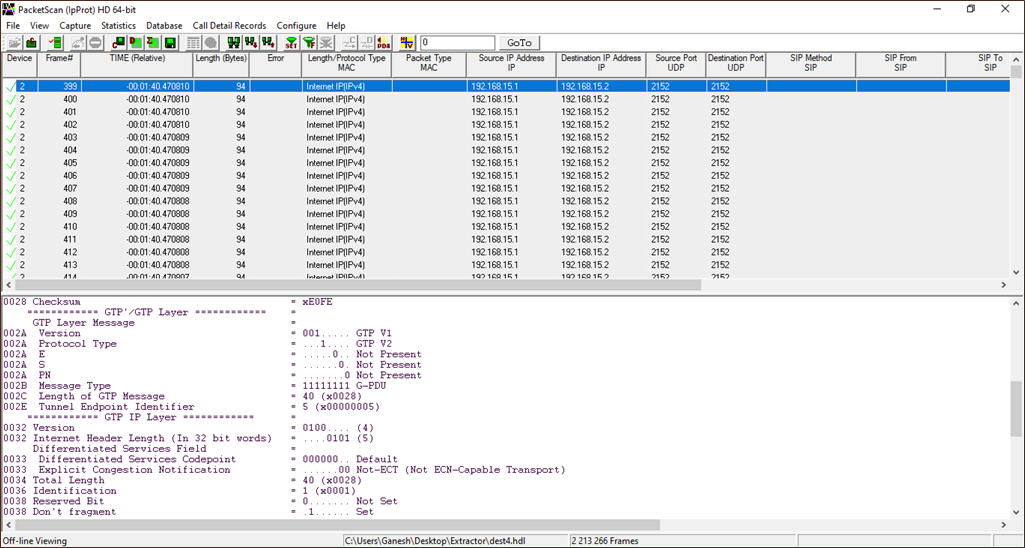 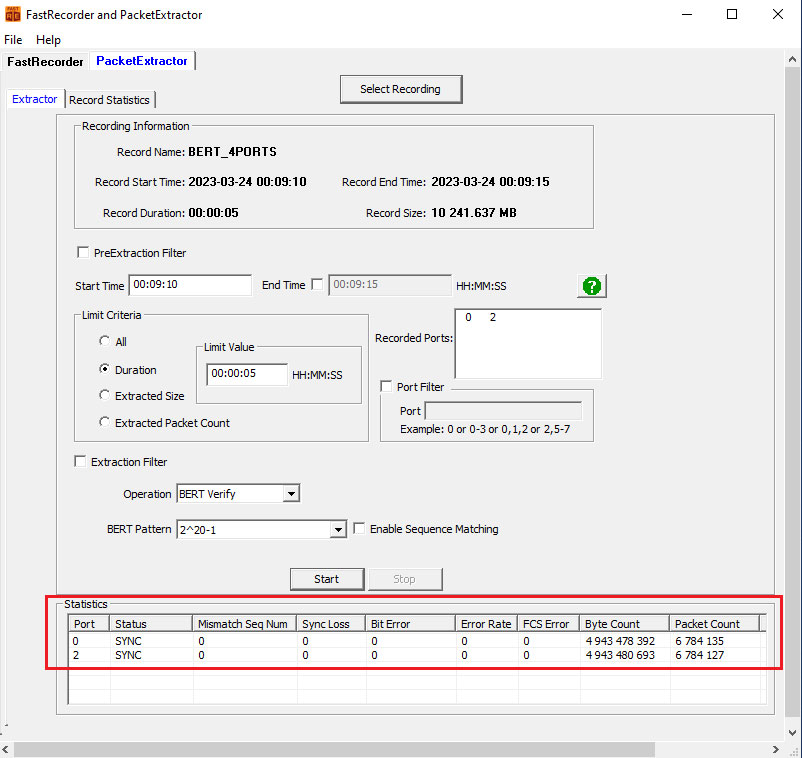