Emergency services are the backbone of a civilized society. Police, fire, and ambulance are contacted by a single emergency telephone number. In the US that single number is 911. In other countries, there may be a different unique number or several numbers. In the European Union, the number is 112, in others 999, and so on. A person at a Public Service Access Point, or PSAP, usually a governmental agency/service close to the location of the emergency answers the call and dispatches 1st Responders as required. PSTN, VoIP, and Wireless carriers have developed methods for voice connection to the right PSAP and to provide accurate location data necessary for dispatch.


Though carriers are rapidly transitioning to IP and Wireless infrastructure from Legacy, PSAPs will be last to convert from Legacy to NG. In 2-wire legacy circuits, Centralized Automatic Message Accounting (CAMA) trunk connects a carrier switch directly to the Selective Router (SR), a special 911 Switch that in turn connects to many PSAPs (Public Safety Access Points).  PSAPs are call centers where agents answer emergency calls and dispatch police, firefighters, and ambulances.

For complete details on the test requirement and the offered test solution, refer to CAMA webpage

For complete details on the test requirement and the offered test solution, refer to MAPS™ SIP MSRP webpage.


The Wireless Drive-Test solution includes GL's VQuad™ with Dual UTA HD supporting call control of variety of mobile device networks – from 2G to 4G LTE and 5G, including the capability of sending/recording voice, testing video conferencing, and testing a variety of data over the mobile devices, while analyzing their performance.

A GPS option permits time synchronization between two geographically separated systems as well as location information for drive testing. With an added wireless network connection, all functionality can be remotely controlled, and all results transmitted to remote locations can be accessed on-the-go. You can simply load configurations and start/stop the tests, grab test results and stream files to the command center locations.

NetSurveyorWeb™ software is a core network monitoring solution for wide range of protocols and is based on an open three tier distributed architecture driven by non-intrusive hardware or software probes, intelligent software, and a database engine. 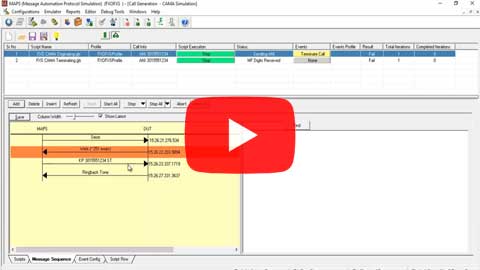