GL's enhanced PacketCheck™ is a comprehensive PC based Ethernet / IP test tool with BERT and Throughput testing abilities. It is very easy to use as a general purpose network performance analysis tool for 10Mbps, 100Mbps and 1Gbps LANs and WANs.

GL's enhanced PacketCheck™ is a comprehensive PC based Ethernet / IP test tool with BERT and Throughput testing abilities. It is a general purpose network performance analysis tool for 10Mbps, 100Mbps and 1Gbps LANs and WANs. Throughput up to 800 Mbps can be easily tested.

PacketCheck™ makes use of PC's network interface card (NIC) to transmit and receive Ethernet or IP packets over the network.

Also included is a powerful Report Generation feature to view report in XML and PDF formats. 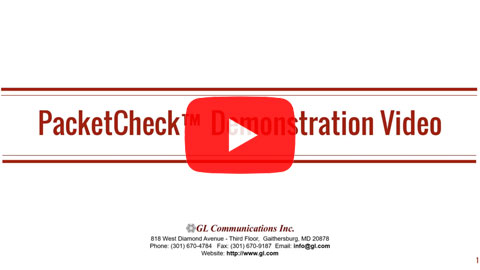 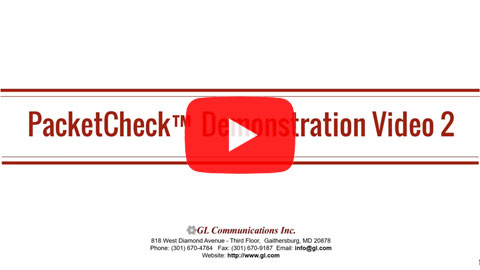 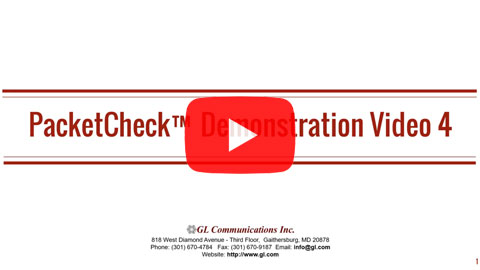 The physical layer of the OSI model is where data is physically moved across the network interface. At Layer 1 cables, hubs and repeaters are used to transmit data across the medium.

For Layer 1 BER testing, PacketCheck™ can test the basic data flow over the physical connection. Connect the two test PCs using an Ethernet cable as shown below:

Testing at layer 2 involves the switches, bridges, or NICs as the DUT. The bridges, switches, and NICs handle physical addressing, packing data into frames, and sequencing data frames. Only the MAC addresses need to be configured for layer 2 testing.

GL's PacketCheck™ can test the basic data flow over the network. This test is performed in order to

Stacked VLAN ID feature is used to simulate Carrier Ethernet as shown below, where the SP VLAN ID is stacked on top of CE VLAN ID. Stacked MPLS (up to 3 levels) is supported. Various test combinations such as single MPLS, multiple MPLS, VLAN + MPLS can be tested for single and multiple streams.

The Transport Layer (Layer 4) provides end-to-end, error-free reliable data transfer. TCP and UDP are the most common Layer 4 protocols. For Layer 4 testing, source and destination UDP ports need to be configured in addition to MAC and IP addresses.

PacketCheck™ supports BER testing at Layer 3 as well as Layer 4.

Testing at Layer 3 using GL's PacketCheck™ can be accomplished as shown in the figure below. Here, two PacketCheck™ applications operate in separate IP networks and are connected through routers, which route the frames based on the IP addresses in the test frames. Since IP networks encompass various types of physical networks consisting of LAN and WAN links, there is lot of scope for packet modification, packet loss and out of order packets. GL's PacketCheck™ helps measure these metrics of the IP network.

Two test scenarios at Layer 3 / 4 are as depicted in the diagram where the information in layer 3 / layer 4 is transmitted through the network in packets.

Scenario 1 - Source & Destination PC are located within the same IP network, and hence are directly reachable.

Scenario 2 - Source & Destination PC are located at different IP networks, and are connected through routers.

At Layer 4 testing, UDP packets are sent. This testing is useful in cases where there are firewalls which can intervene at network boundaries to reject, pass or modify packets.

The MAC and IP addresses of the available NICs in a PC are displayed in the GUI. PacketCheck™ can be configured in Normal or Loopback mode.

Here you can configure the source and destination MAC Addresses. In addition, user can specify the Length/Type field value. Users can enable VLAN up to 3 stacks and configure with the headers.

Selecting MPLS enables MPLS layer for the test. If MPLS is selected MPLS header is inserted after Ethernet header, and higher layer is by default set to IP. PacketCheck™ supports MPLS/IP (i.e., selecting Layer 2.5 as MPLS and Layer3 as IP) only. In this case, IP header will be inserted after MPLS. If None is selected for Layer 2.5, it will be a normal Ethernet packet, without the MPLS header inserted.

Increment Identification option may be used to set the initial IP header identification value, which will be automatically incremented for the subsequent packets.

Here you can configure the source and destination UDP ports.

Layer 1 BER Testing supports only PRBS patterns through predefined files, and user-defined fixed pattern of up to 24 bytes.

Users are allowed to configure Frame size, Bandwidth, Inter Frame Gap (IFG) and transmission stop condition parameters during packet transmission. Users can specify frame size of fixed / random length, and define the transmission rate in Bit per second. The received frame details can be logged into a binary (*.bin), HDL, and also BERT files for each stream, which are used for diagnosis purposes.

The HDL file transmission has necessitated PacketCheck™ to operate in 2 different modes. The traffic generation mode is common to all the streams.

Using the “HDL File Playback” feature within PacketCheck™, the packet data can be carried as pre-recorded traffic files (GL's proprietary Ethernet traffic capture format *.HDL files) to destination points and the same can be verified at the receiving end, which can also be a PacketCheck™. This feature can be used GL’s Mobile IP Core traffic module (requires Additional Licenses) to simulate GTP traffic over UMTS or LTE network.

Generally, in an EPC network, are two types of data pipes can be found - Default Bearer (with non-guaranteed QOS) and Dedicated Bearer (with assured guaranteed QOS). The PacketCheck™ can be used with GL’s MAPS™ UMTS / LTE Simulators to encapsulate the generated packet data within GTP headers when transmitting through the gateways such as SGSN & GGSN, or SGW & PGW to verify the bearer allocation bandwidth at the end points. The packet data traffic generated at one end is received at the other end can be verified with various statistics such as packet loss, lost frames, bit error count, Tx Rx frames count and other traffic parameters.

Users can introduce impairments into the outgoing traffic using various impairment types and duration. Supports various types of impairments - DELETE BYTES, INSERT BYTES, AND, OR, & XOR. Impairments can be introduced at specific intervals or can be set to continuous insertion on each stream.

Screenshot of Impairment Types and Settings

PacketCheck™ can measure One-Way Delay (OWD), calculating the delay at the receiving end in µsec. OWD can only be correctly calculated on a single PC with 2 NICs running PacketCheck™ on each of them. Only a single license needs to be purchased in this scenario. OWD-Tx option embeds Tx Timestamp within a special OWD packet along with the normal stream data. OWD-Rx option receives and detects the special OWD packet.

Also, PacketCheck™ can be configured to measure the average Round Trip Delay [RTD] value of each packet in µsec. RTD is applicable to Tx_RX streams with DUT/ remote end configured in Loopback mode for RTD to work.

Screenshot of One Way Delay Measurement Settings and Statistics

While the test is running, users can view statistics for each stream. These include bit error rates, throughput, lost or out of order frames, RTD and OWD.

PacketCheck™ can generate reports at the end of every test. The reports include statistics, configuration information, NIC details, stream and aggregated statistics, and other test information. Reports can be generated in Portable Document Format (PDF), and Extensible Markup Language (XML) format with customizable headers, footers, comments and logos. User can also generate periodic reports during the test execution.

Back to VoIP Analysis and Simulation Index Page