Welcome to another issue of GL Communications newsletter providing information and insight into our MAPS™ SIP (Session Initiation Protocol) Emulator for low and high density applications from hundreds to tens of thousands of simultaneous calls, with signaling and traffic generation as per current standards. 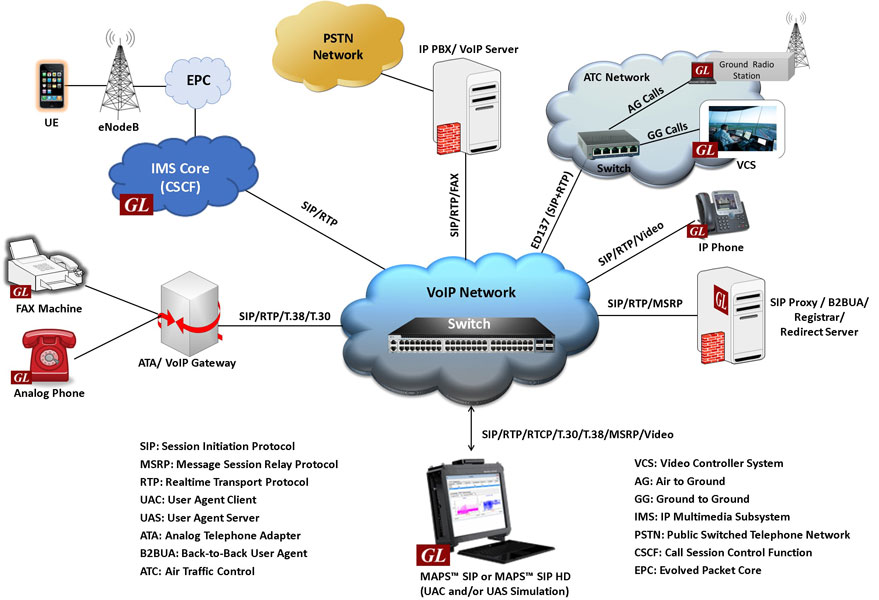 SIP has become “the IP protocol” for voice connections (wired and wireless), video conferencing, instant messaging, and other forms of media, e.g FAX. Many signaling and traffic services are migrating to SIP, including emergency 911, push-to-talk for air traffic control, and group voice call services used by as First Responders.

A single MAPS™ SIP instance can act as more than one SIP entity and generate any SIP message in a VoIP network and hence equipment needed to test is reduced. MAPS™ framework allows running a set of tests/scripts sequentially, randomly, and simultaneously for multiple iterations. Users can schedule tests/scripts to run automatically on scheduled days and times. Bulk calls can be generated to simulate different load patterns.

The MAPS™ SIP Conformance Scripts is designed with 300+ test cases, as per the SIP specification of ETSI TS 102-027-2 v4.1.1 (2006-07) standard. Test cases include general messaging and call flow scenarios for multimedia to call session setup and control over IP networks. Test results are logged as pass/fail. Test cases verify conformance of actions such as registration, call control, proxies, and redirect servers.

GL’s MAPS™ SIP application is also available in the High-Density version (requires a special-purpose network appliance or portable platform), capable of high call intensity (hundreds of calls/sec) and a high volume of sustained calls (tens of thousands of simultaneous calls/platform).


Please contact us if you are interested in MAPS™ SIP Protocol Emulator or any other application listed on our website. We would be happy to discuss your testing needs and we look forward to hearing from you.