SonetExpert™Channelized Analyzer comprises of hardware and software receiving and transmitting data using SONET and SDH networks and communicating with the GL Soft T1/E1 Analyzer application. Provides an essentially the same feature rich functionality as GL hardware based T1/E1 Analyzers with the difference that T1/E1 frames are multiplexed into SONET/SDH frames and transmitted over optical lines.

SonetExpert™ Unchannelized Analyzer is capable of SONET/SDH testing over OC-3/STM-1, OC-12/STM-4, OC-48/STM-16 and OC-192/STM-64 transports. SonetExpert™ is a versatile hardware platform that supports both Ethernet (up to 10G) and SONET/SDH (up to OC-192/STM-64) testing, two ports support SONET/SDH testing. Multiple hardware units can be connected to a single PC to increase test port density. The software provides a web interface, and is accessed through any browser running on any device like PC, Laptop, tablet etc. In addition to Raw SONET/SDH, it also supports Packet Over SONET/SDH (PoS) and ATM over SONET/SDH. 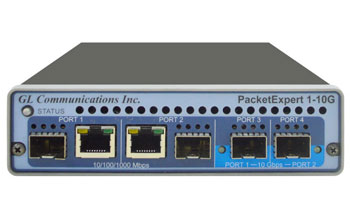 The LightSpeed1000™ is a Quad OC-3 / STM-1, OC-12 /STM-4 analyzer for analysis and emulation of unchannelized and channelized ATM, POS, RAW, and Ethernet traffic. The analyzer is available in PCIe card and USB-based unit forms, sporting a 2 GB of DDR2 RAM, a GigE, and a USB 2.0 interface making this one of the most versatile and powerful tests platform in GL’s repertoire.

GL's STM-1 Mux is a cost-effective, compact (only 1U high), SDH (Synchronous Digital Hierarchy) multiplexer that is designed for applications in metro and access networks for efficient transport of traditional TDM and emerging data traffic.