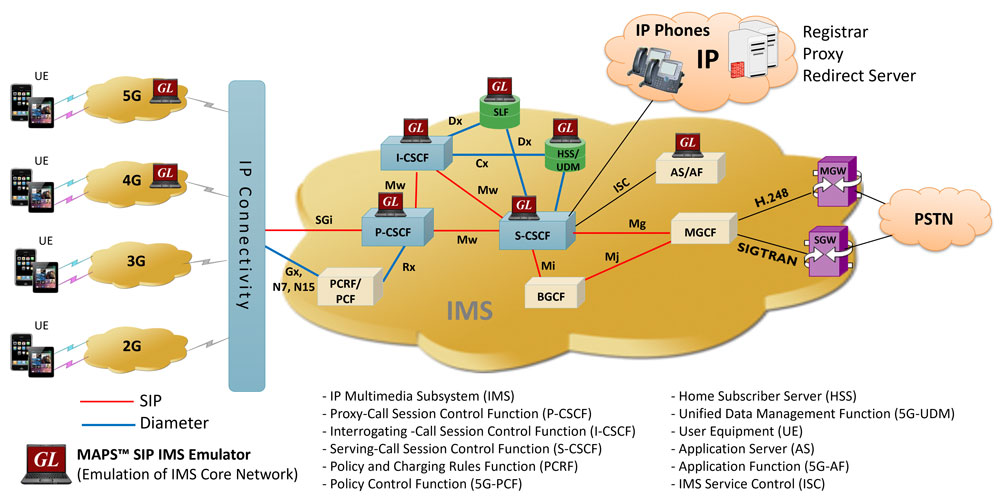 Internet Protocol (IP) Multimedia Subsystem, popularly known as "IMS", is built on Session Initiation Protocol (SIP) as the base to further support packaging of voice, video, data, fixed, and mobile services on a single platform to end users. It provides a unique convergence platform for different types of networks - whether it is mobile, satellite, broadband, cable, and fixed networks, with a goal of building an efficient interoperating networks.

GL's MAPS™ SIP IMS test suite provides an advanced full-fledged network environment that enables user to test their applications, devices, and services prior to deployment on a real-time network. It can be used to simulate all or specific elements within IMS network infrastructure using simple ready-to-use test bed setups. The network architecture shown above outlines the IMS Core Network elements which can be simulated using  GL's MAPS™ SIP IMS test suite.

MAPS™ SIP IMS  test suite is capable of simulating multiple UEs and IMS core elements such as P-CSCF, I-CSCF, S-CSCF, PCRF, MGCF. With the help of mobile phones, and other simulated wireless networks, the VoLTE Lab setup can be operated in real-time for making VoLTE calls and also for interworking with PSTN and VoIP networks. It includes ready-to-use scripts, as per IETF specification. Test scripts include general messaging and call flow scenarios for multimedia call session setup and control over IP networks. Logging and pass/fail results are also reported. Test cases verify conformance of actions such as registration, call control, proxies and other servers.

GL's MAPS™ SIP IMS supports simulation of all the nodes to achieve an end-to-end call simulation over LTE - IMS network. A Voice over LTE call can happen within the same network or between two different service providers.

The following are the possible call scenarios which are supported using MAPS™ emulator:


Call between UEs in different networks

The following network is an illustration of a call simulation from Non Roaming User to another Non Roaming User across different LTE - IMS Network (UE1 in ATT network to UE2 in Verizon network). 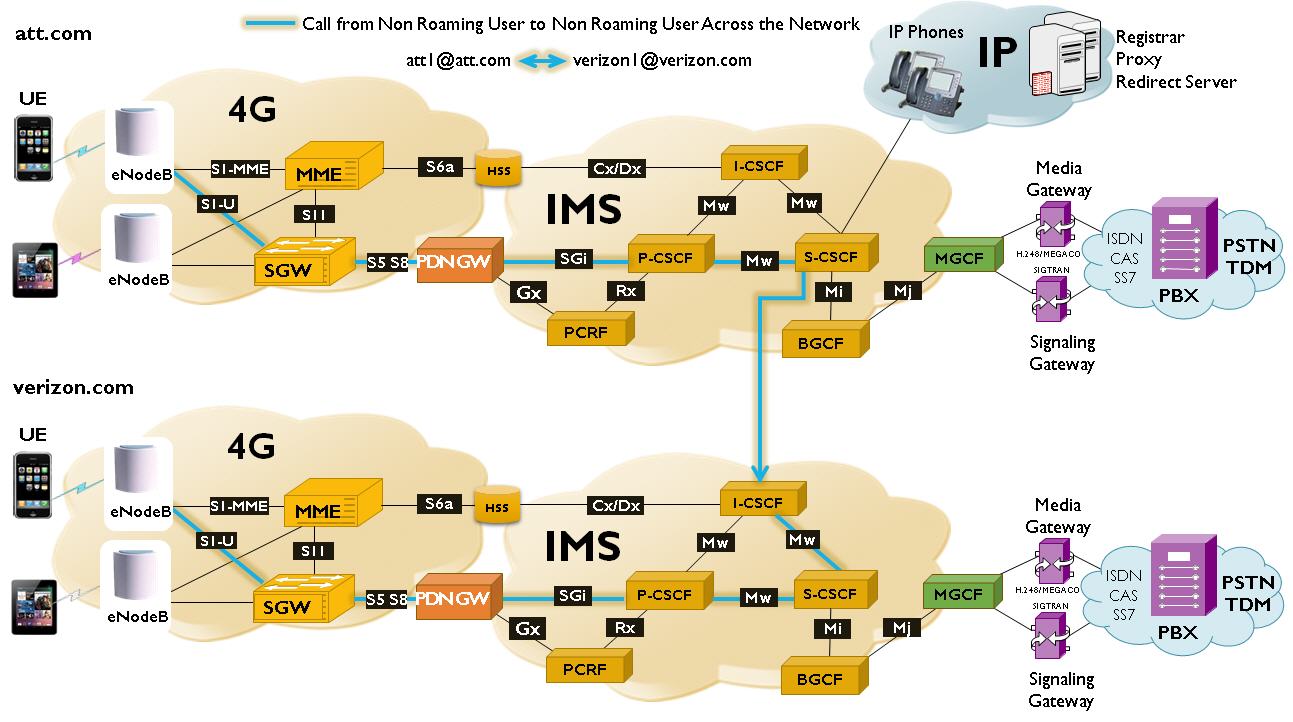 As depicted in the diagram above, each node in the LTE-IMS network can be configured and controlled testing can be performed using a single Remote MAPS™ Server.

The Remote MAPS™ Server feature within MAPS™ is a client server module, designed for multi-node multi-interface simulation. In IMS network, MAPS™ can be configured to simulate multiple nodes situated at various locations, which can be controlled using a single Remote Client GUI. The client application connects to the server and remotely accesses the MAPS™ functionalities simulating the configured nodes. The client communicates with the remote MAPS™ Server via the Listener running at the server location.

As depicted in the diagram below, UE1 registered to ATT Network is calling UE2 registered to Verizon Network. Once the preconditions are met and resource reservation is done, Call is established between the UE. 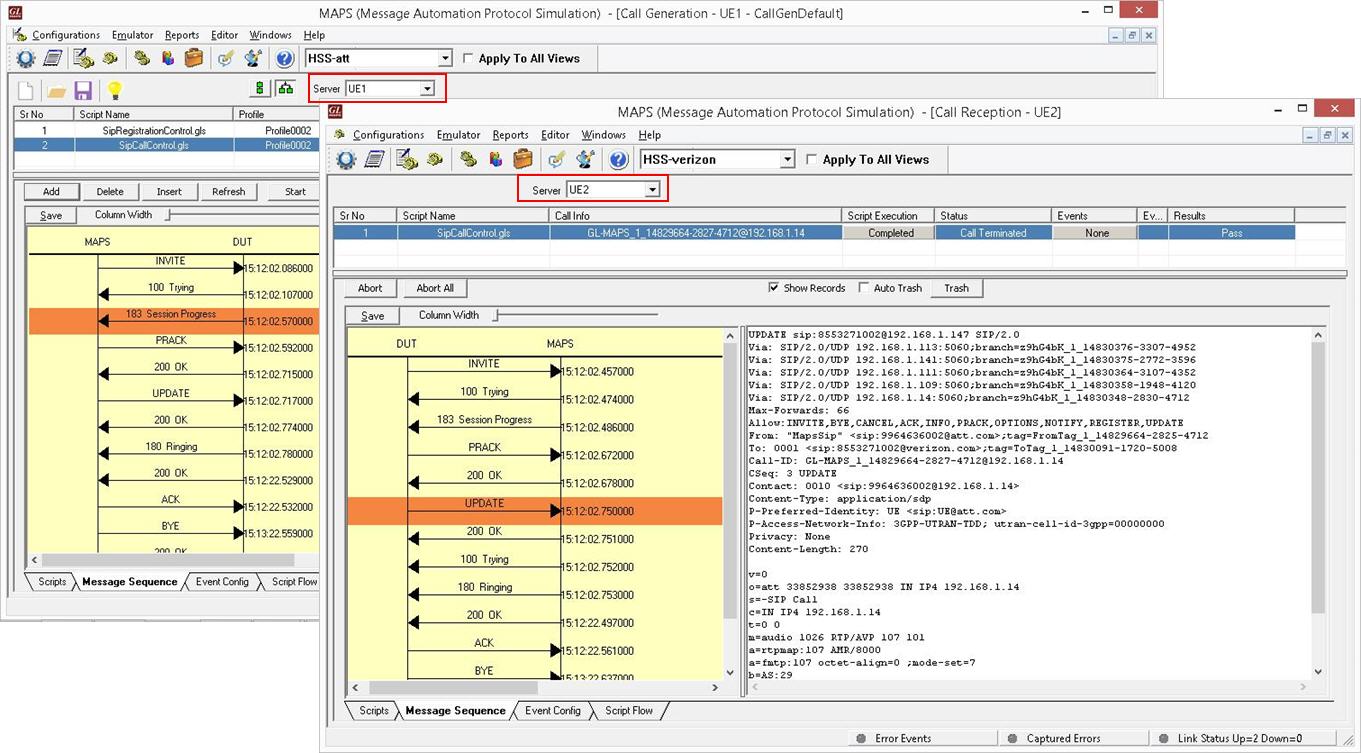 UE1 in ATT network and UE2 in Verizon network

Below diagram shows the Registration flow at S-CSCF which handles SIP Registrations and routing services for ATT Network. S-CSCF is a multi interface interacting with I-CSCF and HSS. 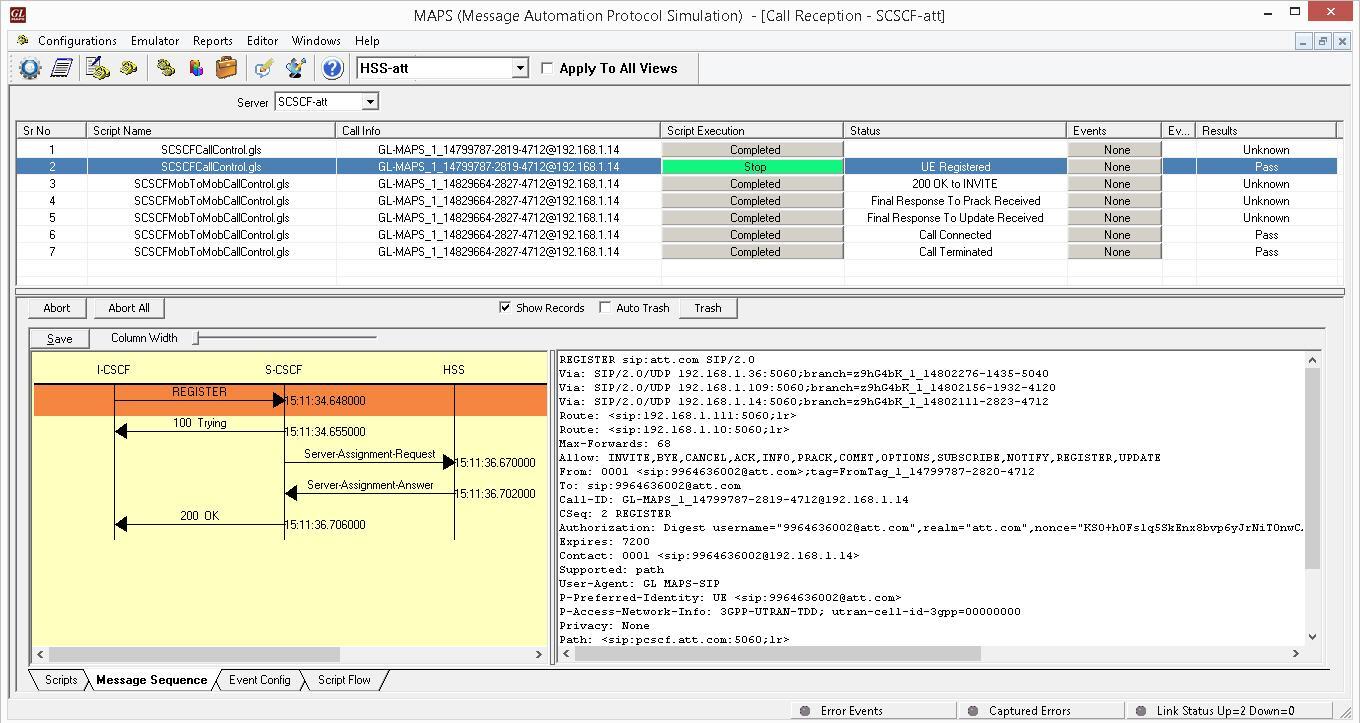 Registration at S-CSCF of ATT Network 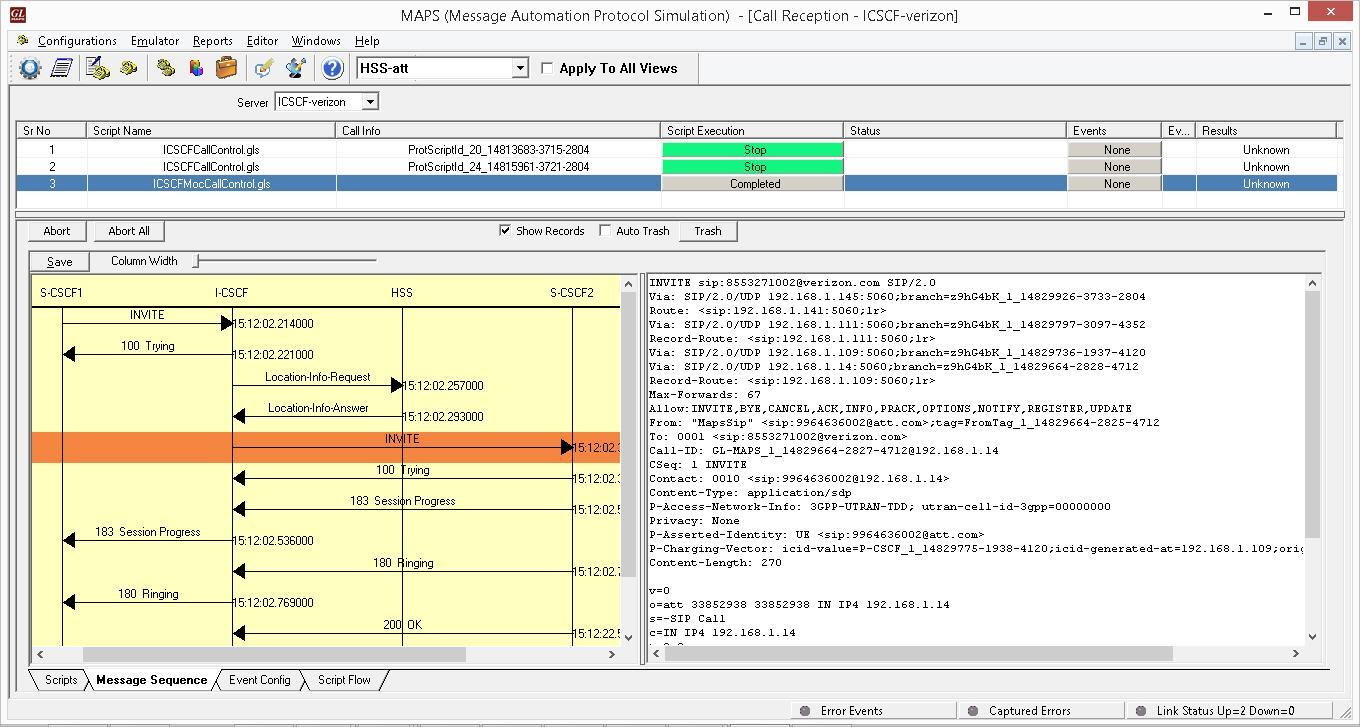