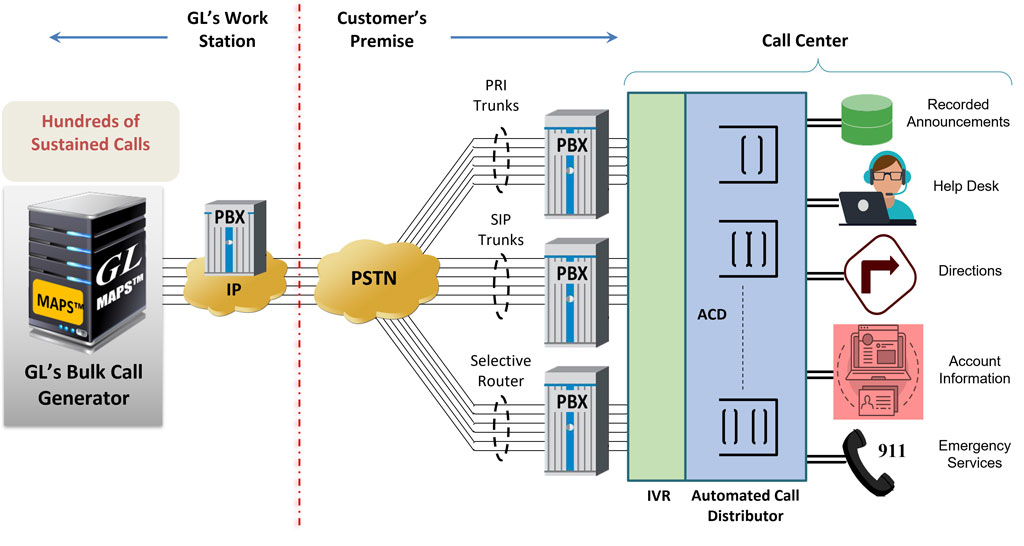 Testing call volume and routing is essential for Call Centers to confirm uninterrupted operation. GL Communications can generate hundreds of calls through the PSTN - at a sustained call rate - to your Call Center to test the telecommunications infrastructure and services. These calls can be generated as a service or directly from your lab environment by deploying the Call Generation test equipment.

Calls can be generated to any network including VoIP, TDM, and Mobile. In addition to testing call density, GL can also test IVR and VM functionality of the Call Center while also confirming Voice Quality.

Tens of thousands of companies and organizations rely on Call Centers to fulfil their mission critical capabilities and business functions including:

These Call Centers can be overloaded in disaster situations or unexpected events. Therefore, organizations use redundant telecommunications connections to the outside world (PRI, SIP trunks, etc.). It is essential to test if these trunks properly rollover under high load.

The GL solution uses the proprietary MAPS™ (Message Automation and Protocol Simulation) application to generate the calls while also generating the necessary traffic. The calls are fully customizable including the ability to send pre-recorded audio, tones, and digits. The call duration and call rate can also be controlled.

MAPS™ is a multi-protocol and multi-interface emulation software with a common framework to support emulation of a variety of signaling protocols and traffic generation including voice, tones, digits, fax, data, and video. It covers legacy PSTN, next generation VoIP, wireless equipment, interfaces, and networks. Interfaces can be Analog, TDM, IP/Ethernet or Wireless.

GL's test equipment is hosted in the cloud can make calls to any destination worldwide.

The following are typical applications where GL's bulk call generator tools can be used: