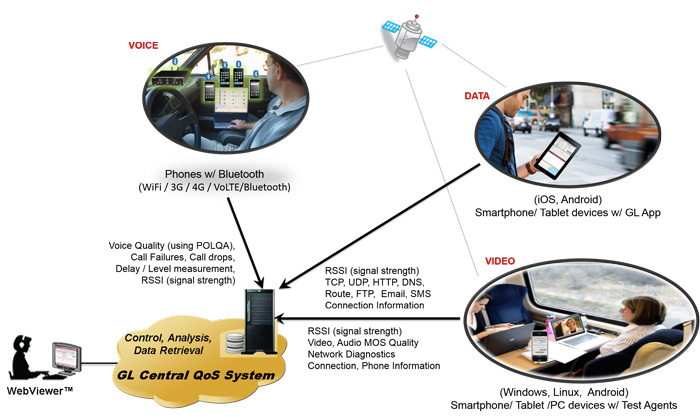 GL’s Wireless Drive-Test solution includes all the necessary functionalities within portable equipment for a true mobile test. The mobile device under test can be in your pocket, in your car, in a train, or virtually anywhere while tests are automatically executed in an automated fashion. The automated tests include Voice Quality, Video Quality and Data Quality.  The WebViewer™, a web-based client application, accesses the centralized database for results.

The Wireless Drive-Test solution includes support for call control of variety of mobile device networks – from 2G to 4G LTE and beyond, including the capability of sending/recording voice, testing video conferencing, and testing a variety of data over the mobile devices, while analyzing their performance.

Hardware associated with the Drive-Testing solution includes  GL’s Dual UTA for each mobile phone, and GPS Receiver for plotting co-ordinates during the drive testing, just plug into the cigarette lighter (for power) and start the test. VQuad™connects to the mobile device via the Dual UTA using Bluetooth. A GPS option permits time synchronization between two geographically separated systems as well as location information for drive testing. With an added wireless network connection, all functionality can be remotely controlled and all results transmitted to remote locations can be accessed on-the-go. You can simply load configurations and start/stop the tests, grab test results and stream files to the command center locations.

All the test measurements and statistics results are sent to central database along with GPS co-ordinates. Using WebViewer™, these results are plotted on Google Maps and can be accessed from anywhere in the world.

Drive Testing (for Voice) means testing the mobile device, either using the native phone app or a VoIP app on the phone, and establishing a call with another mobile device or a static (landline) device.

VQuad™ connects to the mobile device via the Dual UTA using Bluetooth. A single VQuad™, on a PC, along with Dual UTA can operate up to 4 wireless mobile phones (via (Bluetooth®, Wi-fi, 3G, 4G, LTE, PTT) simultaneously. The Dual UTA includes an optional GPS receiver for providing location which can be used to plot the results on Google Maps using the WebViewer™.

Data testing require only the mobile device (phone or tablet). Using the GL app (supports Android and IOS) manual and automated data testing can be performed.

All results along with GPS coordinates of when the test starts/ends are plotted in Google Maps which can be accessed using WebViewer™.

The results include RSSI (Signal Strength), Network, and Phone information.

While the phone is connected to the Central System, all Connection Drops (loss of connection) are reported to the central database and can be plotted within Google Maps. This helps to find problematic areas within the network. 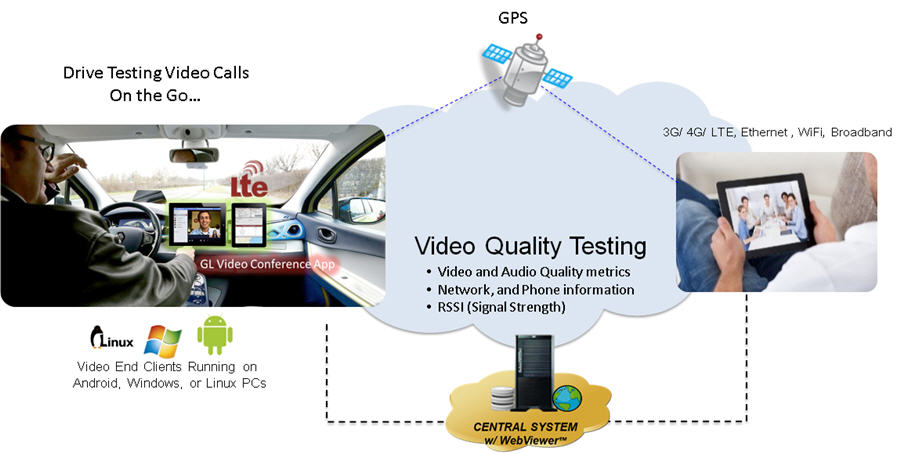 Video testing requires only the mobile device (phone or tablet). Using the GL app (supports Android and Windows/Linux) manual and automated video testing can be performed.

Video Conference testing supports testing between any two devices (agents) including Android mobile devices, Windows and Linux PCs. Each test allows configuration of the test such as video rates and bandwidth.

Using the GL app or the VQuad™ software, both manual and automated video conference testing can be performed between any two agents. The A/V QoS results are provided along with several analytic metrics.

Tests can be fully automated with results along with GPS co-ordinates sent to the central system. The results are plotted on Google Maps using the WebViewer™.

WebViewer™ features ability to control any tests, access results and results mapping to Google Maps. In fact, GL's mobile test solution provides the flexibility of connecting to any network, any service, and any interface.

As shown in the screenshots below, Google Maps option within WebViewer™ plots various Results, VQuad™ Nodes, and Mobile Devices based on the GPS co-ordinates available. Results include VQT POLQA, Data Tests, Video Tests, Call Connect Events, Echo and Delay Measurements. GPS position of Mobile Devices along with the Device PhoneID, Device Name and the location are plotted. VQuad™ Node locations and the VQuad™ Node status such as Down or UP are also plotted. These are differentiated using default color codes and call-outs. Plotting can be done real-time while drive testing and testing at fixed locations world-wide. 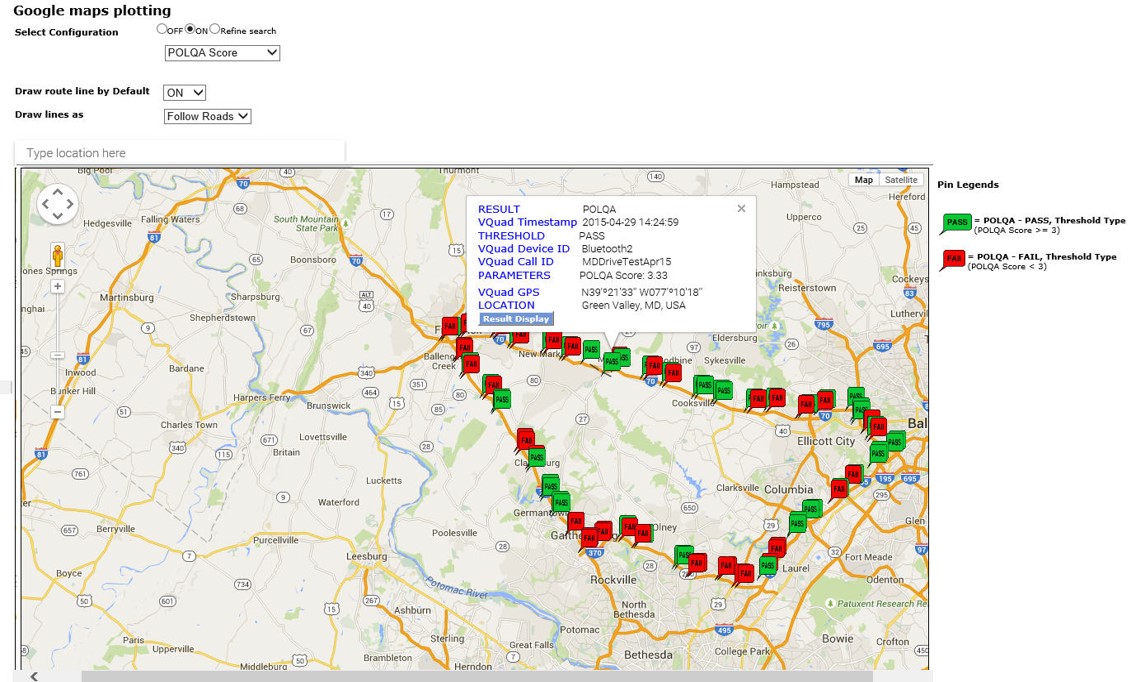