The picture above indicates conversation between two distant persons. The signal traverses the receive path into the echo canceller's Rin port, which monitors the signal and forwards it along through its Rout port.

The signal continues unaltered to the hybrid, a device that interfaces the PSTN's four-wire circuit to the two-wire subscriber line. This interface is not perfect, resulting in a reflection of a portion of the signal energy being reflected back into the four-wire circuit. This reflection manifests itself as echo, a delayed, attenuated and dispersed version of the original speech signal, which traverses the send path back to the original speaker. In some cases where, the echo is significantly delayed, it can be very annoying to the far end speaker, to the point of interfering with the conversation.

The function of the echo canceller is to detect and remove the echo. It does this by estimating the transfer function of the hybrid that produces the echo, which it accomplishes by comparing the echo to the original signal. The process of generating the estimate is normally iterative in nature -more the signal is seen, more refined is the estimate.

Once a reasonable echo path model has been calculated, the echo canceller can predict the echo that will result from the far end signal that it is monitoring. It can thus remove that echo by subtracting it from the signal on the send path (that is, by subtracting the estimated echo from the actual echo).

Monitor Rin and Sin using two Y Bridges, a straight and a Turn Over Cable on Card #3 and Card #4 (Port 3 and Port 4 can be on the same PC or a different PC) 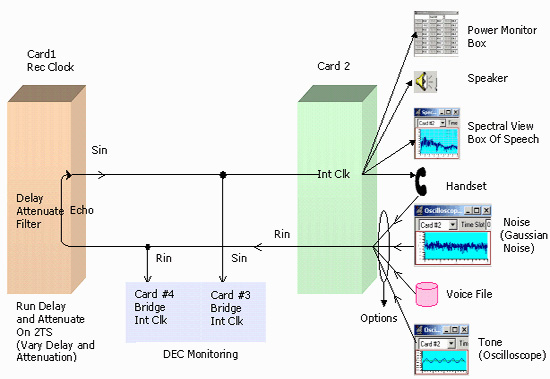 You need two Dual E1/T1 cards. These two cards can be on the same PC or on different PCs. 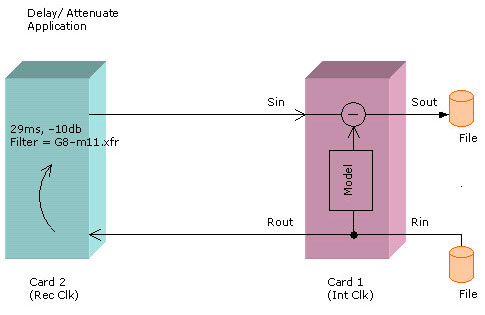 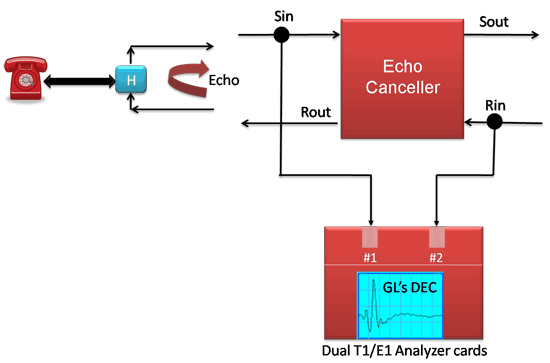 Timeslot Selection - Designate the timeslots on which echo cancellation has to take place by selecting the corresponding timeslot buttons.

Echo Cancellers are 4-port devices, with ports designated as follows. Select either a card (online operation) or a file (offline operation) as a port.

The various tabs provided under DEC Simulator are:

This 'View' presents the Echo Canceller's calculated transfer function. You can view the transfer function in either time or frequency domains. This also allows to pan or zoom the display, or to display coordinates.

This also indicates adaptation, double-talk, and presence of signal at Rin and Sin via LEDs. A sample View Page is displayed in figure below:

Immediately below the transfer function graph are buttons that are used to manipulate the graph.

All lamps are dark when the application is in standby mode. The indicator lamps are active for Adaptation, Rin/ Sin Signals, and Double Talk when run is in progress.

This displays various statistics for all active echo cancellers. A sample screen is as shown in the figure.

The following statistics are presented:

Logging helps to report various conditions and events in an *.txt or *.csv file formats. Note that logging is active only when an execution is in progress. A sample logging screen is as shown in the figure below.

The sections of Logging are described below: