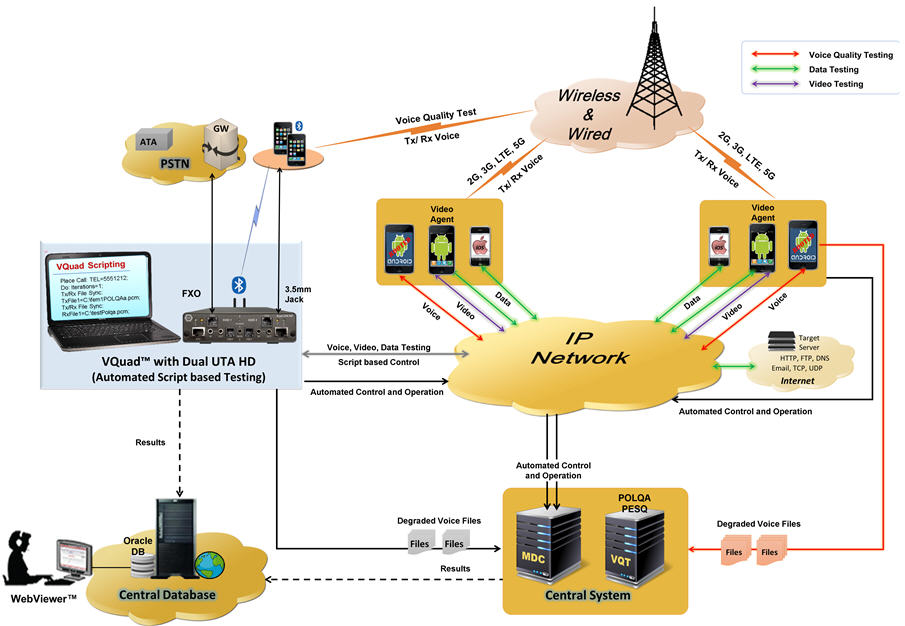 Speaking to the press, Mr. Robert Bichefsky, a Senior Manager for product development of the company said, “GL offers two mobile phone Apps - GLNetTestVQT app for performing Voice tests, and GLNetTest app for performing Video and Data tests, both can run simultaneously on same device. Tests are executed directly from the phone making it extremely portable.

The architecture diagram shown above depicts the GL Mobile Apps (GLNetTestVQT requires Android Rooted device for Voice Tests, and GLNetTest supports any Android or IOS non-rooted device for Video and Data Tests). In addition to the Mobile apps, the GL VQuad™ supports full remote and automated operation of the Mobile apps while also providing Voice end points to the mobile devices for Voice Quality testing.”

It also provides the features of transferring of recorded voice file automatically to the central system for voice quality analysis using POLQA (ITU-P.863).  Predefined test scripts can be run that can use the phone’s GPS time for proper synch between the two ends of the call. It also provides the ability to plot Voice Test status on Google maps.

The Call Control functions as well as the Send/Record voice functions can be run directly from the GLNetTestVQT app or remotely from VQuad™ using predefined VQuad™ scripts. GL WebViewer™ is used for retrieving and displaying the results and events directly from a web browser. Using this solution, testing can be accomplished between two rooted Android phones (both running the Android apps) or between the Android phone and any device connected to GL's VQuad™ with Dual UTA HD.”

Mr. Bichefsky further explained, “GLNetTest app on any Android or IOS mobile device performs both Video Conference and Data testing. The Video Conference testing, between any Android device and a Central Server, includes the ability to specify the exact Video parameters while returning Video and Audio MOS along with a variety of Video metrics.

The Data Testing includes TCP, UDP, VoIP, HTTP, FTP, and DNS testing from the mobile device. Results are returned to the mobile device while also saved to the Central Database. Both the Video and Data tests can be run manually or fully automated using the VQuad™ scripting.

In a nut shell, the GLNetTest and GLNetTestVQT, installed and running on your mobile phone,can support full testing of any network, anytime and from anywhere. Manual and Remote Automated operation is supported along with easy access to all results using the GL WebViewer™. In fact, not only can you view results in tabular and graphical formats, you can also plot results on Google Maps – great for drive or walk testing.”