Signaling that occurs between switches (such as PBXs, local exchange carrier and interexchange carrier) in telephone networks is sent either within the voice traffic or on a separate dedicated signaling channel.The Channel Associated Signaling (CAS) is a method of signaling where a channel or timeslot carrying speech also carries with it the signaling and addressing to set up and tear down calls. This supervisory signaling is carried as "on-hook" and "off-hook". The addressing is carried as DTMF (Dual Tone Multi Frequency) or as MF (Multi Frequency). This form of signaling is still used to route calls on the public switched telephone network (PSTN) including subscriber lines like 2wire local loops, on trunks between central offices (CO), and on access trunks such as PBXs.

GL's T1/E1 Cards and USB units provide T1 and VF I/O jacks through which one can monitor or inject audio signals from or onto a designated T1 timeslot, or VF line. The T1/E1 hardware test platform along with Analyzer and Emulator supporting legacy protocols can generate Selective SS-1/ SS-4, SS-5 Signaling, Voice Call Signaling, 2-wire Call, Single Frequency Signaling, MFC-R2 Analog, E and M signaling types of signaling and voice being carried over communication channel and is also capable of analyzing these signaling in real time.

GL’s T1 E1 test platform supports selective signaling in accordance with FAA-STD-054 for the analog G/G interface. SS1 Emulator (Dialer) application provides the ability to setup and dial tone sequences that make up SS1 dial digits. SS1 Analyzer detects and analyzes tone sequences that make up SS1 dial digits. Sequences of pulse and guard tones are detected, decoded, and assembled into their corresponding dial digits.  The tone sequences are also verified for compliance against a “specification” parameter which can correspond to published standards or user criteria.

In analog circuits, channel bandwidth is divided into a 300 – 3400 Hz “voiceband” used for speech and/or data, and a “supervisory band” centered at 2400/2600/2800 Hz used for the signaling tone.  Because both the supervisory signal (SF Tone on Idle and Active modes) and line traffic are carried in the same channel, filters are normally required at each end of the connection to separate out the line signal from the voiceband traffic.

MAPS™ CAS Single Frequency (SF) simulator can generate signaling tone on Idle and Active Modes with configurable operational frequency (2400/2600/2800 Hz) bands for analog G/G interface. It also has efficient filters to extract Voice from line signals and filters to inform the state of the remote-end efficiently.

Other related features include -

The following are the examples of Call Supervision in SF Tone on Active Mode and Idle Mode:

Voice call lines are typically used for four-wire, point-to-point, two-way voice calls.  A Voice detect (VOX) circuit is used on the receive pair to detect incoming audio and signal the voice switch.  No signaling is used on the transmit pair. These calls are sometimes configured on 2w circuits.

MAPS™ CAS supports Voice Call Signaling by providing voice activated circuitry (VOX) to control voice connectivity and ensure immediate activation of the circuit upon receipt of incoming voice. During out-going call, it seizes (open) any circuit designated by the Government as a voice call line and transmits the voice into the circuit, whenever the circuit is activated.


MAPS™ CAS supports Signaling System No 5 Line and register signaling procedure simulation as per Q.140- Q.199. SS5 specifications. SS5/ATS-No.5 call simulation is automated with ready-to-use scripts and facilitates to add events on active calls.
ATS-No.5 is a variant of SS5 signaling system, which is used in order to Seize a line, clear a line from either calling or called user side, block a line and answer a call. Line signals use one or two tones. VCSs are able to distinguish between different line signals by keeping track of the call state during the call setup or clearing procedure. Line signals can be sent from either side of an inter-VCS link. ATS-No.5-line signals are compelled implying that each line signal sent in one direction has a corresponding acknowledgement line signal in the opposite direction. 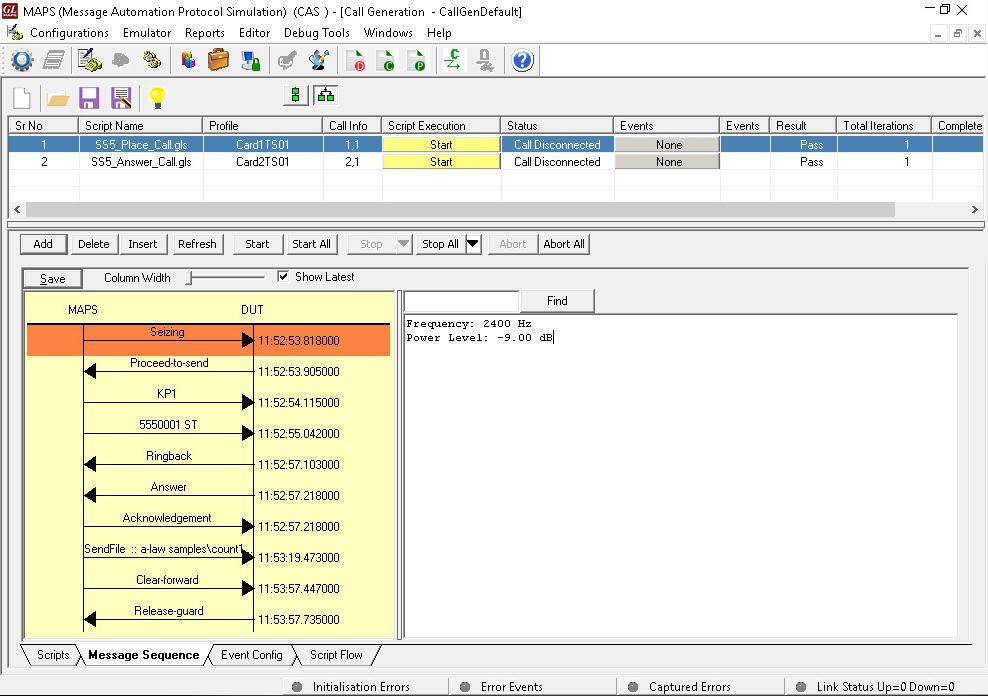