Welcome to another issue of GL Communications' Newsletter providing information and insight into our test, simulation, and monitoring systems for 911, E-911, and NG-911 networks, systems, and protocols. In this newsletter, we discuss protocol specifics of CAMA signaling in the 911 architecture and test solutions for the same.

A CAMA trunk connects a carrier switch directly to a Selective Router (SR), a special 911 Switch that in turn connects to many Public Safety Access Points(PSAPs).  PSAPs are call centers where agents answer emergency calls and dispatch police, firefighters, and ambulances.  The Selective Router routes the call to the appropriate Public Safety Answering Point (PSAP) based on the calling party’s physical location which is obtained from the Automatic Number Identification (ANI) transmitted using MF tones, i.e. the calling number.  For PSTN lines, a database lookup provides the physical location of callers against the ANI.

CAMA Signaling Simulation and Monitoring is accomplished using  MAPS™ CAS Emulator and MAPS™ FXO FXS Emulator hardware and software applications.  All of these are strictly over a TDM or Analog network.

For Analog simulation, MAPS™ CAS requires additional Channel Bank specially configured for CAMA. The tProbe™ T1 line is connected to Channel bank with FXO cards for interfacing to 2-wire equipment (911 selective router). Single FXO board within the channel bank can convert one digital T1 line into 8 Analog lines. MAPS™ CAS with Channel Bank can be used to simulate High density FXO supporting up to 96 Analog Channels.

The figure below shows tProbe™ FXS port connected to central office or selective router for terminating CAMA calls. The script will detect seizure from far side, provide wink, wait for ANI, and connect the call.

The MAPS™ FXO FXS Emulator application displays a real-time signaling sequence of the CAMA type trunk connected to the 911 Selective Route as shown below.

As shown in the above figure, MAPS™ CAS Emulator can be configured for CAMA signaling for emulation of 911 services on digital T1 trunks connected to the 911 Selective Router.
CAMA emulation capabilities include - seizure and wink start detection, onhook and offhook detection and MF digit (ANI) generation/detection.

The MAPS™ CAS Emulator application displays a real-time signaling sequence of the CAMA type trunk connected to the 911 Selective Router as shown below. 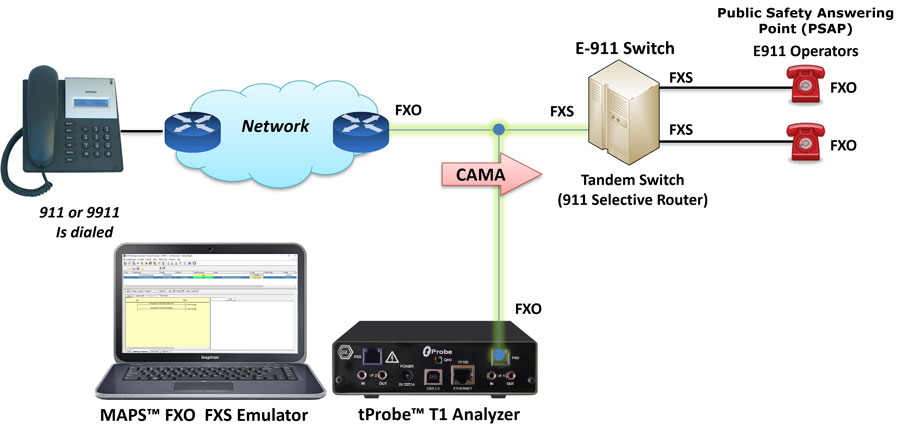 The following call is monitoring a 10-digit ANI transmission.

The monitoring script is used to monitor a CAMA line between the central office and selective router, or between the selective router and PSAP. This script continuously monitor line current and voltages of FXO and FXS ports. The script also monitors for seizure, wink, ANI, termination side offhook and plots the detected line voltage in User-Defined Graphs as shown below.

Please review the above and give us a call if you are interested in the above Product/software or for any other applications listed in our website. We would be happy to discuss your testing needs and we look forward to hearing from you.