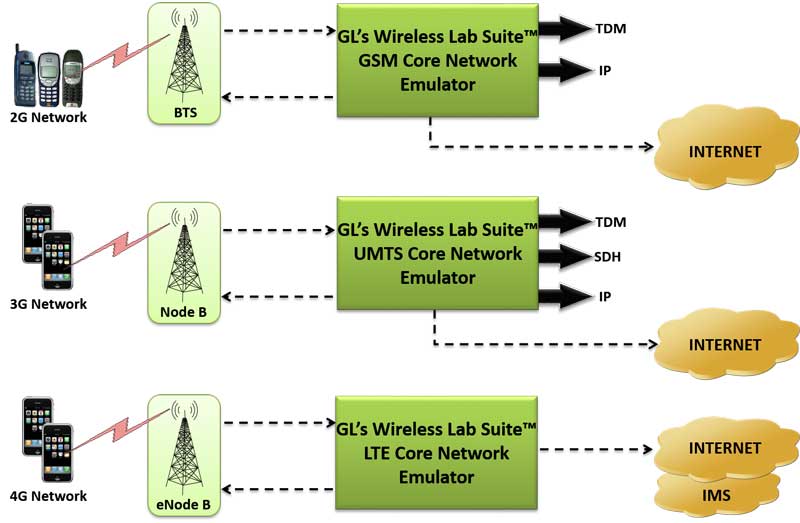 Speaking to the press, Mr. Jagdish Vadalia, a Senior Manager for product development of the company said, "GL's MAPS™ Wireless Lab Suite (2G, 3G, 4G, IMS) along with radio access elements is used to provide an advanced full-fledged network environment that enables user to test their applications, devices, and services on simulated wireless infrastructure environment prior to deployment on a real-time network. The wireless lab test suite is an invaluable tool for protocol characterization and testing, performance measurement, and training.

The test suite can be used to simulate all or specific elements within wireless networks infrastructure using simple ready-to-use test bed setups. The test systems allow for simultaneous execution of various test cases across networks. It also allows for performance and conformance testing compliant with 3GPP standards."

Circuit switched fallback (CSFB) is a technology devised to allow Voice services. LTE doesn't support circuit switched calls because LTE is packet-only technology. So, when a LTE device is used to place a voice call or send SMS, the device "falls back" to the 3G or 2G network to complete the call or to deliver the SMS.

The SGs Application Part (SGsAP) is used on the SGs interface between the Mobility Management Entity (MME) in the EPS and the Visitor Location Register (VLR). It allows location management co-ordination and relay certain messages related to GSM circuit switched services over the EPS system.

GL's MAPS™ CAMEL IP Emulator can be configured as SCF and SSF entities emulating CAP supplementary services such as unified messaging, and prepaid calls. For example, CAP controls SMS as a subscribed service, establishes relationship between the MSC and the gsmSCF. Initial DP SMS (IDP-SMS) operation is used to start the CAMEL service. The prepaid voice call procedure specifies the charging related information to be provided by the SSF and the conditions on which the information should be reported back to the SCF."