Welcome to another May 2013 issue of GL's Newsletter providing information and insight into our latest MAPS™ LTE Emulator for X2 Interface. Long Term Evolution is the all packet architecture that mobile networks are in the process of transitioning. It will permit vastly higher data rates to mobile smartphones, making voice, video, and data truly integrated for the first time - thru a single access technology. This is yet to be accomplished over wired networks. 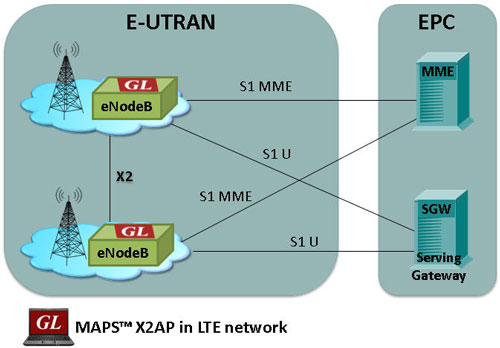 GL has introduced LTE X2 Interface Emulation to test and verify eNodeB implementations through its MAPS architecture. Message Automation & Protocol Simulation (MAPS™) is a multi-protocol, multi-technology platform used for the emulation of a variety of communication protocols over IP, TDM, and Wireless networks. MAPS™ can be used to test signaling over legacy networks (such as CAS, SS7, ISDN, PPP and more), IP networks (such as SIP, MGCP, MEGACO, SIGTRAN, Diameter...) and also Wireless technologies including GSM, UMTS, and LTE networks. Recently LTE X2-AP has been introduced.

Here, MAPS™ acts as Source eNodeB, and tests the DUT that is configured as Target eNodeB. MAPS™ initiates the messages towards the end-terminal and responds to messages from the DUT.

The test is performed to ensure that the MAPS™ X2 configured as Source eNodeB initiates the procedure by sending the HANDOVER REQUEST message to the Target eNodeB. The Target eNodeB (DUT) shall reserve necessary resources, and send the HANDOVER REQUEST ACKNOWLEDGE message back to the Source eNodeB. The call generation screen shot depicting the Handover Procedure flow is as shown below.

Call generated from other entity can be automatically detected in call reception window by pre-setting the required scripts in the Incoming Call Handler window.

This test is performed to ensure that the MAPS™ X2 configured as Target eNodeB in order to receive and process the Handover Request message from the Source eNodeB (DUT) in the X2 interface.

By default, all call handling scripts (irrespective of the type of the functions) are assessed by MAPS™ LTE S1 to provide statistical information about total calls, active calls, completed calls, passed calls, and failed calls. It is also possible to characterize the statistical information under different groups of call handling scripts under a unique heading.

For comprehensive information on the application, you can refer to the MAPS™ LTE for X2 Interface Emulator web page.