Are We Really Getting the Giga-bit Performance?

The High-speed Ethernet-based networks links are widely found in the local area, the metropolitan area, and the wide area networks, as it provides a cost-effective and less complex Ethernet solution to aggregate and manage data between different networks. However, unlike the TDM based circuits, the performance of Ethernet-based networks cannot be evaluated based only on the bit-error-rate (BER) and loopback testing. To fully validate network performance of Ethernet / IP network, the network operators need to perform RFC 2544 tests, Stacked VLAN and MPLS tests, traffic emulation, and multi-stream testing. 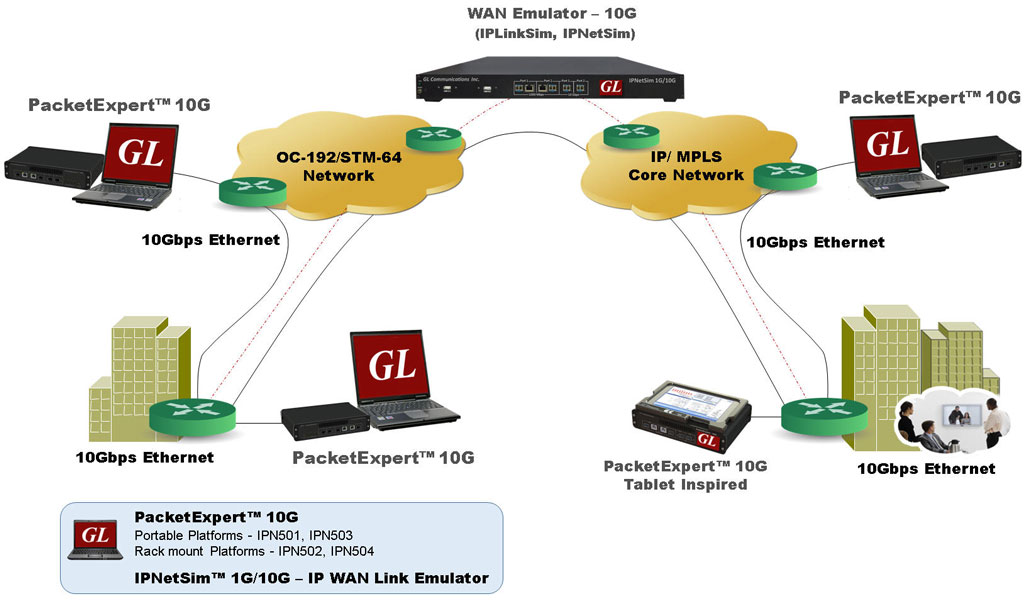 GL's PacketExpert™ is a hardware based test instrument suited for the installation, troubleshooting, and comprehensive testing of Ethernet/IP networks. PacketExpert™ can be used as a comprehensive Ethernet-IP Tester and perform all the network validation tests over electrical and optical interfaces, or used as an advanced WAN Emulator by emulating a WAN (wide area network) link between two local networks to test end-point devices and applications.

PacketExpert™ WAN Emulator can emulate a single link per board with varying capacities from 10Mbps to 1 Gbps interfaces. Multiple emulation engines are possible with High-Density PacketExpert™ boards. Available in 4, 12, and 24 port versions.

GL's PacketCheck™ is a software based Ethernet / IP test tool with BERT, multi-stream, throughput, delay, impairments, traffic generation features. Like Packetexpert™, it can perform testing at all protocol layers - from raw Ethernet frames to VLAN, MPLS, IP, and UDP packets.