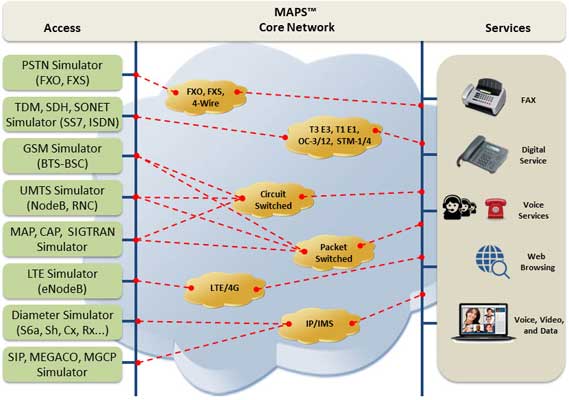 Speaking to the press, Mr. Vijay Kulkarni, CEO of the company said, “Message Automation and Protocol Simulation (MAPS™) platform is the basis for all signaling protocols and for traffic generation – whether voice, tones, digits, fax, data, or video.  It covers legacy PSTN, next generation VoIP, and Wireless equipment, interfaces, and networks. Interfaces can be Analog, TDM, Ethernet 10/100/1000/10,000, or Wireless.”

He added, “Testing network performance with high call volume is extremely important to Wireless Carriers, Internet Service Providers, and Equipment vendors so that to ensure quality of experience does not degrade with call intensity, volume, protocol, or traffic.  Also heavy loads, and stress do not degrade stability or scalability of the network, during pre- and post-deployment. And advanced features and services are not compromised due to call intensity or call volume.

Stress and loading processes can help test and simulate worst case scenarios and provide confidence that the network will continue to function under such conditions.

Bulk Call Generators require an advanced network appliance which can generate and sustain high volume of calls with heavy traffic.  If VoIP, then packets must be generated and output with high precision timing, zero packet loss and in the proper order.”

MAPS™ provides easy to use bulk call generation feature that allows quick configurations to create different test scenarios with scripts and profiles. These tests can be run simultaneously or sequentially (queue up tasks in succession). In addition, the Load Generation feature further allows the bulk calls to be generated with different statistical distribution patterns such as Uniform, Ramp, Sawtooth, Fixed, Normal, Step, and Step-Sawtooth distribution.