The WMATA currently operates a Comprehensive Radio Communications System (CRCS), consisting of simulcast trunked analog and digital voice channels, as well as simulcast telemetry for vehicle tracking. As part of the Dulles Extension Phase 2 project, several new metro stations are planned and under construction in that area, including the last two stations at Route-606 and Route-772. The WMATA has tasked GLCI to do a drive-test field study, to understand and document the existing CRCS SYSTEM radio coverage for the proposed Dulles Corridor extension area. As a result of this radio coverage assessment, GLCI advised that existing coverage in this area was sufficient, and that a new radio tower site in the vicinity of the last two stations was unnecessary.

GLCI identified the grids and routes/streets which need to be drive-tested to fully cover the area of interest. GLCI performed the measurements to record the Received Signal Strength Indicator (RSSI) for the Downlink signal, as well as Delivered Audio Quality (DAQ) for Uplink and Downlink, by driving along the identified routes and taking measurements at frequent intervals. Drive testing included the measurements in each of the ¼ mile square planned test grids, when possible. Both types of measurements will record the signal characteristics at each geographic point tested in a grid, along with a GPS tag to place the precise point (Latitude and Longitude), where each data measurement was taken, for use during post-process mapping. 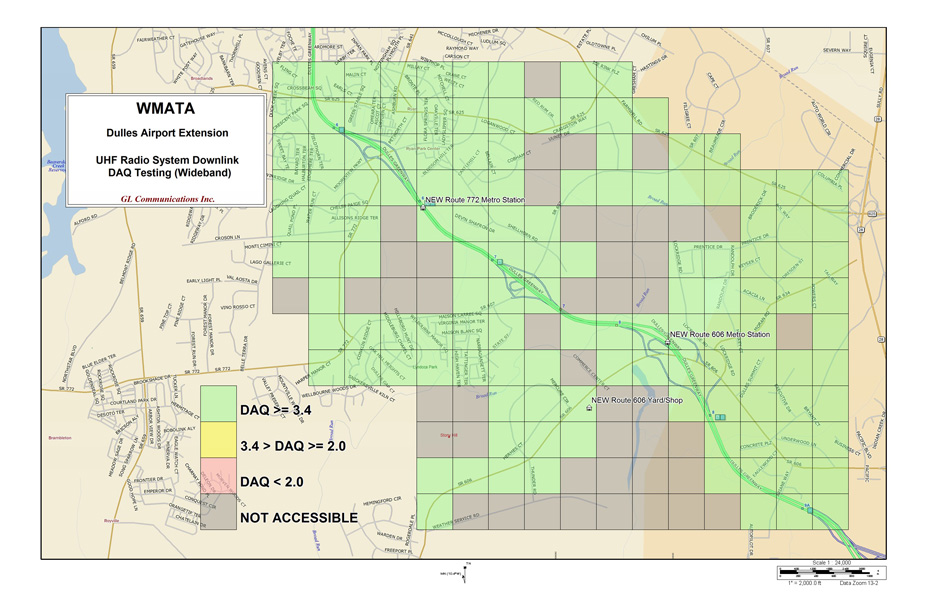