The South Coast British Columbia Transportation Authority (TransLink) required a study to identify problems and provide recommendations to improve the sound quality in SkyTrain stations and in railcars. These recommendations would improve the quality of the acoustics, i.e., the intelligibility and audibility of announcements in SkyTrain stations and onboard railcars. The recommendations were the result of acoustical modeling and simulations, and from an in-depth acoustical data analysis of speech transmission index (STI) measurements collected via on-site survey at SkyTrain stations and in two types of railcars. STI is a well-established objective measurement predictor of how the characteristics of the transmission channel affect speech intelligibility. The second purpose of the study was to identify short term and long term improvements in the overall architecture of the PA System including the transmission components between the Operations and Maintenance Center (OMC) and the stations/railcars. Project Management Principles and Earned Value Analysis were used to track the progress during the course of the project.

During the course of the LLPA Feasibility Study, GLCI provided several deliverables to TransLink.

The first deliverable that GLCI provided as part of the LLPA Feasibility Study was a memo that recommended sound quality standards to be implemented in TransLink’s LLPA system upgrade for the Expo and Millennium lines during the course of the next twenty years. GLCI surveyed the current climate of several international cities’ Public Address system acoustical quality requirements, and provided in this memo the sound quality standards recommendations. The memo also provided a comparison of these standards against the design criteria for the Evergreen Line.

The second deliverable that GLCI provided as part of the LLPA Feasibility Study was a Criteria Matrix. The purpose of this deliverable was to quantify the quality of sound output and ranking of deficient areas within a station and rail cars. The purpose was also to apply the methodology for identifying areas within a station that would benefit most from upgrades to the Public Address (PA) system, and to rank the stations of the Expo and Millennium line stations and rail cars according to the quality of sound output grading criteria.

Each station was divided into areas according to the general usage characteristic or function of the area as depicted in the Figure below in accordance with TransLink’s Wayfinding Classification.  The overall quality of sound output in each station area was evaluated using a grading system based on 5 key indicators from two categories of metrics.  A score for each station area was then calculated by proper weighting of the indicators to reflect their priorities.  This allowed GLCI to compare and rank the different areas within a station, and to identify areas that may be deficient or in need of attention.  For each station, a single station score was determined by averaging the scores from all areas within the station.  Finally, each station’s score was adjusted by a factor representative of the station’s relative importance in order to compare and rank all the stations of the Expo and Millennium line.

The third deliverable that GLCI provided as part of the LLPA Feasibility Study was a report on a Transmission Study. The purpose of this Transmission Study was to investigate and identify potential gaps and anomalies in the transmission of live voice and recorded announcements from the Operations and Maintenance Center (OMC) to the Expo Line (EL) and Millennium Line (ML) SkyTrain stations and rail cars. The study covered everyday operations, emergency situations and service disruptions that impact the ability of customers to clearly hear live voice and announcements.

The approach taken to identify gaps in the transmission system was to conduct an end-to-end investigative study. The LLPA system consisted of several subsystems that dealt with different physical medium (fiber, copper) and different protocols (analog voice, digital recordings, VoIP). Rather than conducting physical layer testing of the subsystems in a piece-wise manner, an end-to-end voice quality testing was deemed to be the best approach to conduct the study. The voice quality testing was focused primarily on the transmission of live and recorded announcements from the OMC to the EL and ML stations and to the rail cars.  For the purpose of this study, Edmonds station was chosen as the representative station for the Expo Line, and Braid Station as that for the Millennium Line.  For the rail cars, testing was performed on two different rail cars (Mark I and Mark II) parked in the OMC yard.

The general testing methodology involved the intrusive injection of stimulus audio messages (stored as WAV files) into the network under test, and the receiving and recording of the same audio messages at the destination point.  The stimulus audio files (referred to as “Reference Files”) were compared with the recorded audio files (referred to as the “Degraded Files”), using both subjective and objective analysis methods.  An overview of the objective analysis method is shown in the figure below.

The subjective method involved having a number of GLCI engineers listen to the recordings and determine the integrity and quality of the transmissions.  The objective method involved using GL’s specialized Voice Quality Testing (VQT) analysis software that utilized several industry standard ITU algorithms to produce a score that reflects the speech quality of a transmitted voice file.  GL’s specialized network test equipment was used at the OMC to inject stimulus files into the network under test. Complementary test equipment was used at the destination to record the received audio files.

The fourth deliverable that GLCI provided as part of the LLPA Feasibility Study was an Execution Plan. This document provided a general overview of GL’s execution plan for the assessment of all accessible Expo and Millennium stations, as well as two rail cars. It described the planning, assumptions, constraints, field activities, office activities, required coordination of activities, and customer communications necessary to successfully execute the project.

The fifth and final deliverable that GLCI provided as part of the Feasibility Study was the Final Report and LLPA Improvement Recommendations.

The recommendations formulated in these report were based on several methodologies, the two most important of which were the acoustic survey of sound quality, and the acoustic modeling of stations and railcars. Acoustic measurements of ambient noise levels, sound pressure levels, and speech intelligibility were made at multiple locations at each station and representative railcars (from Mark I and Mark II series). Using this data, station areas where sound pressure levels and/or signal-to-noise ratios are not adequate were identified. Non-working or improperly-working PA speakers were also identified in this survey. Some of the recommendations were developed after throughout analysis of the collected data.  The photos below show GLCI personnel in action during the station surveys.
Computer acoustic models for each one of five representative stations and two representative railcars (Mark I and Mark II) were created using EASE (Enhanced Acoustic Simulator for Engineers) software. The station drawings and the physical station measurements obtained from station surveys were used as the basis to create the models. Location and orientation of PA speakers and station material finishes were incorporated in the models. STI values resulting from the models were compared with actual STI field survey measurements to verify the accuracy of the models. After the computer models were verified for accuracy, simulations were performed by changing a set of parameters (all at once) that represent: (1) short-term, lower cost changes (“Tier 1” changes); and (2) long-term, higher cost changes (“Tier 2” changes). The two figures that follow are an example of this simulation. The first figure shows the existing STI Conditions at the Upper Ticket Hall Passageway at Burrard Station. The second figure shows the same area, with STI Conditions after Tier 1 changes were applied, namely the addition of a speaker, which resulted in a better audio coverage and a slight increase in STI.

The LLPA Feasibility Study concluded in station-by-station recommendations that were developed based on the analysis of the field collected acoustic data measurements and computer acoustical model simulations.

Example of Acoustical Modeling and Simulations 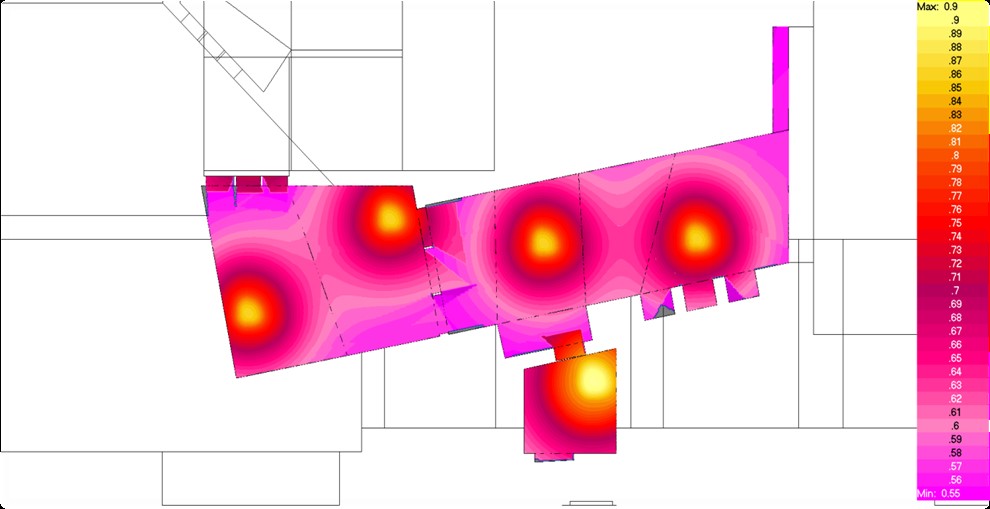